Powerplay in Paradise: Sino-Indian Tussle in the Maldives 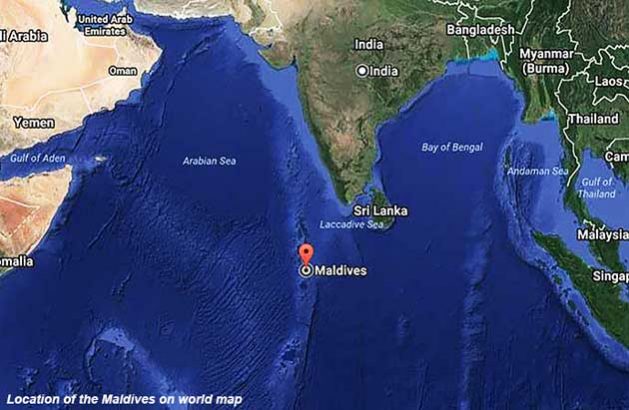 SINGAPORE, Aug 31 2020 (IPS) - The Maldives is a picturesque country of merely 515,000 people located just beyond the southern tip of the South Asian land mass, in an idyllic Indian ocean setting. The nation is spread across 26 pretty atolls, comprising about 1192 islets, not all still inhabited. These are lapped by crystal blue waters containing flora and fauna of remarkable magnificence. Its scenic bounties attract droves of tourists who frolic in the sands, sun and the sea in salubrious languor. It has a thriving fishing, garment and tourism industry which have recently helped it graduate out of the United Nations list of Least Developed Countries (LDCs).It is so tiny that used to be said that the catch of a single large fish any day could cause a remarkable jump in its Gross National Product (GDP) numbers. It is not without reason that the archipelago has often been compared to a paradise.

But now it appears that peace in paradise could be confronting some strains due to regional and international politics. On the global matrix China is racing to reach peer status with the United states. The Chinese see the Indians, because of the increasing chumminess between India and the US as an impediment to their aspirations. Hence they appear to be out to clip India’s wings. Obviously, the way to go about it is to try and reduce India’s regional and global influence. India obviously resists Chinese attempts to do so. The inevitable result is conflict, as of now confined to borders or Line of Actual Control (LAC), as it is called, in the Himalayan mountain heights. This is complemented by tussle for control of the seas south of the border as well. This strategic competition is not just confined to the military sphere. There is also an economic battleground. In this China’s great weapon is the ambitious Belt and Road Initiative (BRI), linking scores of nations along land and sea- routes to China through mega infrastructural projects. The Maldives, located at a strategic point in the Indian ocean, therefore, could not be immune to this Sino -China rivalry at worst, and competition at best.

The Maldives, whose size precluded it, or did not require for it to play a major role in the international arena, was always close to India in the past. But that was before the transformations in the global power-paradigm with the rise of China and the onset of a major Sino-Indian rivalry. As was to be expected this became a factor in the domestic politics of the Maldives. Former President Abdullah Yameen leaned towards China. There was a course correction in 2018 when the current President Ibrahim Mohammed Solih seemed to return to the Indian fold. In the meantime, China had already scored a few points by committing US $ 200 million to build the China Maldives Friendship Bridge. This would link the capital Male with the airport island, Hulhule. At the same time there was a clutch of Chinese investments. These included plans for constructing an airport runway and housing projects.

India has now responded with a massive offer of its own. It comes under an umbrella called the Greater Male Connectivity project. The idea is to link Male with three other islands: Villingli, Thilafushi and Gulhifalhu. This will be done through a bridge, a causeway and an embankment. There will also be a port constructed in Gulhifalhu. For these purposes India would advance a loan and a line of credit worth approximately US $ 500 million. The most important component would be the 6.7 km long bridge, the construction of which is now scheduled to begin later this year. The main problem with Indian commitments, in the Maldives, as elsewhere in the region, is in the area of implementation. Disbursement of funds is often painfully slow, and the progress with infrastructural construction even more so. But for now, the government of the Maldives was happy, and President Solih described the deal as a “landmark moment in Maldives-India cooperation”. It is likely that like many other nations in the region, the Maldives will endeavour to navigate carefully between the two powerful protagonists, China and India, and try to reap some benefits from their mutual jostling for position.

It is probably in order to delve a little into the background of intra-mural South Asian politics in this context. When the South Asian Association of Regional Cooperation (SAARC), the product of a Bangladeshi initiative, was still active, it provided a structural fence around the subcontinental countries, grouping them together, stressing commonalities. But India-Pakistan rivalry has now stalled the activities of the forum. People-to-people contacts within the SAARC framework ceased, as also any public predilection for cooperation. India has encouraged formation of sub-regional bodies in its stead, but Indian preponderance in these has curbed the enthusiasm of others. The smaller South Asian States psychologically feel freer to invite outside actors like China into their midst. So, the state of comatose that afflicts SAARC has actually encouraged smaller South Asian countries to seek external linkages to enhance their capability to deal with India, which will, nevertheless, always remain a major factor in their policies.

Secondly, as Prime Minister Narendra Modi of India and his Bharatiya Janata Party (BJP)continue to turn more and more towards the fundamentalist values of Hindutva to cement their support among the Hindu power-base , in opposition to the other major community in India, the Muslims, it is likely to impact on their co-religionists of the subcontinent negatively. This includes Muslim-majority countries of South Asia. Here the Maldives assumes a special significance as the Maldivians take their faith seriously, and the government, can ill- afford to ignore this fact in the long run. This is emerging as a major structural problem in BJP-led India’s regional external policy.

So tiny Maldives may be entering a new phase in its policies where powerplay of large global actors will have a role that might grow bigger with time. Its future, as that of many other countries in comparable milieu will be shaped by how deftly it is able to handle this evolving situation.

Dr Iftekhar Ahmed Chowdhury is Principal Research Fellow at the Institute of South Asia Studies, National University of Singapore. He is a former Foreign Advisor (Foreign Minister) of Bangladesh and President of Cosmos Foundation Bangladesh. The views addressed in the article are his own. He can be reached at: isasiac @nus.edu.sg

This story was originally published by Dhaka Courier.