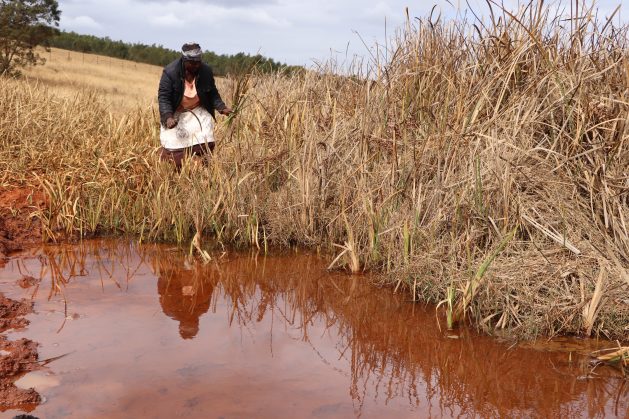 Sibonisiwe Hlanze is one of 600 women who are allowed to harvest reeds from the Lawuba Wetland in Lawuba, Eswatini. She generates a seasonal income from this which allows her to purchase farming inputs. Credit: Mantoe Phakathi/IPS

LAWUBA, Eswatini, Aug 10 2020 (IPS) - Sibonisiwe Hlanze, from Lawuba in Eswatini’s Shiselweni Region, lights up as she shows off her sleeping mat which she made from what she described as “the highest quality indigenous fibre”.

Hlanze boasts that she did not pay a cent for the likhwane (Cyperus latifolius) used to make mats that she sells to vendors from Eswatini’s commercial capital of Manzini. Instead, she simply walks a few metres to the nearby Lawuba Wetland where she collects the fibre during the harvesting season.

About 600 beneficiary women under the Methula Inkhundla (constituency centre) harvest fibre from the wetland in June from 7 am to noon.

“But now I prefer to only harvest and sell the raw fibre because I no longer have much time to make the mats,” Hlanze told IPS. She makes E200 ($11) from a bundle which is used to make handicraft items such as mats and baskets. Last season, she harvested about 10 bundles.

“Some women prefer to buy the fibre instead of going to the wetland to harvest for themselves because they find it tedious,” Hlanze told IPS. “The wetland has provided me and other women with a source of income because we’re unemployed.”

Considering that this is seasonal income, Hlanze said she uses this to make money to buy farming inputs.

Nkhositsini Dlamini, the secretary for Lawuba Wetland, concurs with Hlanze adding that in one season she generated E23,000 ($ 1,310) from sleeping mats whose fibre she harvested from the wetland. She sells her handicraft in Johannesburg at a higher price compared to when selling in Eswatini. Sleeping mats go for E300 ($ 17) in South Africa.

“My child was admitted at the university but didn’t get a scholarship,” Dlamini told IPS. “I used that money to pay for the fees.”

Besides the fibre plants such as likhwane, inchoboza (Cyperus articulates) and umtsala (Miscanthus capensis), which are used for handicraft products, she said, there are indigenous medicinal plants at the 21-hectare natural wetland which help to heal various ailments such as scabies. The community also established a livestock drinking trough and a vegetable garden which draws water from the wetland.

Dlamini, however, states that the community was on the verge of losing this asset because it had become degraded over the years. For many years, she said, livestock used to graze from the wetland while local women were over harvesting the fibre. As a result, it was losing its spongy effect of storing water.

“The amount of fibre available at the wetland was significantly reduced, not to mention the number of cattle that used die after getting stuck in the mud,” said Dlamini.

The state of the wetland concerned Deputy Prime Minister Themba Masuku, who approached Eswatini Environment Authority (EEA) to support the community to protect it. Masuku, who is also a resident of the area, said he decided to act after noticing that the wetland had lost some of its indigenous plants such as reeds and experienced other biodiversity loss of animal species such as birds and snakes. It was also drying up.

“This wetland feeds the Mhlathuze River,” said Masuku in an interview with IPS. “It is also a source for a downstream dipping tank.”

Through the National Environment Fund, the EEA provided fencing material to prevent livestock from grazing and drinking from the wetland. The EEA partnered with World Vision who provided food aid for residents who constructed the fence under the Food for Work Programme. This was after the EEA had educated the community about the benefits of the wetland to their lives. The construction of the protection fence took place between 2010/11. EEA has protected 12 wetlands in the country using this fund.

“Once people know and see the benefits of conserving the environment, their attitudes and their behaviour change,” said EEA ecologist, Nana Matsebula. This was corroborated by a study done a University of Pretoria student, Linda Siphiwo Mahlalela, titled Economic valuation and natural resource rent as tools for wetland conservation in Swaziland: the case of Lawuba wetland.

The study found that there is sufficient evidence to suggest that households at Lawuba have high levels of knowledge about the benefits of conserving the wetland and the threats that endanger it. It also found that households have positive attitudes towards its conservation with income seemingly having influence towards this behaviour.

Matsebula said the community realised that the wetland also had a cultural value to the Swati nation.

“A sleeping mat comes from a wetland,” said Matsebula. “Besides using it for sleeping and sitting, no one in our culture gets buried without a sleeping mat.”

The mat is also one of the significant items at traditional weddings.

Besides the economic value of the wetland, Matsebula told IPS, the community was also educated on the ecological benefits. These include acting as a flood control by absorbing water during rain, replenishing the water table and acting as a reservoir for a diverse biodiversity.

“Wetlands are also important for climate change mitigation because they trap carbon up to 50 times more compared to forests,” he said, adding: “Wetlands take up to only 3 percent of the world total land area yet they hold up to a third of the world’s total carbon.”

Matsebula said environmentalists have over the years shifted from talking about preservation to conservation. The latter emphasises sustainable use of natural resources while the former discourages use altogether.

“It has been proven that when people realise benefits from the environment, they are most likely to protect it,” he said.

But the wetland faces a threat from poor regulation. Criminals have also started to steal parts of the fence. Masuku said for this wetland, and others to be adequately protected, the government needs to take over its administration so that it is declared a national asset. While the community will continue to have the primary responsibility to protect it, the government should support with its monitoring and regulation.

“We need political commitment in the regulation of harvesting fibre and drawing water from the wetland,” said Masuku. “We also need stiff laws that will ensure criminals who steal the fence protecting wetlands are punished.”

For now, there are no permits and the users of the natural resources from the wetland regulate themselves.