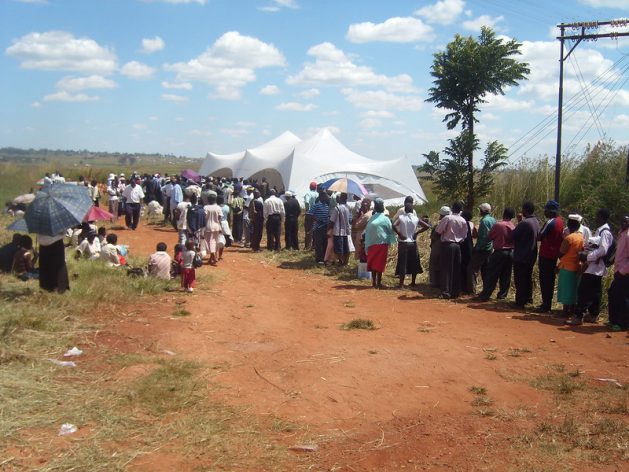 Zimbabwe’s political parties are engaged in internal processes to choose representatives for positions that range from district coordinating committees to local councils and by-elections for vacant legislative seats. But the process has been marred by violence and verbal attacks by competing candidates. This dated photos show voters queuing to cast ballots. Credit: Taurai Maduna/IPS

BULAWAYO, Zimbabwe, Nov 6 2020 (IPS) - “I have long given up on active politics,” Gertrude Sidambe, a 36-year-old member of one of Zimbabwe’s opposition parties, tells IPS.

When female members of the ruling Zimbabwe African National Union – Patriotic Front complained last month about political violence as male members chose brawn over brains to solicit for positions, the party’s National Secretary for Women’s Affairs Mabel Chinomona advised that they enter the punch-and-insult battlefield and “fight” like everyone else.

The violence has pushed women further away from the bruising contests. Yet it has become another reminder of the country’s commitments – or lack thereof – toward gender inclusivity and parity and the conditions women face in their aspirations for political office.

“At one time I was confident my many years in the forefront would culminate in running for public office but that never happened, and that’s not because I did not try. Everyone appeared to think men could do a better job,” Sidambe says.

She made the comments at a time when Zimbabwe’s political parties are engaged choosing representatives for positions that range from district coordinating committees to local councils and by-elections for vacant legislative seats.

Sidambe’s disillusion with party politics is not unusual or isolated.

The main opposition Movement for Democratic Change Alliance (MDC-A) has also not been spared.

The party has put in motion internal processes to elect representatives who will contest for vacant parliamentary and local council positions once the government lifts the moratorium on by-elections because of coronavirus fears.

Last month, government was taken to court by female aspiring candidates challenging the indefinite suspension of the by-elections.

The court action is being supported by the Women’s Academy for Leadership and Political Excellence (WALPE), a local NGO lobbying for the equal representation of women in public leadership positions.

According to WALPE, there are 35 vacant parliamentary seats, while 55 local council wards are yet to be filled and the suspension of the by-elections “violates people’s rights to be represented whoever they want”.

“It has been normalised that women are mobilisers for male candidates, but there comes a time when you become tired and just quit after you ask yourself ‘what’s in it for me?’” Sidambe says, highlighting a recurring motif each time the Zimbabwe’s political parties prepare for elections.

Priscilla Misihairambwi-Mushonga, an opposition legislator in Zimbabwe, says there are no binding codes of conduct within political parties regarding gender parity and this has allowed the pushing of women to the periphery of political participation.

“There are simply no internal party rules that ensure political parties live up to their proclamations for women to be part of leadership,” Misihairambwi-Mushonga tells IPS.

“Political parties are operating without rules. It is a law of the jungle, there are no codes of conduct that are sanctionable. It’s just words and they are not accountable to anybody,” she says.

The internal processes of Zimbabwe’s main political parties reflect the skewed balance in national political leadership where in 2018 elections, out of 210 parliamentary seats, 26 were taken by women.

This is despite Zimbabwe’s commitment to the Southern African Development Community’s Declaration on Gender and Development which seeks 50-50 representation of men and women in parliament.

A 2018 report by the International Foundation for Electoral Systems titled Violence Against Women in Elections in Zimbabwe, found that women “fear both profound physical violence in their relation to their electoral participation”.

The report further notes that women who make it to parliament are not safe either.

“Even once elected to parliament, women cannot escape degrading commentary; ‘a woman still cannot question an MP without being told [her] thighs are too big.’ If she is unmarried, she is accused of entering politics to find a husband. ‘If she can’t run a household, how can she run a constituency?’” the report says, citing interviews from respondents.

Smart Mabweazara, a researcher and academic at the University of the Western Cape in South Africa, believes perceptions about political participation of women need to change.

“Women are typically afraid of this male dominated playground where some perceive their participation as a waste time,” he tells IPS, echoing sentiments of young political hopefuls such as Sidambe.

However, Misihairambwi-Mushonga notes that this has been perpetuated by a lack of hard and fast rules that would impose punishment on political political parties.

“There is no recourse for women who have such complaints within those political parties.

“As it is, it not surprising that political parties are doing what they are doing because they know there are no hurtful sanctions for that kind behaviour,” Misihairambwi-Mushonga tells IPS.

One way to balance the scales and protect women in Zimbabwe from exclusion in political positions is to create stiffer penalties for political parties, Misihairambwi-Mushonga says.

“Parties already in parliament can be punished through political party financing by giving more to political parties that have more women candidates and punish the party with few women. There must be a reason for good behaviour and pay dearly for bad behaviour,” she says.

In February this year, the United Nation’s Committee on the Elimination of Discrimination against Women “called on Zimbabwe to improve implementation of laws and compliance with the U.N. conventions,” while pointing to the “huge gap between the excellent text (of the country’s Constitution) and its application”.

As part of efforts to highlight the dearth of women in public office, the Women’s Academy for Leadership and Political Excellence (WALPE) launched a web drama series titled “All Female Parliament” on Oct. 13.

The drama’s brief says among other things, it aims to encourage “women and girls to be bold and take up leadership positions. It brings out how against all odds women came together, resisted patriarchy and worked together for the betterment of the country”.

“Political parties are insincere about the inclusion and participation of women. They make is hard for women,” Batanai Gwangwawa, WALPE programme manager, tells IPS.

“The electoral environment is also very violent which makes women shy away from political participation. Where a woman defies the system, she will still have face other challenges men do not face. Women aspiring candidates are subjected to verbal abuse at the highest level, and more now misogyny,” she says.

Zimbabwe’s holds national general elections in 2023 but with political jostling coming early with the internal elections within political parties, there is little to show that the scales will be tipped in favour of women.