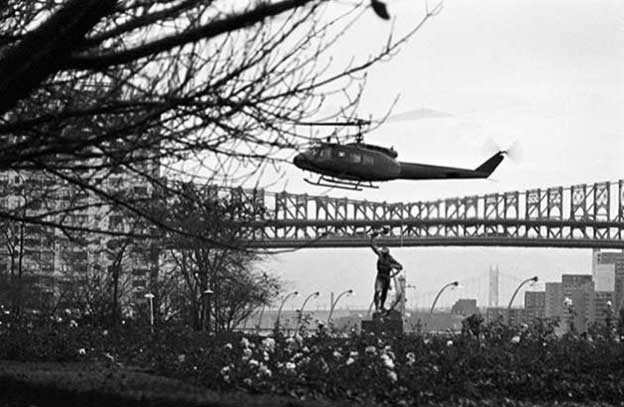 UNITED NATIONS, Dec 22 2020 (IPS) - The United Nations, which is commemorating its 75th anniversary, continues to remain bogged down in one of the world’s most politically and militarily volatile regions: the Middle East.

Virtually every other week, the Security Council has a predictable item on its agenda: “consultations on the Middle East”—perhaps a never-ending saga.

And more recently, it includes the military conflict in Yemen (described as the world’s worst humanitarian disaster, with an estimated 24 million people – close to 80 per cent of the population –in need assistance and protection), along with civil wars and insurrections in Syria and Libya.

But the Security Council’s worst nightmare is the Israeli-Palestinian conflict – and the demand for a Palestinian homeland – which remains unresolved after more than 50 years of death, destruction—and discussions.

Still, the late Yasser Arafat, the leader of the Palestine Liberation Organization (PLO) was offered the UN podium only once in his lifetime.

When Arafat was denied a US visa to visit New York to address the United Nations back in 1988, the General Assembly defied the United States by temporarily moving the UN’s highest policy making body to Geneva– perhaps for the first time in UN history– providing a less-hostile political environment for the leader of the Palestine Liberation Organization (PLO).

On his 1974 visit, he avoided the hundreds of pro and anti-Arafat demonstrators outside the UN building by arriving in a helicopter which landed on the North Lawn of the UN campus adjoining the East River.

When he addressed the General Assembly, there were confusing reports whether or not Arafat carried a gun in his holster—“in a house of peace”– which was apparently not visible to delegates.

One news story said Arafat was seen “wearing his gun belt and holster and reluctantly removing his pistol before mounting the rostrum.” “Today, I have come bearing an olive branch and a freedom-fighter’s gun. Do not let the olive branch fall from my hand,” he told the Assembly. But there were some delegates who denied Arafat carried a weapon.

Iftikhar Ali, a longstanding UN correspondent for the Associated Press of Pakistan (APP), who has covered General Assembly sessions since 1971, told IPS Arafat’s helicopter landed in the UN’s North Lawn around 3 am.

Among those who received him was UN Chief of Protocol Aly Teymour of Egypt– whose father was chief of protocol for King Farouk– and who handled all arrangements for Arafat’s stay overnight in the UN Secretariat because of security risks of putting him up in a New York hotel.

The helicopter carrying Arafat was the second to land — the first one was probably a decoy, Ali said. “There were some cameramen present at that unearthly hour and only two print media reporters– the late Tony Goodman of Reuters and myself. Arafat was escorted by security men into the UN building and to the Secretary-General’s 38th floor where he spent the night in a temporary bedroom”.

But that bedroom had not been used for years, and the colour of water was brown when the bathroom’s faucet was opened. Mercifully, it was not an attempt by Israeli intelligence to poison the PLO leader.

There was also another legendary story that Arafat, who was a potential target for assassination by the Israelis, apparently never step in the same bed two consecutive nights.

Meanwhile, Palestine, which was never afforded the status of a full-fledged UN member state pulled off a coup when the 134-member Group of 77, the largest single political coalition at the UN, elected it as its chairman, back in 2018, much against US protests.

Nikky Haley, the vociferously anti-Palestine US Ambassador to the United Nations, warned member states she will “take down names” of those who vote against American interests in the world body—perhaps with the implicit threat of cutting US aid to countries that refuse to play ball with the diplomatically-reckless Trump administration.

But that vengeance-driven head count — and no ball playing — could be a tedious exercise for the US when 146 out of 193 member states voted in the General Assembly to affirm Palestine as the new chairman of the Group of 77. The 146 included some of the strongest Western allies of the US, plus four of the five permanent members of the UN Security Council: UK, France, China and Russia.

Although Arafat made it to the UN, some of the world’s most controversial leaders, including Iraq’s Saddam Hussein, Syria’s Hafez al-Assad and his son Bashar al-Assad, and North Korea’s Kim il Sung and his grandson Kim Jong-un never made it to the UN.

Libyan leader Muammar Gaddafi, however, did make a visit to the UN in September 2009. In its report, the London Guardian said he “grabbed his 15 minutes of fame at the UN building in New York and ran with it. He ran with it so hard he stretched it to an hour and 40 minutes, six times longer than his allotted slot, to the dismay of UN organizers”.

Gaddafi fully lived up to his reputation for eccentricity, bloody-mindedness and extreme verbiage, said the Guardian, as he tore up a copy of the UN charter in front of startled delegates, accused the Security Council of being an al-Qaida like terrorist body, called for George Bush and Tony Blair to be put on trial for the Iraq war, demanded $7.7 trillion in compensation for the ravages of colonialism on Africa, and wondered whether swine flu was a biological weapon created in a military laboratory.

Incidentally, according to one news report, there were 112 different spellings of the Libyan leader’s name, both in English and in Arabic, including Muammar el-Qaddafi, Muammar Gaddafi, Muammar al-Gathafi, Muammar El Kadhafi, Moammar el Kazzafi, Moamer, El Qathafi, Mu’Ammar, Gadafi, and Moamar Gaddafi, amongst others.

The Wall Street Journal ran a cartoon making fun of the multiple spellings, with a visiting reporter, on a one-on-one interview in Tripoli, telling the Libyan leader: ”My editor sent me to find out whether you are Qaddafi, Khaddafi, Gadafi, Qathafi or Kadhafi?”