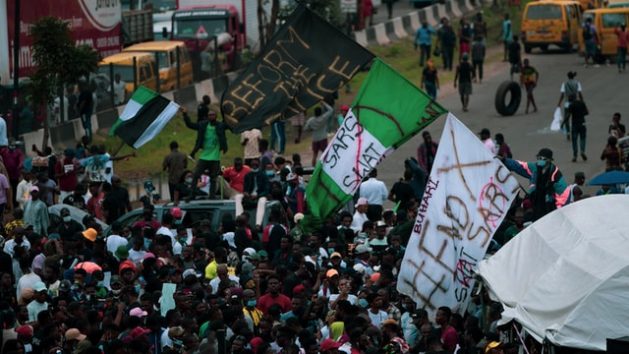 Youth in Nigeria protested against the brutalities and extrajudicial killings by the rogue police unit known as SARS. The #EndSARS protests became a global movement as international corporations and celebrities offered their support.Photo by Ayoola Salako on Unsplash

Jan 28 2021 (IPS) - As Nigeria’s biggest city, Lagos, reportedly experienced a massive shortage of oxygen cylinders last week — with demand increasing fivefold in one of the city’s main hospitals just as the country recorded some of its highest number of coronavirus cases — its youth leaders are concerned about the impact on vulnerable women.

“It is a dire situation across the country, not only in Lagos state,” Kelechukwu (Lucky)Nwachukwu, a Nigerian feminist and activist, told IPS. “Many health facilities are largely underfunded with minimal to zero equipment. What is concerning is what this means for vulnerable women and girls who need regular health services and attention.”

“Our health sector is struggling per usual,” says Obianuju Maria Onwuasor, founder of PeriodRichOrg, an organisation working at the intersection of human rights and reproductive justice, commenting on the country’s low health budget. “The health sector alone ruins all the work of other thriving agencies without trying too hard.”

Both Nwachukwu and Onwuasor are youth ambassadors in Nigeria for Women Deliver, a gender advocacy organisation. Through their work, the ambassadors examine the intersection of sexual and reproductive health with other issues: from COVID-19 to the #EndSARS movement.

In October, massive protests broke across the country, demanding an end to the killing of civilians by the police force and the Special Anti-Robbery Squad (SARS) authorities for almost three decades. The #EndSARS protests became a global movement as international corporations and celebrities offered their support.

Onwuasor of PeriodRichOrg told IPS that gender equity plays a crucial role in the end of police brutality, and in turn, the achievement of the Sustainable Development Goals (SGDs) in Nigeria.

“Far too many times, women and girls have been indiscriminately arrested and put behind bars for many frivolous reasons such as being outside too late in the night, being ‘prostitutes’, or evening just being women,” added Nwachukwu.

“In the wake of the protests, many states imposed total curfews,” he told IPS. “These curfews limited many people, especially vulnerable groups from accessing health, and sexual and reproductive health and rights (SRHR) facilities.”

Inter Press Service (IPS): What are your thoughts about the government’s response to COVID-19 in Nigeria?

Obianuju Onwuasor (OO): I feel like the government is doing their best in some sectors; we have government ministries like the Central Bank of Nigeria (CBN) who have set measures in places to tackle the impact of the coronavirus; CBN has funds in place to help/support households and SMEs, and they also reduced interest rates on intervention loans. Nigerian Customs reduced its tariffs on custom duty charges.

Kelechukwu Nwachukwu(KN): There have been concerns about the testing capacity and numbers given the population of Nigeria. I believe given the resources available, Nigeria is doing her best to handle the situation. There has been massive sensitisation and awareness creation.

However, the Nigerian government should make walk-in test facilities available as well as subsidised testing costs for Nigerian citizens. I also think it is a critical time for Nigeria to review and strengthen our health systems and infectious diseases response mechanism. Nigeria must make a statement to be committed to improving the health indices of the country by investing intentionally in health care for all.

IPS: How has the #EndSARS movement impacted the specific issues you work on?

OO: At PeriodRichOrg, our primary goal is to create a platform that’s safe to talk about human rights as it relates to sexuality, sexual health and reproduction. During October’s Lekki massacre that killed 12, we witnessed peaceful protestors trying to save a gunshot victim the wrong way. Through my reach and multiple re-shares, I was able to create infographics that helped provide better understanding on how to better handle situations like this.

KN: As an activist, campaigner and development worker, one cannot anymore carry on normal operations and day to day work of social commentary, community interventions and activism without being labeled as an opposition or being part of the #EndSARS movement. But it is only a matter of time and all Nigerians desirous of lasting peace and respecting human rights will ride on shoulders of giants who are the feminists that championed this cause in addition to thousands of Nigerians who stood up to face the singular enemy.

IPS: The SARS force has been around since 1992. How does it affect gender rights?

OO: The role of gender equality in policing cannot  be overemphasised as it’s important in achieving SDGs five and 16 — the elimination of violence against women, and strong and stable judicial institutions. These goals can only be achieved by creating the right composition and culture of our nation’s policing force which isn’t happening at the moment.

KN: Many women, girls and vulnerable groups in Nigeria have long suffered from injustices from SARS. In addition to gender rights, violations have been exacerbated against sexual and gender minorities in Nigeria such as the LGBTQ+ community.

IPS: According to Amaka Anku, head of Africa Practice at Eurasia Group, the movement will likely lead to higher political turnout in 2023 and has “helped define campaign issues”. What policies in your area of work do you think should be prioritised for 2023 elections?

OO: What could be learnt from this #EndSARS movement is the amount of power we have when we all have one voice. All core demands may not have been met but our voices were heard across the world. We clamored and the world responded to our shouts and screams.

As regards to political turnout in 2023, in the past in Nigeria mostly the uneducated came out to vote. But with the #EndSARS peaceful protests, we could see people from all walks of life come together to fight for one cause. If this happens in 2023, we would probably have campaigners who want to address the issues we constantly complain about, younger people who have come out to run for electable positions, more voter turnout and conscious politicians who know that they would be held accountable for their actions. Our biggest issue in Nigeria is bad leadership and governance, and once we can resolve this pending issue we are one step closer to finding solutions to all the numerous issues we face daily.

In the 2023 elections, I am hoping that the government pays attention to policies that relate closely to SRHR and gender equality, including policies addressing female genital mutilation (FGM), easy access to contraceptives, and safer abortions.

KN: It is true that the movement will trigger a lot more conversations and discourses around key issues. On a professional level, I am keen to see the protection of the rights of LGBTQI+ persons in Nigeria – it is of paramount importance that the Same Sex Marriage (Prohibition) Act be revisited, repealed and thrown out the door. Sexual and gender minorities in Nigeria must enjoy protection from the law as well as fundamental human rights enshrined in the constitution.

In addition, sexual and reproductive rights of women, girls and vulnerable populations should be at the forefront of policies. We have seen the global pandemic expose the deeper vulnerabilities these groups face. Women and girls should be allowed free and unhindered access to reproductive services such as safe and legal abortion, quality of care and an end to menstrual poverty.

Finally, the government must come out boldly to work towards the end of FGM which has affected over 200 million women and girls globally. Until there is a political will from both government and donors, little progress will be made.