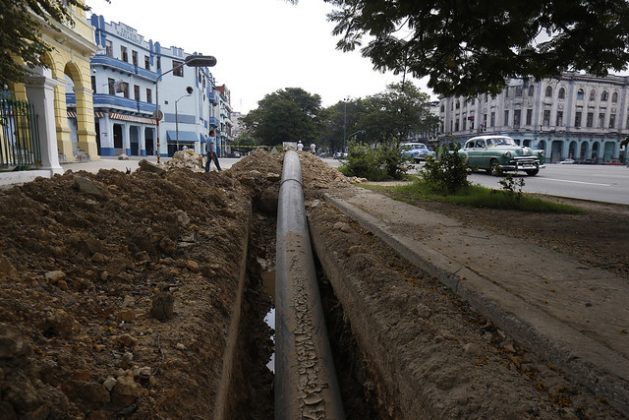 High-density polyethylene pipe is laid on a street in the Cuban capital, where the Aguas de La Habana water company is upgrading the water supply networks in the municipality of Centro Habana. CREDIT: Jorge Luis Baños/IPS

HAVANA, Feb 23 2021 (IPS) - With the construction of aqueducts, water purification and desalination plants, and investments to upgrade hydraulic infrastructure, Cuba is seeking to manage the impacts of droughts and floods that are intensifying with climate change.

The “initiative to strengthen hydrological monitoring” in Cuba, signed in Havana on Feb. 11, aims to boost capacities to measure, transmit, process and analyse hydrological variables and systematically assess water availability at the national level.

According to water sector authorities, the modernisation and optimisation of hydrological observation networks will be an essential component of early warning systems for floods and droughts.

The initiative will be implemented by the National Water Resources Institute (INRH), with the support of the United Nations Development Programme (UNDP) and funding from Russia.

It also plans to redesign the observation network for both groundwater and surface water quality, explained INRH Director of Hydrology and Hydrogeology Argelio Fernandez.

The initiative is in line with Sustainable Development Goal (SDG) 6, which calls on governments to ensure availability and sustainable management of water, as well as sanitation.

It also responds to national policies and priorities contained in “Tarea Vida”, the government plan in place since 2017 to address climate change.

Among its multiple strategic guidelines, the plan aims to ensure the availability and efficient use of water to cope with droughts, based on the application of technologies to save water and meet local demand.

It also urges the optimisation of hydraulic infrastructure and its maintenance, as well as the introduction of actions to measure water efficiency and productivity. 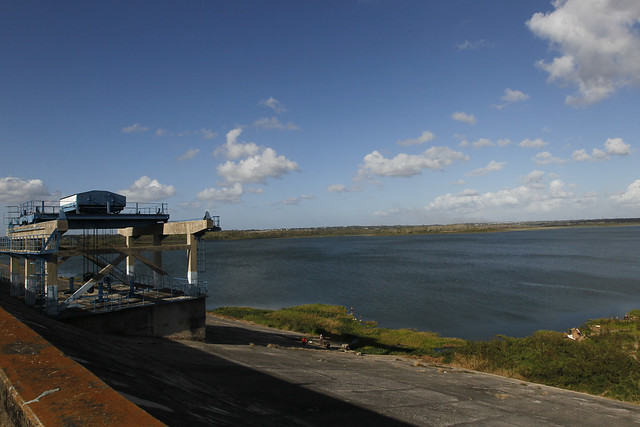 The Ejército Rebelde reservoir is located near the Parque Lenin recreational complex in Havana. Cuba has more than 240 dams with a reservoir capacity of over nine billion cubic metres of water, as part of the infrastructure designed to guarantee a water supply to the population and promote industrial development plans, agricultural irrigation and flood control. CREDIT: Jorge Luis Baños/IPS

The long, narrow shape of the island of Cuba, the largest in the Cuban archipelago, means many rivers are short and the water flow is low and highly dependent on rainfall, more abundant in the May to October wet season and during the passage of tropical storms.

With average annual rainfall of 1,330 mm, the records show that rains are increasingly scarce, particularly in the eastern region where the country’s longest and largest rivers, the Cauto and Toa, respectively, are located.

From 2014 to 2017, the country faced the greatest drought in 115 years, affecting 70 percent of the national territory.

Studies predict that Cuba’s climate will tend toward less rainfall, higher temperatures and more intense droughts, and that by 2100 water availability could be reduced by more than 35 percent.

Another consequence of climate change is that sea levels are projected to rise, a phenomenon that will aggravate saltwater intrusion, to which 574 human settlements and 263 water supply sources are currently vulnerable, according to official figures.

Law No. 124 of the Land Water Law has been guiding the integrated and sustainable management of water since 2017, while the new constitution in force since April 2019 protects the right of Cubans to drinking water and sanitation, with due remuneration and rational use.

Since 1959, the government has promoted an ambitious engineering programme for artificial water reservoirs, to guarantee the water supply for a population that almost doubled to 11.2 million inhabitants since then, and to promote plans for industrial development and agricultural irrigation.

The data shows that from just over a dozen small reservoirs six decades ago, there are now more than 240 in the 15 provinces and the special municipality of Isla de la Juventud – the second largest island in the archipelago – with a storage capacity of more than nine billion cubic metres. 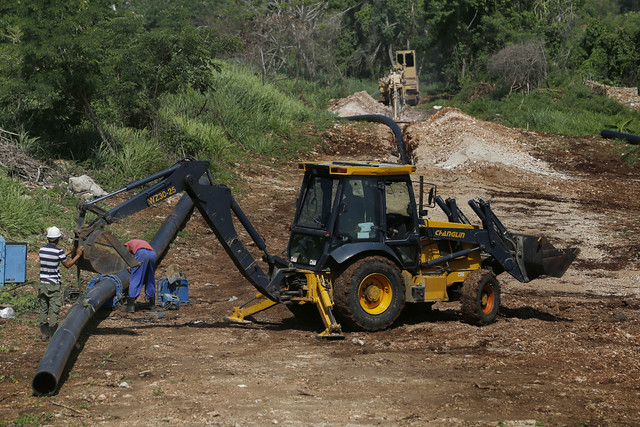 Workers of the Aguas de La Habana water company lay a high-density polyethylene pipe to supply drinking water in the Peñas Altas district, near Guanabo beach, in eastern Havana. Part of the hydraulic investments made by Cuba in the sector are supported by international cooperation through projects and funds from other countries and international organisations. CREDIT: Jorge Luis Baños/IPS

Despite the economic crisis the country has suffered for three decades and the impact of the U.S. embargo since 1962, in recent years millions of dollars have been invested to mitigate the water deficit and improve water quality.

Among the engineering works, the water transfer aqueducts stand out, with more than a dozen throughout the country, considered strategic pillars in building resilience to the effects of climate change.

These interconnected systems of dams, canals, aqueducts, tunnels and bridges transfer water hundreds of kilometres from places where it is abundant to agricultural and industrial areas and human settlements.

They also make it possible to control floods, lessen the impact of drought and allow the siting of hydroelectric power plants.

Cuba has three plants that produce high-density polyethylene pipes 1,200 mm in diameter for laying new aqueducts and to replace the aging and leaking hydraulic infrastructure that in some cities is over 100 years old.

It also seeks to prioritise the manufacture of fittings and parts for domestic water supply networks, where almost a quarter of the piped water is lost.

Of the total investment in the water system, which in recent years has averaged more than 400 million pesos (16.5 million dollars) a year, more than half comes from the government budget for construction and assembly.

The rest comes from international cooperation through projects and funds from nations such as Saudi Arabia, Kuwait, Japan, Spain, France and the OPEC Fund for International Development.

Thanks to these investments, in the 2018-2020 period, desalination plants were inaugurated in the provinces of Havana, Matanzas, Santiago de Cuba, Granma, Guantánamo and the municipality of Isla de la Juventud, in order to create easy access points in populations affected by high levels of salinity in their water supply sources.

Meanwhile, in Camagüey, the third most populated city in Cuba located 538 km east of the capital, a water treatment plant with a capacity to process 1,800 litres of water per second is nearing completion, which will make it the largest in the country.

Although the water that reaches most homes is treated and chlorinated, people remain concerned about the presence of microorganisms or salt that require boiling.

“It would be useful if shops sold water filters more frequently and at affordable prices, because they help protect our health,” a Havana resident, Yolanda Soler, told IPS.

However, building resilience also involves encouraging a water culture in the business and private sectors and among citizens as a whole, hydroeconomics engineer Luis Bruzón, who lives in the western province of Mayabeque, told IPS in a telephone interview.

“Do we know how much water is used to produce a ton of a given agricultural or industrial product or to provide a specific service?” asked Bruzón, who believes that having such data would improve decision-making in a nation that must increasingly optimise and save water.