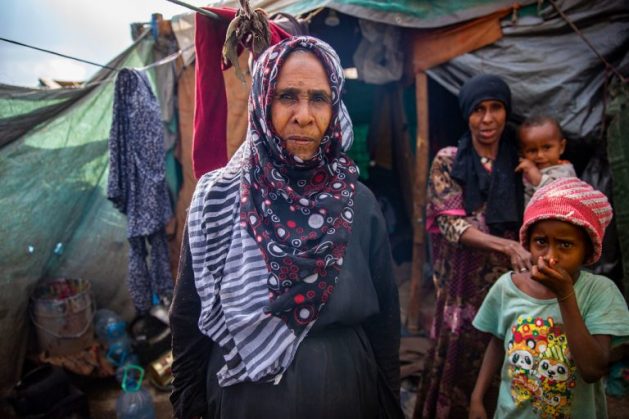 A displaced Yemeni woman stands outside a makeshift shelter that she shares with her extended family. U.S. Ambassador Linda Thomas-Greenfield said while the Biden administration is ‘stepping up its diplomacy’ to end the war, peace is impossible if the Houthis continue their relentless attacks against the Yemeni people and Yemen’s neighbours. (file photo) Courtesy: IOM/O. Headon

UNITED NATIONS, Mar 17 2021 (IPS) - The United Nations Special Envoy for Yemen has warned that the world’s worst humanitarian crisis, is rapidly deteriorating as Yemenis, including women and children, face hunger, injury and death.

Martin Griffiths told a UN Security Council briefing on Tuesday that one million internally displaced people are also at risk, amid escalating combat.

“Fighting forces on both sides have suffered heavy losses in this unnecessary battle. I see shocking reports, as I am sure we all do, of children increasingly getting drawn into the war effort and deprived of their future,” he said.

In 2011, Yemen became a hot spot in the Arab Spring, the surge of pro-democracy protests in the Middle East and parts of Northern Africa. The country’s president Ali Abdullah Saleh was forced to cede power to his deputy Abdrabbuh Mansour Hadi, after 3 decades of authoritarian rule. Hadi’s term in office was however tumultuous and by 2014 Yemen was locked in civil war. The crisis escalated the following year when insurgent Houthi forces seized the capital Sanaa and a number of western cities.

The UN said in December that the war had claimed almost a quarter-million lives. That figure included over 3,000 children.

Griffiths reminded the Security Council that both Yemenis and migrants are suffering. He called for an independent investigation into a massive blaze at an overcrowded detention center in the country’s capital last week. The fire killed 40 people and injured close to 200 others – mostly Ethiopian migrants. Human Rights Watch said the incident was caused by the Houthi’s ‘reckless use of weapons’.

The UN Envoy warned that incidents like the deadly fire represent just a fraction of the pain and suffering wrought by the protracted war. He told the council famine has arrived “to add to the tragedy of Yemen”.

“It is logical therefore and it has been incumbent upon the parties for a very long time, and now more than ever, to agree to stop the fighting and to silence the guns,” he said.

“A nationwide ceasefire, along with the opening Sana’a airport and ensuring the unhindered flow of fuel and other commodities into Yemen through Hudaydah ports, are urgent humanitarian imperatives.”

Meanwhile, the UN’s humanitarian chief Mark Lowcock said the world is ‘running out of time’ and failing to meet the financial goals needed to tackle the crisis. A donor conference held in March raised $1.7 billion for the cause, half of what is needed to stave off large-scale famine.

“I again call on everyone to do everything you can – including money for the aid operation – to stop the famine,” Lowcock said.

U.S. Ambassador Linda Thomas-Greenfield said while the Biden administration is ‘stepping up its diplomacy’ to end the war, peace is impossible if the Houthis continue their relentless attacks against the Yemeni people and Yemen’s neighbours.

“Unfortunately, Houthi attacks have continued unabated since December, when they attempted to assassinate the new Yemeni cabinet. And today, the Houthi offensive in Marib is taking the lives of more Yemeni men, women, and children. They are also cruelly detaining innocent people,” she said.

Describing the situation in Yemen as ‘hell on earth,’ the U.S. Ambassador said it is time for heightened commitment by all concerned nations, to contribute money and aid to Yemen.

“Millions of Yemeni people remain in dire need. For them, the words that we say here in the Council can only go so far. The important thing is that we act, and we act now, as we have heard from all of our speakers today,” she said.

“We all expressed to a number here on this screen our shock at the situation. We all called for an end to the violence, and we all declared our support for the Yemeni people. Let’s translate these statements into actions.”