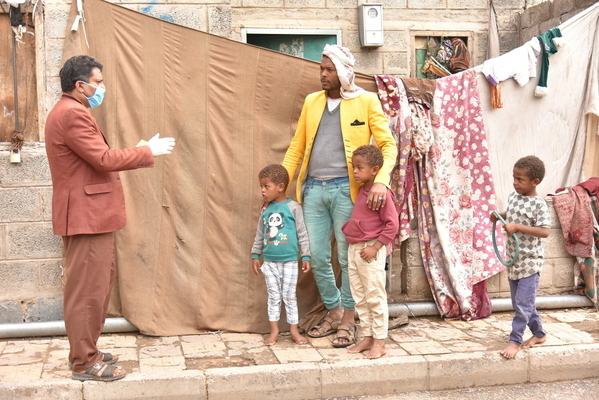 Volunteers teach people living in settlements about COVID-19. This photo was taken in Sana’a, Yemen. At a Security Council briefing yesterday UN Under Secretary-General for Humanitarian Affairs and Emergency Relief Coordinator said people in Yemen are more worried about hunger than the COVID-19 pandemic. Credit: Dhia Al-Adimi/UNICEF

UNITED NATIONS, Feb 19 2021 (IPS) - Yemen is heading towards the worst famine the world has seen in decades, the United Nations Security Council was warned in a briefing yesterday.

“Across Yemen, more than 16 million people are going hungry – including 5 million who are just one step away from famine,” Mark Lowcock, the UN Under Secretary-General for Humanitarian Affairs and Emergency Relief Coordinator, said during the briefing. The country has a population of just over 29 million.

Lowcock briefed the council about the worsening food insecurity and malnourishment of children in the country, among other issues. He pointed out four areas that need to be addressed immediately: protection of civilians, humanitarian access, funding for aid services, and establishing peace.

At the briefing, Lowcock highlighted the issue of hunger and child malnutrition in a country where people are more worried about hunger than the COVID-19 pandemic.

He pointed out that currently, severe malnourishment affects 400,00 children under the age of five in the country — most of whom have just a few weeks or months to live.

“These are the children with distended bellies, emaciated limbs and blank stares – they are starving to death,” Lowcock said.

Hunger and conflict are inextricably linked as they both breed off of each other: hunger leads to conflict, and conflict leads to hunger, Annabel Symington, spokesperson for the World Food Programme (WFP) in Yemen, told IPS.

“The alarming hunger levels in Yemen have been caused by six years of conflict and the almost near total economic collapse that has resulted in over half the population – 16 million people facing crisis level of food insecurity, and 50,000 people living in famine-like conditions,” Symington said, adding that the pandemic has been an exacerbating factor in an already deep conflict.

Lowcock also raised the issue of the recent attack on Marib city, the stronghold of the government, calling it an “extremely dangerous” escalation. “It threatens to send hundreds of thousands of people again running for their lives at a time when everyone should be doing everything possible to stop famine,” he said.

But Ibrahim Jalal from the Middle East Institute (MEI) says the UN should have delivered a stronger message and specifically named Yemen’s Houthi group who were responsible for offensive in Marib city.

“I think the first thing I expected is more clarity in language,” Jalal, a non-resident scholar at the MEI’s Gulf Affairs and Yemen Programme, told IPS after the briefing. “You see so many issues when they talk about protection of civilians, or humanitarian issues at stake or even the military escalation by Houthis in Marib — they were not named in any form of clarity.”

He criticised Lowcock’s discussion of the Marib attack as well as the SAFER tanker issue as ones without much nuance or critical questions. He said even though Lowcock brought up these issues, it remained “clearly unanswered” for many as to why these incidents took place and who needs to be held accountable in response.

Jalal believes Lowcock should have also specifically addressed the issue of  internally displaced peoples (IDP) camps, which have been hit particularly hard by the most recent attacks.

“The [IDPs] situation in Marib is quite alarming, so things should’ve been spelled just very clearly — language matters,” Jalal said. “I don’t see that there.”

Meanwhile Lowcock also pointed out the challenges in different parts of the country that are hampering aid.

In the south, there are administration challenges such as delays in signing project agreements or releasing equipment.

In the north, he said, Ansar Allah authorities are the ones causing delays in aid services reaching the people.

“[Ansar Allah] regularly attempts to interfere with aid delivery and they regularly harass aid agencies and staff,” he said. “This is unacceptable.”

Ansar Allah is also an obstacle for the UN’s ability to address the SAFER tanker issue, he said.

“Ansar Allah authorities recently announced plans to review their approval for the long-planned mission and advised the UN to pause some preparations,” he said. “They have now dropped this review. Unfortunately, we only heard that they dropped the review after a key deadline had passed to deploy the team in March.”

“I want to emphasise that the UN remains eager to help solve this problem,” Lowcock added. “We think it poses a clear and present danger to everybody across the country.”

But Jalal still felt that these were mere words that wouldn’t translate into actions.

“I don’t think it was bold,” he said regarding Lowcock’s statement. “It was just another UN statement that might not meet the urgency and the alarming threats over the two million IDPs in Marib, or even the catastrophic looming environmental disaster [brought] on by the SAFER tanker issue.”

Jalal said he is concerned that the SAFER tanker issue keeps being pushed behind in priority year after year.

“When you have a looming multi-faceted crisis, the first thing is you address it,” he said. “But without addressing it, you’re deliberately or inadvertently contributing to the escalation of the crisis and now it’s more alarming than ever.”

Meanwhile Symington at WFP expressed hope about the United States’ administration’s recent declaration about ending the war in Yemen.