The writer is the co-founder of Colombian specialty green coffee supplier Those Coffee People. 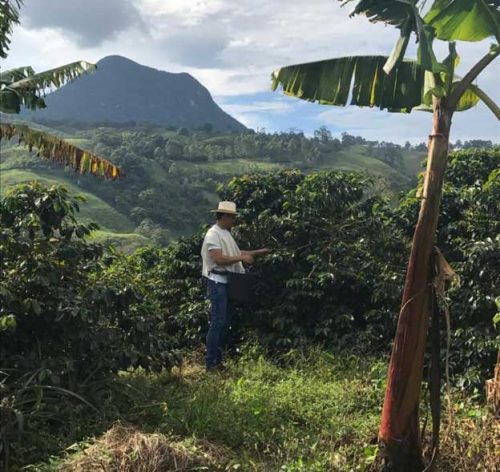 A day in the life of a coffee grower during harvest season. Credit: Those Coffee People

MEDELLIN, Colombia, Mar 26 2021 (IPS) - It’s been just over a year since the Colombian government launched its landmark price stabilization fund. With a budget of $64 million, the fund was designed to provide a hedge against low prices by subsidizing farmers during periods when prices dropped below production costs.

The reason for its introduction was due to the torrid times the nation’s producers had been through during the latter half of the last decade, where wholesale prices regularly dropped below the cost of production. So the fact the fund launched just as COVID-19 was beginning its stranglehold on the global economy was pure luck. But as luck goes, a government underwriting your industry just as the economy comes to a grinding halt is pretty fortunate.

However, far from the stabilization fund needing to be triggered almost as soon as it was launched, in order to mitigate the fallout of COVID-19 – the last 12 months have been a bumper year for Colombian coffee producers. The reasons for this are paradoxically partly due to COVID and partly due to other unforeseen circumstances.

Although Colombia is the world’s third-biggest coffee producer, production is extremely fragmented. The traditional family-owned smallholdings, known as fincas, have remained virtually intact since the birth of the industry. This has resulted in more than half a million privately owned coffee-producing fincas in the country, with approximately four million Colombians relying on these for their livelihoods.

Most of these fincas don’t produce enough to sell directly to buyers, so they instead sell their beans to the growers-union, the Federacion Nacional de Cafereros de Colombia (FNC). The FNC offer growers a floating internal buy-rate, determined by global wholesale prices, and then sell the produce on international markets.

The problem has been that the floating buy rate offered by the FNC dropped below the cost of production numerous times between 2016 and 2019, with prices falling to their lowest in nearly a decade in the 2018-19 harvest. This meant growers were selling at a loss, with many abandoning the industry altogether.

The Internal Buy Rate Since the Onset of the Pandemic

The FNC floating buy rate had been trending upwards since the middle of 2019 as price recovery took hold after the nadir of the 2018-19 harvest. However, as the below graph shows, the buy rate exploded in March 2020, just as the pandemic took hold, with the price increasing to COP 1,143,193 (USD $319), a 29% increase versus January 2020. And while the price has fluctuated since then, it’s remained extremely buoyant. 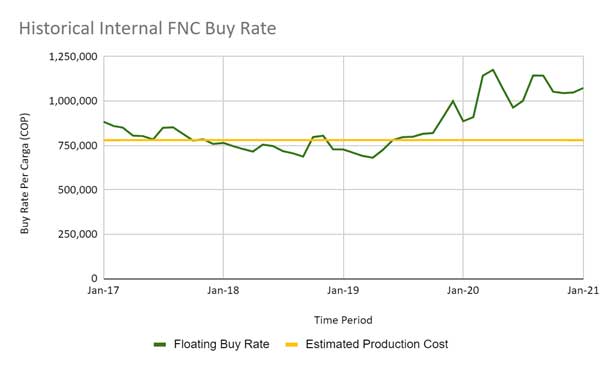 The price spike was partly due to the complete collapse in demand for oil in March 2020. With Colombia being an oil-producing nation, the Colombian peso suffered a near 20% drop in value versus the dollar. And with the FNC collecting payments from buyers in dollars, it was able to arbitrage this difference and pass on much of the increased value to growers.

To add to this, Colombia also gained an advantage against its nearby coffee-producing competitors, such as Brazil, which suffered from excessive rain and little solar light in the first trimester of 2020, meaning the country’s coffee harvest was badly affected. There were also fewer coffee exports from Central America due to low manual labor availability. All of these factors created a supply squeeze, both real and feared, which helped to sustain higher prices.

Colombia wasn’t completely spared some of the inclement weather suffered by its neighbors over the last 12 months. Delayed starts to the rainy seasons as well as the ever-present danger of the broca bettle made a bit of a dent in total production, being 4% down YoY. 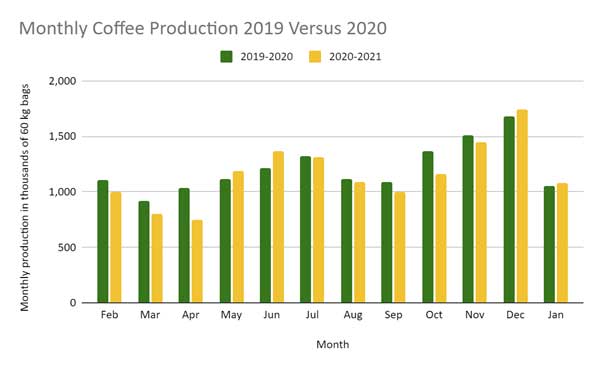 Within this context, the fact the value of coffee production grew by 25% YoY in 2020, in spite of the fact export volume fell by 8%, shows just how significant this price rally has been for the nation’s smallholders.

Despite the historically high FNC buy rate, this is no reason for producers to become complacent. A unique once-in-a-generation set of circumstances conspired to push prices up to new highs, and for the time being, at least, keep them there.

A worry is that this unexpected bonanza being enjoyed by growers could disincentivize many from making the switch to higher-value specialty crops, which is a key development objective of the FNC. Switching from commercial grade to specialty comes with plenty of risks, which are compounded during a pandemic. And all the while, the FNC is offering record prices for regular commercial-grade crops.

So while it’s impossible to predict when prices may fall to below production costs, recent history tells us we shouldn’t write this off at any point. Add to that the unpredictability of climate change and the longtail impact of COVID which will impact markets in ways not yet foreseen.

And when it comes to the growers themselves, there are still barriers to their economic security in rural areas of Colombia to take into account — such as a lack of connectivity and food insecurity — which mean that if the market situation changes in the near future, they have very little to fall back on, and the price stabilization fund will be needed. But with this novel mechanism remaining untested, its ability to provide a much-needed safety need remains unproven.

*Based in Medellin, Colombia, Jennifer Poole spends her time traveling to remote towns and villages in search of the best specialty coffee the country has to offer. She is an international economist with work experience in North America, South America, East Africa, Southeast Asia, Europe and the Middle East. She received her MBA from IDRAC Ecole Superieure de Commerce in Lyon, France and is heading Those Coffee People’s international business development.