Women Will Not Reach Parity at the Pinnacle of Power for Another 130 Years, Predicts UN

María Fernanda Espinosa Garcés was only the fourth woman in the 76-year history of the United Nations to be elected President of the General Assembly, the UN’s main deliberative and policy-making body. She was the Foreign Minister of Ecuador. She is being congratulated by the outgoing President Miroslav Lajčák, (centre) and the UN Secretary-General, Antonio Guterres. September 2018. Credit: UN / Loey Felipe

At the current rate, says a new report by UN Secretary-General Antonio Guterres, parity at the pinnacle of power will not be reached for another 130 years. (based on calculations of UN-Women data, as of 1 November 2020).

But this triggers the question: Does this also apply to the United Nations, which has never had a woman as Secretary-General, while only four women have been elected to lead the General Assembly– over a period of 76 years.?

Gendered perceptions that executive offices should be filled by men, and not on the basis of credentials, account for women’s severe underrepresentation at this level., according to the report which will go before the annual sessions of the Commission on the Status of Women (CSW), March 15-26.
https://undocs.org/E/CN.6/2021/3

The CSW, described as the principal global intergovernmental body, exclusively dedicated to the promotion of gender equality and the empowerment of women, is a functional Commission of the UN Economic and Social Council (ECOSOC).

Speaking on International Women’s Day March 8, Guterres singled out the progress made on gender parity under his administration.

“Overall, we in the United Nations are on a positive trajectory towards gender parity. Two decades after the General Assembly’s first deadline, we are finally making progress across the entire United Nations system. We achieved the goal of 50-50 gender parity amongst my Senior leadership, two years ahead of my commitment,” he said.

In the Secretariat, the proportion of women in the professional categories and above has increased to over 41 per cent from 37 per cent in 2017 – a steady annual increase. “This shows that our strategy works”.

In the Secretariat’s field operations, the gender balance is 31 percent women and 69 percent men.

Guterres also said: “We are taking steps to identify qualified women candidates to replace many of the 3,000 international staff who are retiring in the next eight years, the majority of whom are men. This includes measures to develop staff and build internal talent pipelines.” 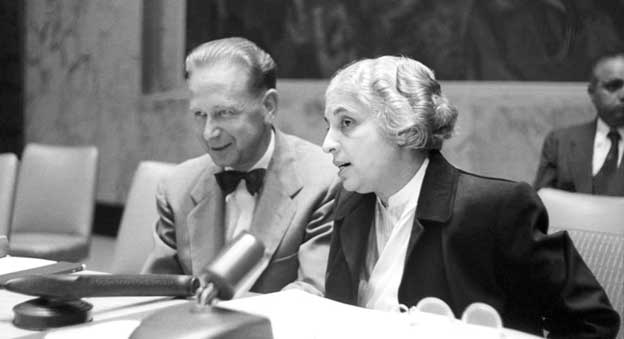 In 1953, India’s Vijaya Lakshmi Pandit, pictured at UN Headquarters alongside the then Secretary-General Dag Hammarskjöld, was elected as the 8th and first woman President. Credit: UN / Albert Fox

Gender equality is a question of power. “We live in a male-dominated world with a male-dominated culture and male-dominated power structures. This has inevitably affected the institutional culture of the United Nations, and of diplomacy as a whole”, he declared.

But does that male-dominated power structure reach out to the office of the UN Secretary-General?

Ian Richards, a former president of the UN staff coordinating committee, told IPS there have been varied reactions from UN staff to the Secretary-General’s gender parity policy, particularly when it comes to downsizing in peacekeeping operations.

“However, this year many staff have been asking us if the Secretary-General plans to apply the gender parity policy to his own position, which up to now has only been filled by men. We don’t know how to answer them on this as it is outside our mandate,” said Richards.

“The Secretary-General may wish to address this question directly,” he added.

Barbara Adams, chair of the board of Global Policy Forum, told IPS: “It’s a relief to see that the Secretary-General is no longer equating gender parity with gender equality. As we know overcoming structural or institutional discrimination of any and all kinds extends to measures beyond individual appointments.”

The recognition of importance and impact of power dynamics is welcome, but “taking” power in the present setup is a bit of a contradiction in terms, she argued.

Perhaps the quote of Simone de Beauvoir would be of interest, said Adams, a former Associate Director of the Quaker United Nations Office in New York (1981–1988).

Considered one of the most pre-eminent French existentialist philosophers and writers, Simone de Beauvoir, once famously remarked: “The point is not for women simply to take power out of men’s hands, since that wouldn’t change anything about the world. It’s a question precisely of destroying that notion of power”.