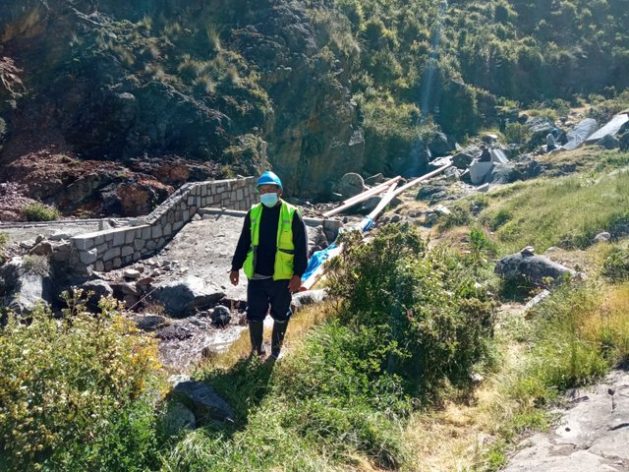 Alberto Pérez stands in one of the catchment areas to bring water to the amuna, the Quechua name for an ancient network of infiltration ditches, whose restoration has improved access to water in his village, San Pedro de Casta, while increasing the flow to the watersheds that supply the Peruvian capital. CREDIT: Courtesy of Alberto Pérez

LIMA, Jun 1 2021 (IPS) - In the highlands near the capital of Peru, more than 3,000 metres above sea level, ageold water recovery techniques are being used to improve access to water for 1,400 families, for household consumption and for crops and livestock.

This natural infrastructure project is located in the upper area of the town of San Pedro de Casta, some 90 km from Lima. With community participation, a network of ancient stone ditches called amunas in the native Quechua language is being restored there.

“We want to help the people who take care of the water sources to have greater water availability themselves,” Mariela Sánchez, executive director of Aquafondo, an initiative that promotes water security projects with nature-based solutions, told IPS in a video interview.

The non-governmental Aquafondo or Water Fund for Lima and El Callao (two neighbouring provinces) is part of the Latin American Water Funds Partnership, created in 2011 by the Inter-American Development Bank (IDB) and international environmental protection organisations.

Aquafondo’s public and private partners promote the recovery, conservation and protection of the water sources that supply Lima, home to 9.5 million people, where there is a latent risk of water stress due to the arid conditions, climate change and rising demand.

Sánchez, an economist by profession, explained that the amuna ditches will directly benefit the families of this Andes highlands area because they will have water during the dry season to irrigate their crops of potatoes, beans, avocados and other products that are part of their daily diet and to water the pasture used by their livestock.

“Now we are capturing more water in the rainy season, the infiltration is seeding water in the rocky areas and will feed our farms,” Alberto Pérez, a farmer and former community leader of San Pedro de Casta, told IPS by telephone from his village.

The 58-year-old communal farmer gets up every day before six in the morning to get ready for the hour and a half walk to the Chinchaycocha area at 3,500 metres above sea level. 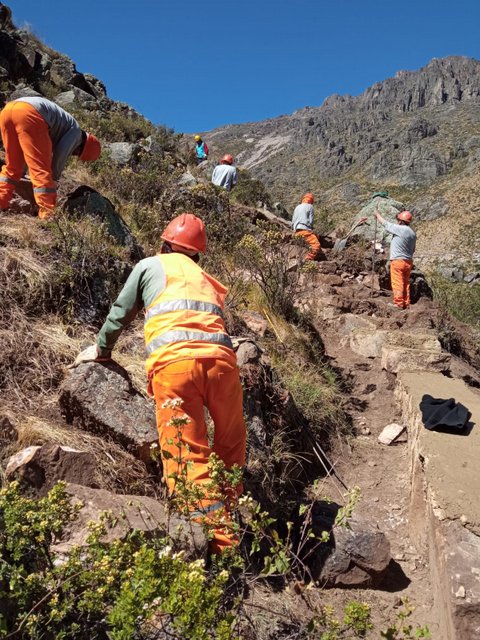 Women from San Pedro de Casta participate in the restoration of water infiltration channels, removing clay used in the process to recover water sources in the Andean highlands, some 90 kilometres from Lima, Peru. CREDIT: Courtesy of Alberto Pérez

The community takes care of the amuna ditches

He is one of the 100 villagers who, in four groups of 25, make the trek from Monday to Saturday to carry out the communal work of restoring the amuna channels – paid work that contributes to their household economy, while their families take over their share of the work caring for the crops and livestock.

“The amuna ditches date back to ancient times, they were used by the Incas for agriculture and now thanks to Aquafondo we are working to improve and widen them,” he said. “This year’s work will be finished in July and the channel will be activated with the next rains in October or November, to the joy of the entire community.”

Greater water availability has motivated them to expand their cultivation areas in order to increase production and have surpluses to take to market, as people are already thinking of doing in other towns and communities surrounding San Pedro de Casta, which includes the 1,400 families benefiting from the project, in the municipality of Huarochirí, department of Lima.

“Without water for irrigation, we could not think of planting more. Now we are planning to incorporate fruit trees such as apples and cherimoyas (Annona cherimola),” said Pérez enthusiastically.

In addition, the number of hours that piped water is available in the community’s homes has increased, which in the current times of the COVID-19 pandemic has allowed local residents to maintain hygiene habits to prevent infection, such as frequent hand washing. 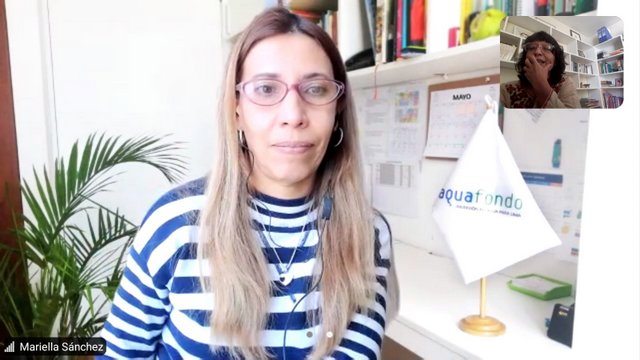 The restoration of infiltration channels such as the amunas, reforestation or construction of cochas (small reservoirs) are some of the natural infrastructure works also known as water planting and harvesting.

They were used in pre-Hispanic times and their usefulness is being reappraised in different regions of the country. In the case of Lima, this process began with the Aquafondo projects.

Demand in the capital is partly met by water from the basins of the Rímac, Chillón and Lurín rivers. Of these, the first is the largest source and the one that also shows the greatest environmental deterioration.

The technique of infiltration through the amuna ditches is presented as a sustainable alternative with minimal environmental impact.

The already operational Aquafondo projects have so far restored 17.7 km of channels that contribute more than four million cubic metres of water per year to the Rimac and Lurin river basins.

“All residents of Lima are indirect beneficiaries of this work; according to World Bank studies, 80 percent of the water that infiltrates is for the benefit of the community and 20 percent for the city, but these percentages vary over time,” explained Sánchez. 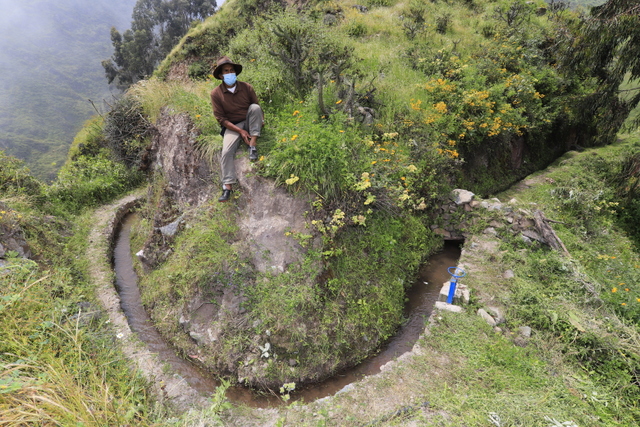 A villager in San Pedro de Casta, in the central highlands of Lima, more than 3,000 metres above sea level, is seen here in the area of the infiltration channels or amunas in the Quechua language, which they have been restoring to capture rainwater and provide water in the dry season. CREDIT: Aquafondo

This means that with more natural infrastructure projects in the basins, the percentage of water needed locally will decrease, so that in the next 10 years, 20 percent of the water would be expected to be used in the community and 80 percent in the city, as the smaller population in the highlands means they would benefit more quickly.

In the case of San Pedro de Casta, Sánchez emphasises that the relationship of trust built with the local population is key to sustaining the joint work.

“We execute the projects that they identify as necessary and participate in their implementation. Once the work is finished, they are in charge of monitoring the projects to ensure that they continue to function and to replace parts if anything deteriorates or breaks down,” she said, specifying that each project must involve 25 per cent women.

The gender quota means that in each of the four groups of 25 people who carry out the daily communal work on the amunas, there are eight women. Pérez highlighted this fact, saying it helped empower women and strengthen the role that they play, although he pointed out that they are not given the most physically demanding tasks.

“They look for the clay, remove the soil, clean the ditches and thus take part in the chain of work, but we don’t ask them to carry the stones, that work is too heavy, and that’s not discriminating,” he said. 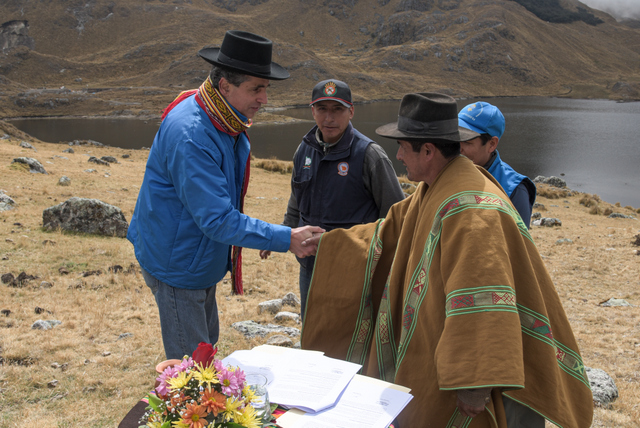 Ivan Lucich (left), executive president of the National Superintendency of Sanitation Services, participates in the signing of an agreement between the company EP Emusap and the rural communities of Micaela Bastidas and Atunpata, in the southern Andean municipality of Abancay, to implement the Mechanism of Remuneration for Ecosystem Services in the micro-watershed of Mariño, in Peru. CREDIT: Sunass

Water: governance is the key

In an initiative that began in 2007, the autonomous governmental National Superintendency of Sanitation Services (Sunass) has contributed to the conservation of water sources. Based on its role as a regulatory agency, in 2015 it created a tool for the implementation of the Law on Mechanisms of Remuneration for Ecosystem Services (Merse) to ensure a sustainable secure water supply.

The regulation establishes that water utilities must earmark one percent of the tariff to pay for ecosystem services in watersheds, thus generating a change in investment plans and promoting natural infrastructure projects.

The principle is that water users pay back, as part of their water bills, the people in the highland areas who help maintain water sources.

Iván Lucich, executive president of Sunass, explained to IPS in a video interview that while there has been progress in implementing the Merse in several regions of the country, the situation is different in the capital.

Sedapal, the public company in charge of the water supply in Lima, has not used the funds put aside for conservation since 2015 because it was looking for ways to organise itself internally to do so and because “they saw green infrastructure as unrelated to the work of a water company,” he said.

“The problem is that we didn’t understand that water is more of a governance problem than a resource problem, and that’s serious,” he asserted. But he believes that visits by Sedapal officials to the headwaters of the basins to learn about the experiences of local residents in the maintenance and conservation of water sources will help them understand the value of these initiatives.

Lucich is convinced that good community relations with the population contribute to the protection of ecosystems. He added that the prospect of being able to solve problems together in relation to drinking water and sanitation also strengthens relations.

Sedapal has 26.3 million dollars in its ecosystem services compensation reserve, and with the support of Aquafondo has already identified 15 projects that should be implemented in the coming months, following the required evaluation.

These projects must incorporate a gender perspective in their design and implementation. “Otherwise, from Sunass’ perspective, they could not be approved,” Lucich said.

He said the social dynamics in the different communities where they have worked generated very particular processes of grassroots involvement by women and their social organisations.

He gave the example of the question that was raised of who takes care of the children when women are working on the ditches, and said that in the face of this need it is up to the organised community to provide a solution and to make sure it becomes a shared responsibility.