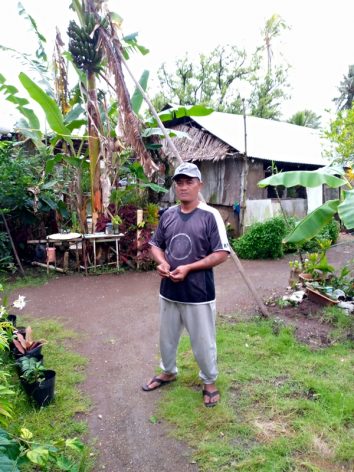 Robby Nena's small house, made of concrete and tin roof, is built on reclaimed land at the edge of the Finkol river, about 200 meters from the Pacific Ocean within the Utwe Biosphere Reserve Transition Zone in the Federated States of Micronesia (FSM). Climate change impact means that his home is frequently inundated with saltwater during high tide. Courtesy: Kosrae Conservation & Safety Organisation (KCSO)

SYDNEY, Australia, Jun 28 2021 (IPS) - Robby Nena is one of the many farmers and fishermen on the frontline of climate change in the Federated States of Micronesia (FSM), where coastal flooding and erosion, variable and heavy rainfall, increased temperature, droughts and other extreme weather events are becoming all too common.

FSM is one of the 22 Pacific Island Countries and Territories (PICTs). These nations contribute less than 0.03 percent of the world’s total CO2 and other greenhouse gas (GHG) emissions. Yet, they are amongst the most vulnerable to the impacts of global warming, climate change and sea level rise. A quarter of Pacific people live within 1 km of the coast.

“Every time it rains, our home and farm get flooded, destroying our crops, damaging infrastructure and posing a major health hazard. Our tapioca and taro crops were completely destroyed in the major flooding event last month,” Nena tells IPS from Utwe village in FSM’s Kosrae state via a choppy Messenger call.

His small house, made of concrete and tin roof, is built on reclaimed land at the edge of the Finkol river, about 200 meters from the Pacific Ocean within the Utwe Biosphere Reserve Transition Zone.

“The river and ocean meet here so we also get frequently inundated with saltwater during high tide,” says Nena, who lives with his mother, teacher wife and two children.

The already evident and worsening impacts of climate change on food security and livelihoods in PICTs are being exacerbated by lack of timely access to climate finance for mitigation and adaptation, say climate advocates.

The Green Climate Fund (GCF), part of the financial mechanism of the UN Framework Convention on Climate Change (UNFCCC), is currently the world’s largest dedicated multilateral climate fund and the main multilateral financing mechanism to support developing countries in achieving a reduction of their GHG emissions and boost their ability to respond to climate change.

Belinda Hadley, Team Leader of FSM’s National Designated Authority (NDA) for the GCF, says that currently FSM doesn’t have the technical, financial and human capacity to access climate finance for mitigation, adaptation and resilience projects, which are much needed for the growing climate change challenges.

“It is difficult to make our proposals bankable because of all the requirements. English is the language for climate finance applications, and to most people in FSM, articulating needs, challenges and activities into proposals is no easy feat as various islands have their own distinct indigenous languages,” Hadley tells IPS.

GCF proposals, in order to be successful, need a strong and robust explanation of the climate impacts and risks to be addressed. The climate rationale description, as requested in the GCF proposal template, requires access to sound climate science and data.

“This requirement of separate data for climate change makes it difficult for us. We have climate change and development data consolidated and integrated into one because of our small population and dispersed geography,” says Hadley.

FSM comprises of more than 600 islands spread across the four states of Kosrae, Yap, Chuuk and Pohnpei. This geographical spread makes disaster preparedness and response a challenge and financially costly.

The pandemic has added another layer to the hard realities of climate change for the people of FSM.

“We were working on accessing climate financing to begin our adaptation efforts and move forward with our national adaptation plan, but we have not been able to conduct state consultations and meet stakeholders. All attention and resources have been focused on COVID-19 preparedness measures. Everything else has been pushed to the backburner,” Hadley tells IPS.

GCF operates through a network of accredited Direct Access Entities (DAE) and delivery partners, who work directly with developing countries for project design and implementation. 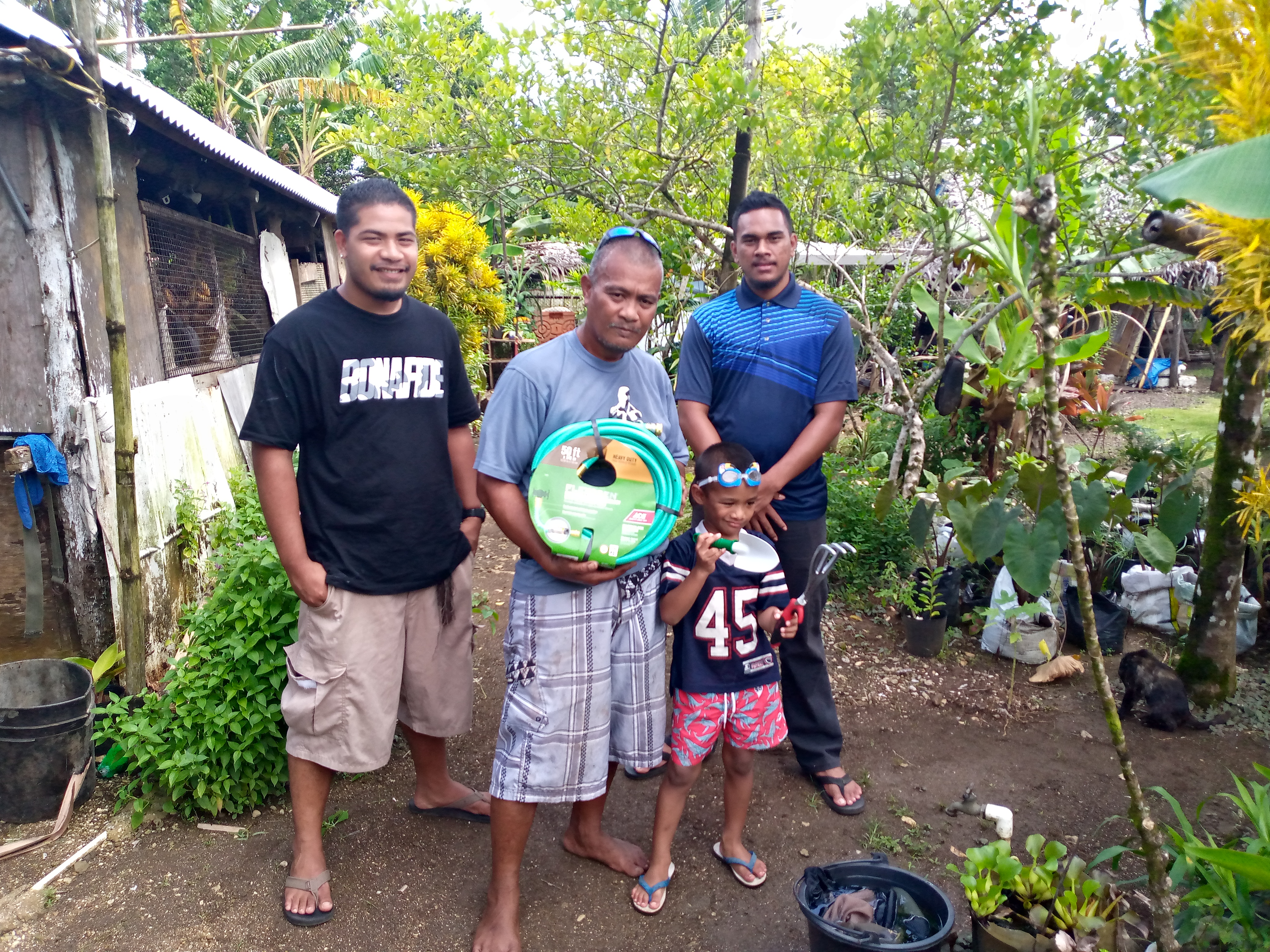 Robby Nena (centre) farms and fishes for subsistence. Fish are a mainstay of food security in most Pacific Island Countries and Territories and subsistence fishing still provides the majority of dietary animal protein in the region. Courtesy: Kosrae Conservation & Safety Organisation (KCSO)

The Pacific Community (SPC), which supports PICTs with overall coordination and capacity building for their engagement with climate finance mechanisms such as the GCF, is the delivery partner for FSM’s NDA. It supported the Micronesia Conservation Trust (MCT) to become an accredited DAE and to develop FSM’s first full-sized GCF project on food security, which was approved for funding in March 2021.

MCT’s Deputy Executive Director Lisa Ranahan Andon tells IPS, “This very first GCF grant to the FSM is going to the people who most need this intervention – and those are the most vulnerable farmers and fishers.”

“We are confident that our approach, integrating disparate one-off projects into a cohesive national approach, will increase the positive impacts on communities. We are in the process of fulfilling the pre-disbursement requirements and anticipate a first disbursement and project initiation in January 2022,” she adds.

Andon feels that this first award should help pave the way for other PICTs and national DAE in the region to secure GCF financing.

FSM accounts for only 0.003 percent of global CO2 and other GHG emissions, yet it has set an ambitious target of 35 percent emission reduction by 2025.

Besides the GCF, the country has been receiving some climate financing from the Adaptation Fund, European Union, Global Environment Facility, World Bank, Asian Development Bank and others, mainly for food and water security, renewable energy, coastal protection and disaster risk reduction.

Kosrae Conservation & Safety Organisation (KCSO), a small non-profit organisation supports and implements climate adaptation and mitigation projects in the local communities of Kosrae through climate finance from amongst others, the MCT. Under one of its 2018 grants, they controlled and collected Crown of Thorns Starfish (COTS), which is an invasive species that destroys coral in FSM, to experiment the use of COTS as a green fertiliser.

“The farmers we distributed it to all claim that the COTS were a good natural fertiliser. We repeated the COTS collection this year and supplied it to four farmers in different villages. Nena is one of them. Three of the four farmers are seeing very good results,” KCSO’s Executive Director Andy George tells IPS.

“If these farmers planted 50 plants and they can eat off it, then that is a success for us. Apart from helping them become self-sufficient in meeting their subsistence requirements, we also educate them towards climate adaptation and mitigation,” he adds.

A lot of farmers like Nena only do farming and fishing for subsistence. Local produce includes eggplant, sweet potato, taro, banana, sugarcane, coconut and citrus plants. Fish are a mainstay of food security in most PICTs and subsistence fishing still provides the majority of dietary animal protein in the region.

While PICTs have small populations and land mass, SPC’s Deputy Director General in Noumea (New Caledonia), Cameron Diver tells IPS, “They are the custodians of significant resources such as tuna stocks, which countries around the globe rely on for food security. If these nations cannot access the level of climate finance required to address climate change impacts on these resources, then this could threaten food security for global populations well beyond the region.”