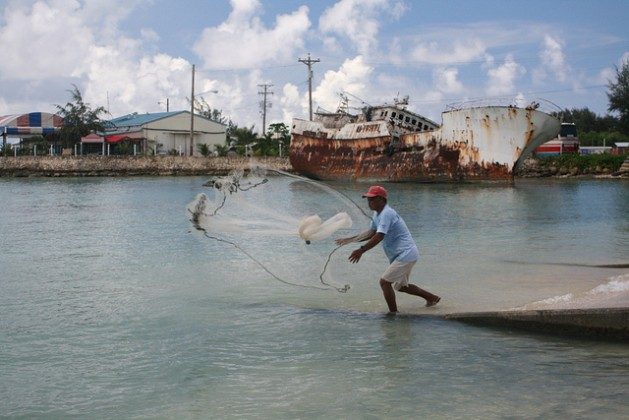 More than 200 million people depend in some way on small-scale fisheries. Ending harmful fishery subsidies would give industrially overfished stocks an opportunity to bounce back. Credit: Christopher Pala/IPS

BUENOS AIRES, Aug 2 2021 (IPS) - After more than 20 years of negotiations, the World Trade Organization (WTO) has moved a step closer to an agreement on ending harmful fishing subsidies. The deal would set new rules for the global fishing industry and limit government funding that contributes to unsustainable fishing and the depletion of global fish stocks.

In a meeting with government ministers and heads of national delegations, WTO members vowed to finish the negotiations before the WTO’s Twelfth Ministerial Conference (MC12) in late November, and to empower their delegations in Geneva to do so. Members also said the negotiating text currently on the table can be used as the basis to strike a final agreement.

Eliminating all harmful subsidies could help fish populations recover. Specifically, it would result in an increase of 12.5% in global fish biomass by 2050, which translates into nearly 35 million metric tonnes of fish – almost three times Africa’s entire fish consumption in a single year

“It’s been a successful day,” WTO chief Ngozi Okonjo-Iweala told reporters at the close of the meeting. “In 20 years of negotiations, this is the closest we have ever come towards reaching an outcome – a high-quality outcome that would contribute to building a sustainable blue economy. I feel new hope.”

The talks’ chair, Santiago Wills, was also upbeat: “I believe that the answers today have given us the ingredients to reach a successful conclusion. Members now want to move to text-based negotiations. Twenty years has been long enough. If we continue [negotiating] for another 20 years, there won’t be any fish left.”

Negotiators at the WTO had been tasked with eliminating subsidies for illegal, unreported and unregulated (IUU) fishing and prohibiting certain subsidies that contribute to overcapacity and overfishing. Talks have been going on since 2001 but differences between governments have hindered progress.

2020 had been set as a deadline to strike an agreement, but talks were delayed due to Covid-19 restrictions and the US presidential elections. A deadline was then set for this July, which was again missed. Now, Okonjo-Iweala, appointed as head of the WTO in March, aims to reach an agreement by year-end in what will be a key test for the organisation’s credibility, with members deadlocked on other fronts.

“In international negotiations of this type only two things are relevant. The nitty-gritty to make sure everybody is on the same page, and the spirit that prevails. If Ngozi and Wills reflected correctly what happened in the meeting, we can say there’s cautious optimism over an agreement,” Remi Parmentier, director of environmental consultancy The Varda Group, told China Dialogue Ocean.

At the meeting, ministers discussed an eight-page draft agreement, which lists a range of subsidy bans and some conditions for exemptions for poorer countries, all of which are yet to be finalised. While some delegations like the EU were positive, several ministers expressed reservations over the content of the text.

“Clearly, it will lead to capacity constraints for developing countries, while advanced nations will continue to grant subsidies,” Indian trade minister Piyush Goyal said at the meeting, regarding one part of the text. Pakistan described the draft as “regressive and unbalanced,” while the African coalition said “significant gaps” remain.

Countries’ differences were acknowledged by Ngozi and Wills at the meeting. Nevertheless, they remain optimistic and said the issues would be resolved once countries move into text-based negotiations. The agreement on fishing subsidies will require a consensus among all member states, according to WTO rules.

The draft deal essentially proposes three categories of prohibited subsidies; those that support IUU fishing, affect overfished stocks, or lead to overcapacity and overfishing. While this may sound simple, the political, economic and cultural complexities represent real challenges.

Many of the major fishing nations are considered developing countries by the WTO, including China, which has one of the world’s biggest fishing fleets. China’s minister of commerce, Wang Wentao, expressed China’s “support for the conclusion of [fishing subsidies] negotiations before the end of MC12.” Speaking at the meeting on 15 July, Wang stressed that concluding the negotiations would represent a major contribution from the WTO to the United Nations’ 2030 Sustainable Development Goals. “As a developing country and a major fishing power, China will take on obligations commensurate with our level of development”.

At the meeting, Wang also introduced China’s emphasis on green development in future policies on fishing subsidies and its “zero-tolerance” policy towards IUU.

Isabel Jarrett, manager of The Pew Charitable Trusts’ project to end harmful fisheries subsidies, told China Dialogue Ocean that an agreement “with too many loopholes” would undermine the WTO’s sustainability goals. The final text has to ensure that governments aren’t allowed to subsidise “irresponsible practices that can hurt fish populations,” she added.

The scale of the problem

Subsidies paid to the global fishing industry amount to around US$35 billion per year (228 billion yuan). Of this, $20 billion is given in forms that enhance the capacity of large fishing fleets, such as fuel subsidies and tax exemption programmes, according to the European Parliament’s Committee on Fisheries.

In 2018, the world’s top 10 providers of harmful fisheries subsidies gave out $15.4 billion in total, according to a report by Oceana. The EU, as a bloc, provided $2 billion, ranking third behind China and Japan.

Research by Pew has found that eliminating all harmful subsidies could help fish populations recover. Specifically, it would result in an increase of 12.5% in global fish biomass by 2050, which translates into nearly 35 million metric tonnes of fish – almost three times Africa’s entire fish consumption in a single year.

The need for progress on an agreement has gained new urgency during the last few years, as the world’s fish populations have continued to fall below sustainable levels. Around 60% of assessed stocks are fully exploited and 30% are overexploited, according to the latest figures from the UN Food and Agriculture Organization.

The termination of harmful subsidies, which is embedded in the UN Sustainable Development Goals (SDGs), would be seen as key progress on ocean sustainability ahead of this year’s UN biodiversity conference in Kunming, scheduled for October, and the COP26 climate summit in Glasgow in November.

“This is the year that the agreement has to be delivered. The WTO chief has made positive pronouncements of an agreement this year. There’s light at the end of this 20-year tunnel. The alternative of being in the tunnel shadows is a depressing prospect at the time ocean life is declining,” Peter Thomson, UN special envoy for the ocean, said in a recent webinar.