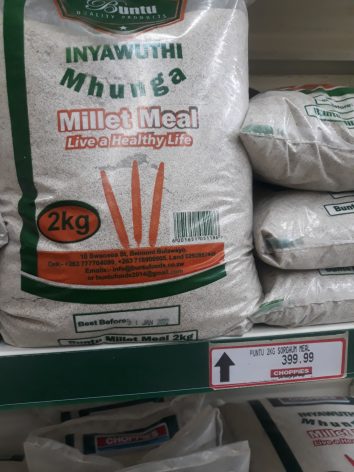 Supermarkets stock both millet and sorghum products, but these are often ignored. Now research has shown the crops have health benefits and are climate resilient. Credit: Ignatius Banda/IPS

Bulawayo, ZIMBABWE , Dec 1 2021 (IPS) - Millet could be Africa’s silver bullet for combating anaemia – and apart from health benefits, it is climate-resilient.

Iron deficiency affects more than 1.7 billion people globally, according to the World Health Organization. Undernutrition among children has led to stunted growth and anaemia, says the WHO. The ICRISAT study authored in collaboration with other research organisations notes that governments need to bring “millets into the mainstream” if iron deficiency is adequately addressed globally.

“Although the amount of iron provided depends on the millet variety and its form of processing, the research clearly shows that millets can play a promising role in preventing and reducing high levels of iron deficiency anaemia,” said Anitha Seetha, the study’s lead author and ICRISAT senior nutritionist.

The grain has another significant benefit – and could assist developing countries bearing the brunt of climate uncertainty and devastating drought cycles. The grain is climate-resilient and could help communities saddled with health emergencies as a result of drought. The study’s findings suggest interventions that could ease pressure on already burdened public health services.

“Now that there is strong evidence of the value of millets in reducing or preventing iron deficiency anaemia, it is recommended that one major research study be undertaken on anaemia covering all the different types of millet, common varieties and all major forms of processing and cooking,” says Professor Ian Givens, a co-author of the study and Director at University of Reading’s Institute of Food, Nutrition and Health (IFNH) in the UK.

“This will provide the detail required for designing interventions needed to have a major impact on reducing anaemia globally,” he said.

For countries like Zimbabwe, where small grains have long been touted as the answer to food insecurity and nutrition concerns, the ICRISAT study’s findings could influence smallholders, such as Samukele Jamela. She farms in the arid region of Filabusi, about 120km southeast of Bulawayo.

Jamela is one of many farmers who have routinely faced empty silos because of poor rains but still insists on planting rain-fed maize (corn).

“We plant maize here. That’s what we have always done. Very few people want to eat millet or sorghum. Even the children don’t like it,” she said, explaining why her community shuns growing small grains.

The country’s agriculture ministry is aware of this sentiment.

In 2010, Zimbabwe partnered with the Food and Agriculture Organisation to promote the production, processing and marketing of small grains such as millet and sorghum, and a decade later, agriculture officials are still trying to convince smallholders to grow climate-resilient small grains.

The United Nations Development Programme (UNDP) noted in a 2018 report titled “Barrier analysis of small grains value chain in Zimbabwe” that the country has experienced a decline in the production of small grains since the 1990s, with maize remaining the favoured crop despite successive crop failure due to poor rains.

As part of efforts to assist the country in turning the food insecurity curve, the International Fund for Agricultural Development (IFAD) announced a USD67 million investment programme aimed at Zimbabwe’s smallholder farmers this November.

“Depending on the geographical area, crops such as millet in drier areas will be supported,” Jaan Keitaanranta, IFAD Eswatini and Zimbabwe country director, told IPS.

The support came just as the UN agency warned last month that African countries would see a drop in the yields of staple crops such as maize owing to rising temperatures brought by climate change.

Titled What Can Smallholder Farmers Grow in a Warmer World? the report appeals to African countries to reduce their reliance on maize in favour of small grains, noting that by 2050, maize production could drop by 77 percent in some countries bearing the brunt of climate change.

“Millets are not only healthy but target some of our biggest needs, making them a powerful solution for our diets,” said Joanna Kane-Potaka, a former ICRISAT Assistant Director-General. She is a co-author of the study and now serves as Executive Director of the Smart Food initiative.

However, local researchers say the labour-intensive nature of small grains is one of many reasons why smallholders continue shunning sorghum and millet.

Phiri, who has led research on why smallholders in Zimbabwe’s arid regions shun small grains, said reasons included lack of knowledge of millet which “during weeding time, weeds tend to look exactly like the plant,” while consumer preferences have always favoured maize.

Among other recommendations, Phiri says the government has to shift its policy that has for years promoted maize as a cash crop, sidelining small grains.

“The need for a solution is critical, and therefore bringing millets into mainstream and government programs is highly recommended,” said Jacqueline Hughes, ICRISAT Director-General.