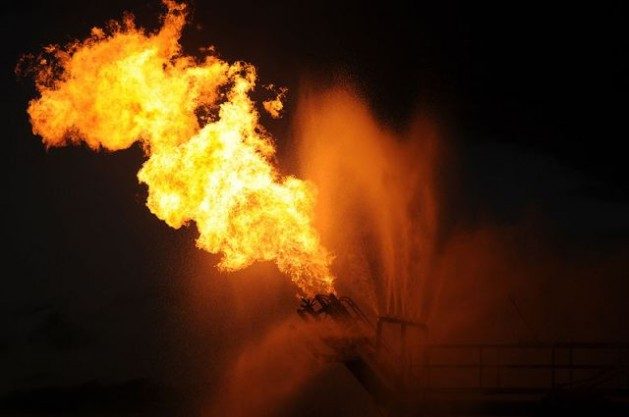 Global gas flaring increased to 144 billion cubic metres (bcm) in 2021 from 142 bcm in 2020. It is estimated that each cubic metre of associated gas flared results in about 2.8 kilograms of CO2-equivalent emissions. Credit: public domain

MADRID, May 18 2022 (IPS) - While the attention of mostly Western media and politicians is quasi exclusively hoarded up by the proxy war in Ukraine and its consequences on the energy sector, the world’s big oil business continues to burn Planet Earth with its underreported though highly polluting, wasteful practice of gas flaring.

This is anything but a minor issue: in fact, as much as 144 billion cubic metres of gas was flared at upstream oil and gas facilities in just one year-2021. Such an amount caused the emission of 400 million tons of carbon dioxide (CO2) equivalent, according to the World Bank.

Ten countries account for three-quarters of gas flaring. Out of these ten, seven oil producing countries –Russia, Iraq, Iran, the United States, Venezuela, Algeria, and Nigeria — have remained the top seven consistently over the last ten years, according to a World Bank report

Flaring is “a monumental waste of a valuable natural resource” that should either be used for productive purposes, such as generating power, or conserved.

For instance, the amount of gas that is currently flared each year – about 144 billion cubic metres – could power the whole of sub-Saharan Africa, the World Bank explains.

… And to generate 65% of Europe’s domestic power

But, what is gas flaring?

Gas flaring is the burning of natural gas associated with oil extraction. The practice has persisted from the beginning of oil production over 160 years ago and takes place due to a range of issues, from market and economic constraints, to a lack of appropriate regulation and political will, explains the World Bank.

“Gas flaring contributes to climate change and impacts the environment through emission of CO2, black carbon and other pollutants. It is estimated that each cubic metre of associated gas flared results in about 2.8 kilograms of CO2-equivalent emissions.”

In its May 2022 report, the World Bank also specifies that just ten countries account for three-quarters of gas flaring.

Out of these ten, seven oil producing countries –Russia, Iraq, Iran, the United States, Venezuela, Algeria, and Nigeria — have remained the top seven consistently over the last ten years.

Ending flaring and methane emissions is key to the energy transition, nevertheless the global progress to reduce it has stalled over the last decade, further underscoring the urgency to accelerate the decarbonisation of the world’s economies.

In spite of the scientifically evidenced fact that oil, gas and carbon industry is one of the major contributors to global warming, politicians continue to subsidise the fossil fuels business with shocking amounts of taxpayers money.

In fact, in a 2021 study: Still Not Getting Energy Prices Right: A Global and Country Update of Fossil Fuel Subsidies, the International Monetary Fund (IMF) reports that globally, fossil fuel subsidies were 5.9 trillion US dollars in 2020 or about 6.8 percent of Gross Domestic Product (GDP). And that such subsidies are expected to rise to 7.4 percent of GDP in 2025.

In the case of the United States, the government provides a heavy public subsidy to petroleum companies, with major tax breaks at virtually every stage of oil exploration and extraction, including the costs of oil field leases and drilling equipment.

The profit-making fossil fuels sector appears not to care about the real dangers of growing climate emergencies.

Such emergencies are already here. For instance, there is a 50:50 chance of the annual average global temperature temporarily reaching 1.5 °C above the pre-industrial level for at least one of the next five years – and the likelihood is increasing with time, according to a new climate update issued by the World Meteorological Organization (WMO).

There is a 93% likelihood of at least one year between 2022-2026 becoming the warmest on record and dislodging 2016 from the top ranking.

The chance of the five-year average for 2022-2026 being higher than the last five years (2017-2021) is also 93%, according to the Global Annual to Decadal Climate Update, produced by the United Kingdom’s Met Office, the WMO lead centre for such predictions.

Not just a random statistic

“This study shows – with a high level of scientific skill – that we are getting measurably closer to temporarily reaching the lower target of the Paris Agreement on Climate Change. The 1.5°C figure is not some random statistic.

“It is rather an indicator of the point at which climate impacts will become increasingly harmful for people and indeed the entire planet,” said WMO Secretary-General Prof. Petteri Taalas.

The 2015 Paris Agreement sets long-term goals to guide all nations to substantially reduce global greenhouse gas emissions to limit the global temperature increase in this century to 2 °C while pursuing efforts to limit the increase even further to 1.5 °C.