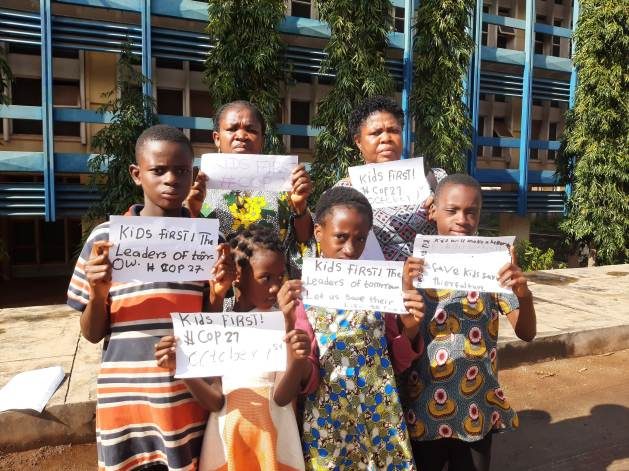 ROME, Nov 15 2022 (IPS) - Lea is a three-year-old from Mexico who loves ladybirds. Siddhiksha, a six-year-old from India, has a passion for trees and wild animals. Rachelle is a 12-year-old Tanzanian who is wise beyond her years. They are smart and adorable and they are among the stars of a short film that is aiming to remind the leaders taking part in the COP27 UN Climate Conference that they have a duty of care towards young and future generations.

“My biggest anguish is literally not knowing what the world is going to be like,” says Cora, 13, from Brazil, in the film.

“I’m afraid the world could suck, with a lot of species not being able to survive 50 years from now”.

Meera, a 15-year-old from Chennai, India, says she sees the effects of the climate crisis every day.

“Lately, I’ve noticed that it’s very hot in Chennai and there are many unseasonal floods in Bangalore.

Parents for Future Global’s demands for COP27 are that nations must agree to no new coal, oil and gas projects and to stop subsidising existing fossil-fuel projects and that they pledge to start paying for loss and damage

“There are forest fires all over the world almost every day.

“This is actually becoming scary and serious”.

The video was produced by the Our Kids’ Climate and Parents For Future Global networks to send the message that it’s time to put ‘Kids First’ and deliver real climate action.

“The aim was to create a film that the kids could identify with, using a kids’ perspectives, making kids feel empowered and recognised,” Sandra Freij, the photographer and filmmaker who directed and produced the short, told IPS.
“We wanted to put kids’ voices before the decision-makers at COP because their voices need to be heard and they have so much to say”.

Children from 16 different countries feature in the film, speaking about their dreams and fears for the future.
Freij had the tough task of selecting them from contributions from almost 100 children sent in by parents from all over the world.

“I never imagined we’d receive messages of such a grown-up nature.

“It was an emotional few months receiving message after message from kids that have connected the dots and who experience grief and fear about what the future holds”.

Our Kids’ Climate and Parents For Future Global are among several groups of people who are channelling their concerns about the impact the climate crisis will have on their children into action to bring about positive change.

Other groups include India’s Warrior Moms, who focus on the need to fight air pollution, and Britain’s Mothers Rise Up.

The latter group hit the headlines in June when they staged a spectacular song-and-dance protest outside the headquarters of Lloyd’s of London, inspired by the Let’s Go Fly a Kite scene in Mary Poppins, to tell the insurance giant to stop underwriting the fossil-fuel projects that endanger our children’s future.

Parents For Future is a network of independent national groups from countries both in the Global South and North.
The national and local groups take action that is most fitting to their contexts.

Parents for Future Italia, for example, prepared an ‘eco-manifesto’ outlining the policies the country needs to adopt to deliver climate action ahead of Italy’s general election in September.

Then these groups join forces at the global level.

Among other things, Parents for Future Global has been working hard to support the campaign for a Fossil Fuel Non-Proliferation Treaty. What makes this cooperation between different national groups possible is the recognition by all involved that you cannot solve the climate crisis unless you tackle the injustices that cause it.

And that means the countries of the Global North owning up to being largely to blame and taking action to remedy that via, among other things, loss-and-damage compensation.

Parents for Future Global’s demands for COP27 are that nations must agree to no new coal, oil and gas projects and to stop subsidising existing fossil-fuel projects and that they pledge to start paying for loss and damage.

The actions of these determined parents have not gone unnoticed.

“World leaders better watch out,” Dr Maria Neira of the World Health Organization said at the launch of the #KidsFirst film at COP27. “There is nothing worse or better than a mom fighting for the health of her children. “Now I have a lot of hope. This battle will be the one that we are going to win.”