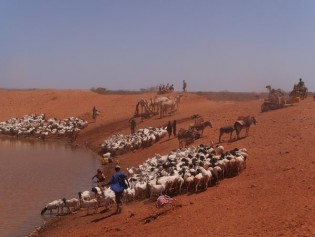 By William Lloyd-George
Despite speculation that the first anti-government protest in eight years, which was held this week in Ethiopia's capital, Addis Ababa, might signal new levels of political tolerance by the government, leaders of the political party that organised the protest say this cannot be further from the truth.

By William Lloyd-George
Several Ethiopian publications are coming together to set up a 'press council' with the hope of easing restrictions on the media in Ethiopia.

By William Lloyd-George
A rebel coalition in Sudan has declared war on the government less than a week after it attacked Sudanese forces. “Now there is a fully-fledged war in the new south of the north,” Yasir Arman, a leader of one of the armed groups in the alliance, told IPS, adding that the rebels now control a southern stretch of the country.

By William Lloyd-George
Many were hoping that recent peace talks between the Ethiopian government and Ogaden rebels would signal an end to the gruelling 18-year-old conflict. The latest round of talks, however, dashed all dreams of peace between the two sides.

By William Lloyd-George
Increasing numbers of Malian women are being raped by Tuareg rebels and armed groups that have swept across the north of Mali since the beginning of year, expelling all government troops from the region.

By William Lloyd-George
Sitting outside her small shop, high in the mountains in the Tacueyó indigenous reserve in southwest Colombia, Liliana Alarco tries to hold back tears as she recalls the day her young son was injured.
ADVERTISEMENT ADVERTISEMENT