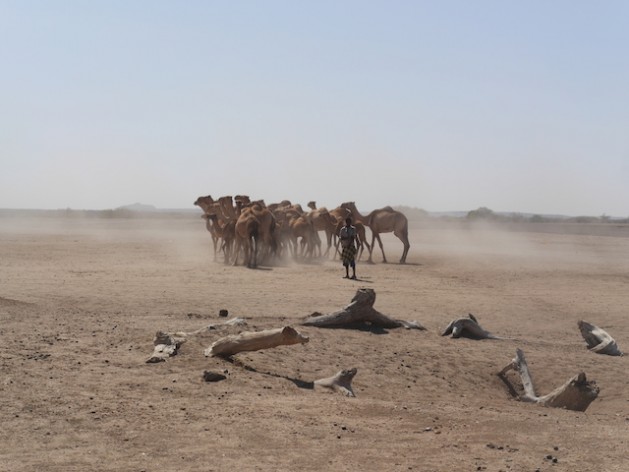 SOMALI REGION, Ethiopia, Jun 30 2014 (IPS) - When he was a young boy, 20-year-old Abdi, who comes from a small pastoralist community in Ethiopia’s Somali Region, “knew about school, reading and writing but did not expect this is something we would ever get close to.”

Abdi couldn’t attend school because he comes from a nomadic people, who are constantly moving from place to place.

His small pastoralist community has temporarily set up camp here, outside the town of Shilabo close to the Ethiopian-Somali border. It lies 425 kilometres away from the bustling activity of Jijga, the capital of Ethiopia’s Somali Region.

As the sun rises over the arid landscape, women in brightly-coloured traditional clothes light up the small villages, men in Somali sarongs pull lines of camels up the road, and the smell of stoves being heated for early breakfast blows through the hot air.

A few years before, the journey to get here would have been a bumpy and dusty one and would have taken days but the new road makes it easier to reach this once cut-off destination. This will be complimented soon by the opening of the Kebri Dahar international airport, built by the regional government.

An elder leads us through the community’s settlement. Each family has a few small domes constructed with twigs and cloth secured with small fences made out of bush branches. It is a world away from the fast-developing cities of Somali Region, where investment is being channeled into shopping centres, hotels, large abattoirs and new housing.

On the edge of the settlement, one of the structures is seemingly packed full of people. Inside, children crouch on the floor, clutching notepads and pencils. Standing over them is their teacher, Fassah, a wiry man who points to Somali letters on the blackboard. 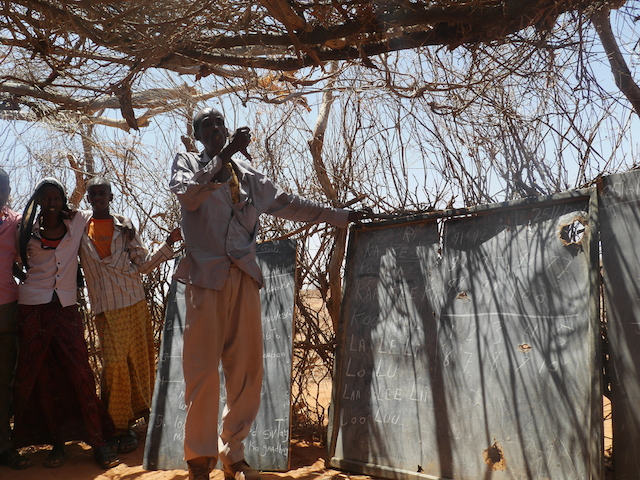 Fassah is one of the many teachers working with pastoralist communities across the Ethiopia’s Somali Region who travels with the pastoralists. He points to Somali letters on a blackboard. Credit: William Lloyd-George/IPS

“Without these classes the community would find it difficult to learn how to read and write. It opens doors for them,” Fassah tells IPS during breaktime. He is one of the many teachers working with pastoralist communities across the region who travels whenever and wherever the pastoralists go.

It’s only now as a 20-year-old after he’s learned his letters, that Abdi can even entertain the thought of furthering his education.

“Now we can even go to Jijiga university,” he tells IPS as he stands outside the structure that serves as a school.

“Our parents never dreamed of such education, now we can learn so much and help our community,” Abdi says. 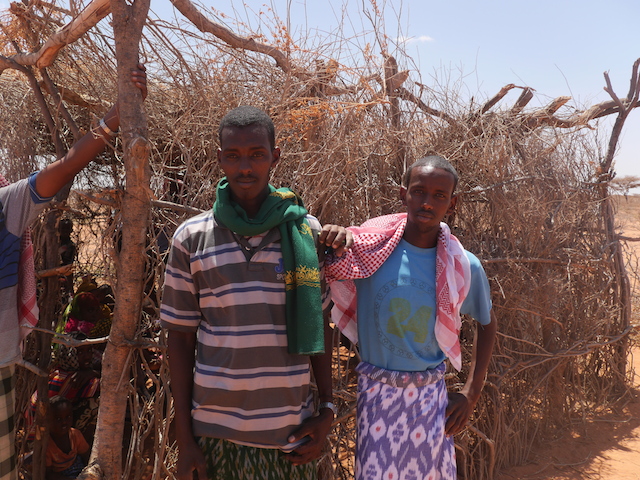 Abdi, 20 (right), standing outside his class with a friend. His pastoralist community, situated here outside the town of Shilabo in Somali Region, Ethiopia, has a teacher who now travels with them. Credit: William Lloyd-George/IPS

Somali National Regional State, or Zone 5, accounts for more than 20 percent of Ethiopia and shares a porous 1,600 km border with war-ravaged Somalia. The population of the region is believed to be more than five million, with pastoralists counting for more than 80 percent.

Owing to the climate and vegetation variations, mobility is a necessary response to survive. Many experts see pastoralism as a sophisticated land use system and although pastoralists only account for 15 percent of the entire Ethiopian population of about 92 million, it is believed they contribute 40 percent of the nation’s agricultural gross domestic product.

The pastoralists of Somali region make their living raising cattle, camels and goats. In the arid and drought-prone region, they are forced to move from place to place in search of pasture and watering holes for their animals.

As a result of the communities’ lifestyle, formal education has never been an option and the youth are usually educated by the elders.

While mobile services have existed in several forms for decades in Somali region, in recent years the regional government together with various NGOs have led an initiative to substantially increase these services across the region. In order to improve the lives of pastoralists communities, mobile health, education and veterinarian services have been created to travel to where these communities live.

The government mobile education system, though, allows pastoralist children to be educated on the move and once they complete a certain level they can join the national high schools and later universities.

As the class finishes, the kids, accustomed to the heat, play games in the burning sun and the elder leads us over to an acacia tree where hundreds of goats enjoy the shade. Mahmud, part of the government’s mobile veterinarian team set up to treat the pastoralists’ animals, sprays a blue disinfectant on a goat’s wound.

The vets bring with them vaccinations and medicine for skin disease and other infections. In recent years, increasing sedenterisation and market orientation is encouraging more rearing of cattle and sheep by the pastoralists, making the services of veterinarians a necessity.

In a nearby community, outside one of the shelters, a small queue has formed. Inside a female health worker sits on a mat, medicine sprawled out in front of her as she attends to a patient. 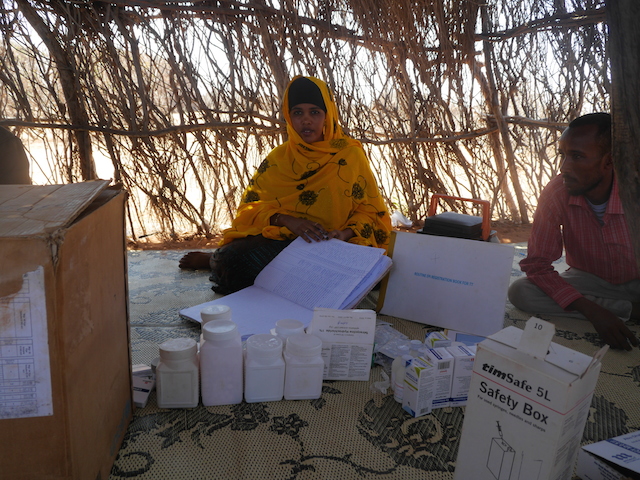 A mobile doctor writes up her notes. She is part of a Mobile Health and Nutrition Team, one of 51 across the Ethiopia’s Somali Region, funded and supported by United Nations Children’s Fund and other NGOs. Credit: William Lloyd-George/IPS

The health worker is part of a Mobile Health and Nutrition Team, one of 51 across the region, put in place by the government but funded and supported by United Nations Children’s Fund and other NGOs, to provide a health and nutrition safety net to the most vulnerable communities in inaccessible areas. It is part of an effort to achieve the Millennium Development Goals and a drive to get basic services to even the most cut-off communities.

The team provides both preventative and curative services, with a focus on young children and pregnant women. The care provided includes vaccinations, water purification chemicals, monitoring and treatment of child malnutrition, and providing iron supplements, tetanus shots and other neonatal support for pregnant and nursing mothers. They are also responsible for referring emergency cases to the local hospitals.

On the way back to Jijiga, we pass through Gudhis town, previously a hostpot for fighting between government forces and the Ogaden National Liberation Front (ONLF), rebels fighting for secession from Ethiopia. Residents in the town say it is now peaceful and the regional government believe their Liyu Police force has managed to substantially weaken the ONLF since its creation in 2008.

While the Liyu Police were primarily created to fight the ONLF, regional government officials say they are now being transformed into a force for development and put to work on projects around the region.

“Development is key to peace in the region, without it there will be no security,” the Somali Regional President Abdi Mohamoud Omar tells IPS. “This is why we want the Liyu to be a force for development, build wells, roads and help the people of this region. When we have development and security, the anti-peace elements fade away.” 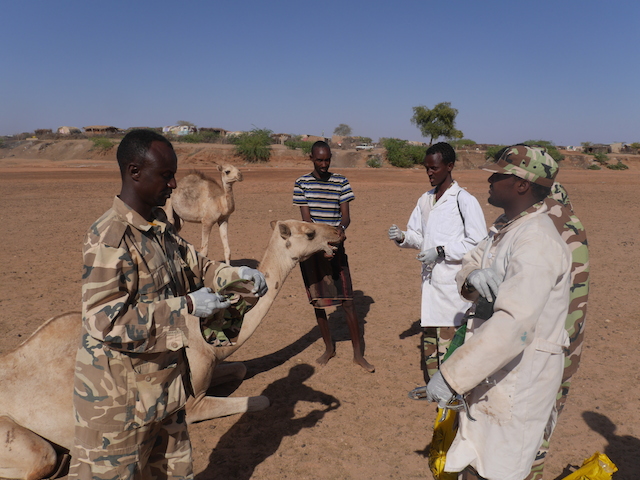 Efforts to transform the force are seemingly underway. On the way out of the town we come across Liyu police who are clearing the way for a road to link the town with the highway. In our last stop we visit Bulali, a town very well-known in Somali culture for its historic festivals. As the sun sets over the picturesque little oasis-like settlement, hundreds of camels stand around in what is a mighty river in wet season.

We pass a water well, which the Liyu Police helped build and which will now bring water to dozens of communities.

“My father was killed by a lion while trying to find water,” Abdulahi, a camel herder, tells IPS as he stands over the well. “It is emotional to now have water in this area, knowing what our people have gone through to get water in the past.”

Members of the Liyu police mobile veterinarian team, former active combatants, now trained up to move around treating livestock, stand in white lab coats, sinking huge needles of vaccination into moaning camels. They give the medicine to treat skin disease and the local camel herders say it has dramatically increased the camels’ health.

“We were always wandering, trying to find water and food, sometimes we did not have the capacity to see a vet, let alone a doctor for ourselves,” Abdulahi says as he gets ready to prepare his camels for nightfall. “These mobile teams really changed our lives, giving us access to services we never thought we would have.”