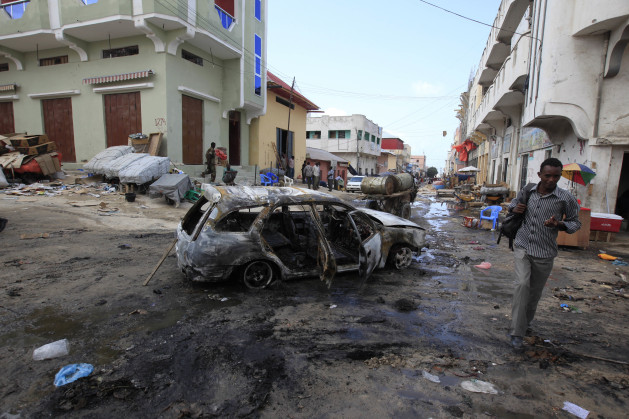 An attack in Somali capital Mogadishu suspected to have been carried out by Al-Shabaab. Credit: Omar Faruq/IPS

ADDIS ABABA , Sep 28 2013 (IPS) - Strong action now expected against the al-Shabaab group may well end up strengthening the group rather than weakening it, local people fear. The extremist group is suspected of involvement in the attack on the Westgate mall in Nairobi.

In the new round of confrontation expected, many people fear they will suffer most. “As always when these attacks happen, we are the ones who end up suffering,” a 23-year-old student who gave his name only as Mohammed told IPS on phone from Somali capital Mogadishu. “When the politicians and armies fight, our suffering is pushed aside.”

The Islamist group had been on the back foot in Somalia for some time. It faced dwindling support in recent years from an increasing disenfranchised diaspora and from a Somali population growing increasingly tired of violence.

“The attack shows that Shabaab under Godane is a force to be reckoned with and a staunch ally of al-Qaeda.”

Several signs have emerged of a weakening of the group. In recent months, al-Shabaab was kicked out of Bakara Market and Kismayo port in Somalia. These were two strategic locations for the group, and huge sources of their income.

Despite an increase in the murder of journalists and bombings in the capital, a serious attack on the national courts and on the UNDP compound in Mogadishu, many analysts had been pointing to a diminishing al-Shabaab. The Somali Transitional Federal Government (TFG) had been heralded for bringing in a new era of stability for Somalia which saw diaspora returning and restoration of a certain degree of normality.

“Support for al-Shabaab in Somalia is low,” Ahmed Soliman, Somalia expert at the London-based Royal Institute of International Affairs (Chatham House) told IPS. “Their insurgent tactics targeting innocent civilians gain little support from Somalis who suffer from their actions or Kenyan ethnic-Somalis, who have to endure the negative consequences of being associated with this violence.”

But, he said, “there is a minority at home and abroad who will be emboldened by this attack and who may seek to support the efforts of al-Shabaab.”

The attack on Westgate could seek to draw strength from its growing weakness. The group could capitalise on the reasons for its origin.

Following the U.S-backed invasion of Somalia by Ethiopia and an African force in 2006, the Islamic Courts Union (ICU) that had been dominant in ruling Somalia was driven out of the capital. A youth wing of the ICU took up arms against the “invaders”. The group, known as al-Shabaab, or ‘the youth’, continues to fight foreign forces.

After Ethiopia sent in significant forces against it in 2011 to bolster Kenyan and African Union troops, al-Shabaab has faced several strategic setbacks. These led to infighting between leaders of the group. It is believed that some leaders were concerned that others were becoming too involved with the global jihadist movement and al-Qaeda.

Al-Shabab leader Mukhtar Abu Zubeyr, known as Godane, took over supreme leadership this summer, knocking out the more moderate leaders. He has frequently voiced his loyalty to Osama bin Laden and al-Qaeda.

“The attack shows that Shabaab under Godane is a force to be reckoned with and a staunch ally of al-Qaeda,” Stig Jarle Hansen, author of ‘Al-Shabaab in Somalia’ and an expert on Somalia told IPS. “This strengthens al-Shabaab in their own eyes, and strengthens Godane, as well as the organisation in the eyes of Al-Qaeda. But it could hurt their Kenyan networks as Kenya intensify their prosecutions against Somalis residing in Kenya.”

According to Hansen, Al-Shabaab may have attempted to take advantage of the Somali people’s increasing hostility towards Kenya’s support of the Ogadeni clan which dominates Juba state. The state has seen a strong move to secede from Somalia with Kenyan support.

According to Hansen, the attack may also increase support for Godane by “demonstrating an ability to act, and to stop some al-Shabaab leaders who were thinking of leaving from doing so.”

The attack may on the other hand increase financial and political support from the international community for military campaigns against al-Shabaab especially from the U.S. and from European countries, Hansen said. But he warned that “this creates a highly predatory police and army that enables al-Shabaab to score propaganda victories. It also creates a highly corrupt force that al-Shabaab can easily bribe.”

Somalia expert Alula Iyasu said that the government in Mogadishu needs to be careful how it responds.

“While the law and order aspect is critical, the worst thing Mogadishu can make is to think, like the Bush administration did, that terrorism is the work of a finite number of bad people and if you arrest or kill all, the problem goes away. Not the case,” Iyasu told IPS.

“This episode in Nairobi should push Mogadishu and its donors to do more on job creation, schools and other services.”

The Westgate attack will serve as a warning that al-Shabaab, despite recent setbacks, is able to launch more terrorist attacks and to do so beyond Somalia’s borders. Now that the group has shown a stronger alliance with al-Qaeda, many diplomats are concerned Westgate might just be the beginning of a spate of attacks.

“Western and African Union countries will need to analyse the internal dynamics of al-Shabaab more closely, and how it has recently evolved and reorganised after being removed from Mogadishu and Kismayo,” Soliman from Chatham house tells IPS. “I would fully expect intensified efforts to target Godane and the leadership of al Shabaab.”