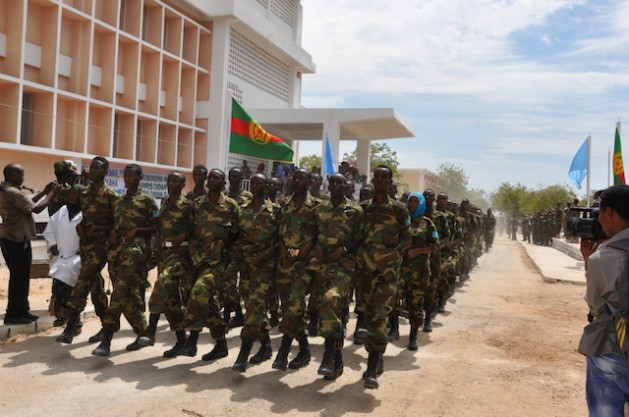 Somali government forces march during an army day parade in Mogadishu, Somalia. The country’s armed forces are not strong enough to control the threat of the Islamism extremist group Al-Shabaab and are propped up by Ethiopian troops and African Union peace-keepers. Credit: Abdurrahman Warsameh/IPS

ADDIS ABABA , May 17 2013 (IPS) - Despite comments by Ethiopian Prime Minister Hailemariam Desalegn suggesting the pending withdrawal of his country’s troops from Somalia, many experts have voiced doubts that Ethiopia will pull out of Somalia before it is capable of handling its security without assistance.

“Ethiopia has a big interest in Somalia and will remain, keeping its eyes wide open there for some time,” Abel Abate, from the state-funded think tank the Ethiopian International Institute for Peace and Development, told IPS.

“One purpose is to avoid the threat posed by the Islamist Al-Shabaab group, which sees Ethiopia as an enemy. And secondly, to show the world that it has made a significant contribution to peace and stability in the region.”

Somalia is still recovering from nearly two decades of war, and large parts of the Horn of Africa nation have been under siege by the extremist Al-Shabaab. The Somali transitional federal government, which is propped up by the African Union Mission in Somalia (AMISOM) and regional troops, barely has control over the country’s capital Mogadishu.

“Ethiopia wanted ... to show the world that it is the maker or breaker of Somalia.” -- Abel Abate

While African countries have sent troops to Somalia under AMISOM, Ethiopia’s troops, which have been in the country since 2011, do not operate under the AU mission.

Last year, with the help of regional forces, the Somali government was able to recapture some key points in the country, including the port of Merca and the city of Jowhar, the biggest town under Al-Shabaab control, situated 70 km and 90 km from Mogadishu respectively.

However, in mid-March, Ethiopia pulled its troops from the southern town of Hudur without warning AMISOM. Following the withdrawal, Al-Shabaab immediately took control of the town in its first major military success since it retreated from Mogadishu in August 2011.

“Ethiopia pulled out from certain places in Somalia in order to send a signal to the international community that unless you support us, we will not shoulder all of Somalia’s problems,” Abate said.

“Ethiopia wanted to put pressure on the agencies and countries which have been supporting AMISOM but not Ethiopia, and to show the world that it is the maker or breaker of Somalia.”

Meanwhile, an Ethiopian government representative told IPS that the lack of international support for Somalia has made it difficult for this country to withdraw troops.

“Ever since we intervened in Somalia our initial plan was to hand it over to AMISOM and Somali forces,” Ethiopian government spokesperson Dina Mufti told IPS.

“However, we feel that international support has been lagging, not only for AMISOM, but for the whole Somali project, which has made it difficult for us to withdraw while these forces are too weak to take over.”

Dina hoped that a recent conference in London on May 7, where over 50 countries and organisations met to discuss how best to aid Somalia, might change this. However, he stopped short of saying it would be a game changer.

“One thing is for sure, we remain fully committed to supporting Somalia,” Dina said. But he could not say if Ethiopia would wait until AMISOM and the Somali army took over key strongholds before pulling out. “That I can’t say.”

Unlike AMISOM forces in Somalia, which are funded by the AU, Ethiopia pays for their operations themselves. This is believed to be one of the biggest contributing factors to Ethiopia’s frustration.

“Hailemariam has … tried to put pressure on the international community to put more resources into the issue, so Ethiopia can pull out gradually,” Kjetil Tronvoll from the Oslo-based International Law and Policy Institute told IPS.

“I do not think they will pull out prematurely, I think they might regroup some of their forces, but I don’t think they will just leave it open for Al-Shabaab to regroup and resurface and stay in that area currently controlled by Ethiopia.”

Tronvoll said he believed that Ethiopia would use its presence in Somalia as a bargaining chip for its agenda.

While it is seemingly unlikely that Ethiopia will immediately withdraw its troops, contradictory statements made last month by members of the Ethiopian government did result in confusion.

On Apr. 23, Hailemariam told parliament that AMISOM was taking too long to replace Ethiopian troops and that the main focus should be to accelerate their withdrawal.

However, the next day the Ministry of Foreign Affairs said Ethiopia would not withdraw troops until AMISOM and the Somali army were ready to take over.

But it is uncertain how much longer this will take.

According to Hassan Rafiki, an expert consultant at the Institute for Peace and Security Studies working with the government of Somalia, AMISOM is not as aggressive as it was in the initial stages.

“The troops have now found room to breathe from Al-Shabaab and the mission is, therefore, not encouraged or enthusiastic to replace the Ethiopian troops,” Rafiki told IPS.

“Somalia is now becoming a money machine for troop-contributing countries in the region, who wish to train new recruits for their armed forces, instead of their initial intention to help the Somali government and people.”

Another concern is the lack of AMISOM resources. “In its current capacity of little over 17,000 (troops), AMISOM is over-stretched. It won’t be able to fill the vacuum left by Ethiopia unless its troop levels are increased,” Abdi Aynte, director of Mogadishu’s first think-tank the Heritage Institute for Policy Studies, told IPS.

“Ethiopia must understand that it’s in its best interest to shift course and work with the Somali people and their government to reestablish strong state institutions,” said Aynte. “A stable, democratic Somalia is the best possible neighbour that Ethiopia could ask for in the world’s toughest region.”