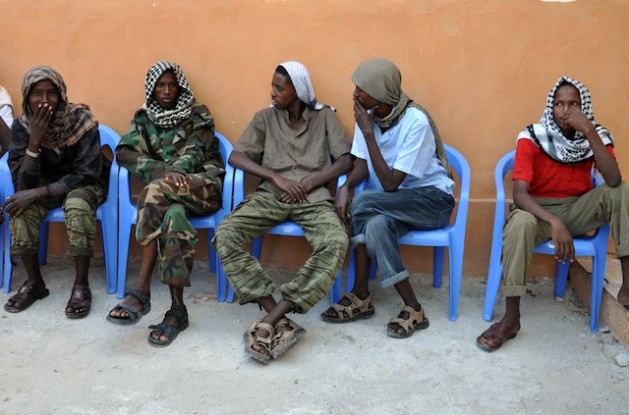 Former Al-Shabaab combatants who handed themselves over to the Somali government. Defections by Al-Shabaab members were rising dramatically, with many more expected in the coming months. Credit: Abdurrahman Warsameh/IPS

MOGADISHU/NAIROBI, May 8 2013 (IPS) - At 18, Farah Osman should not be a battle-hardened soldier. He should not have spent the last seven years fighting for the Somali Islamist extremist group Al-Shabaab, or have been trained by foreign jihadists in handling and repairing weapons and improving his shooting skills.

But he has. And now he is also a deserter. The tall, slim teenager is one of about 800 former Al-Shabaab fighters staying at Mogadishu’s Sarendi Rehabilitation Centre. He hopes he will soon be integrated back into society and into the Somali Armed Forces.

Osman cannot recall the exact month he was recruited as a fighter by the Al-Qaeda-linked Al-Shabaab, but it was near the end of 2006, the year when United States-backed Ethiopian troops invaded Somalia to prop up the Somali Transitional Federal Government.

He was walking home from school on a steaming hot day when his former teacher from a local dugsi or religious school stopped him and took him to an Al-Shabaab base.

Osman sat panicked and alone under a tree in the base for a while, then the teacher returned with a group of men and bottles of mineral water and dates which they distributed to the young boys. Preachers then spoke for hours about the holy war, animosity with Ethiopia, and the importance of defending the country.

“Heaven, money and prestige were convincing incentives. Their promises were irresistible,” says Osman.

He says everyone seemed ready to sacrifice their lives to defend their religion and their country.

His trainers were all Somalis, including Adan Hashi Farah “Eyrow”, a war veteran who founded Al-Shabaab, the armed wing of the Union of Islamic Courts. Farah was killed by a U.S. airstrike on his house in the town of Dhuusomareeb in central Somalia in May 2008.

“They offer a mobile phone and a monthly salary of 50 dollars,” Osman says. But he adds that this was not the only thing that pushed him to join the organisation. “I wanted to seem powerful and to be a respected man, and people (at that time) respected a man with a gun.”

For five years, Osman moved through the war-scarred buildings in Mogadishu, around the forests near the Kenya-Somalia borders and in southern Somalia on his mission to kill Somali and Ethiopian forces and African peacekeepers in the hope of going to heaven after death.

Then in October 2011, Al-Shabaab carried out a suicide attack on the education ministry in Mogadishu. More than 70 people were killed, most of them students checking their scholarship status.

“This is when I realised that Al-Shabaab was no longer fighting for religious or jihad reasons,” Osman tells IPS in a restaurant close to Villa Somalia, the country’s White House. “That is not what jihad is meant to represent.”

Osman is not the first or last Al-Shabaab fighter to desert the organisation. Hundreds of fighters across southern Somalia have turned in their guns and surrendered since 2010, when the government offered them amnesty, protection and a better future.

With Al-Shabaab under financial strain because of multiple frontlines and the loss of strategic towns in the country, many more fighters are expected to turn themselves in to the government, which has offered former fighters accommodation and job opportunities.

On one single day in September 2012, in the town of Jowhar, some 80 km from Mogadishu, 250 Al-Shabaab fighters became the largest number to surrender in a single day to Somali forces and the African Union Mission in Somalia.

Mogadishu intelligence chief Khalif Ahmed Ereg told reporters at a press conference in February that defections by Al-Shabaab members were rising dramatically, with many more expected in the coming months. However, the country’s National Intelligence and Security Agency (NISA) first investigates defectors before allowing them to join rehabilitation programmes.

Critics have raised concerns about the vetting process for defectors, claiming that many of them still have close ties to the extremist organisation.

Ibrahim Sheikh Hassan, an analyst and former professor of political science at Mogadishu’s pre-war Strategy College, tells IPS that NISA’s screening process is weak and insufficient and that Al-Shabaab are taking advantage to carry out a “planned infiltration” of the government’s security forces.

“They offer some accurate information to make their ‘sham’ defections appear genuine while planning destruction operations within the government,” Hassan adds.

It is a claim that NISA denies, but many of the recent killings, including a bomb blast and suicide attacks in the capital, have been blamed on sham defectors.

In January, an Al-Shabaab member who claimed to have defected from the group tried to kill the prime minister in a suicide bombing at the presidential palace. One government soldier was killed and several others were wounded.

“The agency should come up with another strategy of using the defectors as an asset without officially incorporating them into the agency. Their long-term effect should be a matter of concern.”

The Sarendi Rehabilitation Centre in Mogadishu, where Osman resides, is currently the only one of its kind in the country. But speaking to the national assembly in March, Prime Minister Abdi Farah Shirdoon said his government planned to open 10 centres to accommodate and rehabilitate Al-Shabaab deserters and soldiers captured in the war.

An official from the government’s rehabilitation programme, who asked to be referred to only as Ahmed, told IPS that there were currently another 800 Al-Shabaab defectors in southern and central regions of Somalia.

Ahmed told IPS the interior ministry was planning to open other rehabilitation centres in south and central Somalia – in Kismayo, Balad Weyne, Baido, Garbaharey, Jowhar, Marka and Guriceel – to accommodate the defectors.

The Sarendi Centre, which opened in March 2012, is run by Somalia’s interior and national security ministry and financially supported by Norway’s foreign ministry. It provides skills training, including football, driving and fishing lessons, and also teaches technical skills.

“Everyone is taught what he has an interest in,” says Osman.

But his interests remain centred on war. He wants to finish his mission of killing the “bad guys” – but as a soldier wearing a government uniform.