NIAMEY , Apr 23 2012 (IPS) - Increasing numbers of Malian women are being raped by Tuareg rebels and armed groups that have swept across the north of Mali since the beginning of year, expelling all government troops from the region. 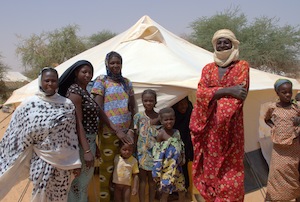 Increasing numbers of Malian women are being raped by Tuareg rebels and armed groups that have swept across the north of Mali since January. Credit: William Lloyd-George/IPS

According to Corinne Dufka, senior West Africa researcher at Human Rights Watch, who is currently on a mission in Mali, there have been reports of rape and sexual violence taking place in towns and villages across the region.

“We’re very concerned about what appears to be a drastic increase in the targeting and sexual abuse of women and girls by armed groups in the north,” Dufka told IPS.

“Since rebel groups consolidated their control of the northern territory they call the Azawad, Human Rights Watch has documented several cases of rape and many others cases in which girls and women have been abducted from their homes, towns and villages, and very likely sexually abused.”

Dufka reports that most of the abuses have been, “perpetrated by rebels from the MNLA and to a lesser extent Arab militias allied to them.”

The National Movement for the Liberation of Azawad (MNLA) is an umbrella term given to groups of armed Tuaregs who have come together with the declared goal of administrating an independent state, Azawad.

Since the colonial French left the region in 1960, there have been several Tuareg rebellions against the Malian government. Previous uprisings ended in negotiations and the appointment of rebel leaders to state positions.

However, the rebels say the Malian government has failed to stick to promises made in negotiations, and continue to demand an independent state.

This time, armed with a heavy arsenal of weapons left over from previous rebellions, and additional arms coming from Libya over the last few years, the MNLA have made unprecedented advances. This was made easier by the coup in Bamako and the subsequent withdrawal of state military in the north.

Commenting on the allegations made by Human Rights Watch, MNLA spokesman Moussa ag Assarid, currently in the Malian city of Gao, denied MNLA men were involved in the sexual violence. “These men are not MNLA, but are other men around,” says Ag Assarid speaking over the phone from Gao. He admitted, however, that “We cannot control all the people in Azawad.”

Although the MNLA declared an independent state on Apr 6, residents in the region say the rebel movement does not really seem to be in control. “One day, one armed group will come into town, then the next day it will be another; we feel very unsafe,” one resident in Gao who preferred to remain anonymous told IPS over the phone.

Since the conflict began, several armed Islamist groups have emerged in the region, adding to concerns for the future of women’s rights.

One group, Ansar Dine, led by Iyad Ag Ghali, a prominent leader in previous Tuareg uprisings, has begun attempting to enforce Sharia law in the north. Soon after entering Timbuktu, Ag Ghali announced the group’s beliefs on the radio.

“Misfortune is due to people’s lack of faith in God, and because they have abandoned the practice of Sharia, because we have changed our way of life under the influence of whites,” he said.

While Ag Ghali is estimated to only have around 300 men in his ranks, his influence goes far and wide. Many MNLA commanders are still loyal to him from previous rebellions, as are drug smugglers, and other Islamist groups in the region.

Since Ansar Dine announced Sharia law, there have been unconfirmed reports of Ag Gali travelling with leaders from AQIM, the regional Al Qaeda group. It is also believed that Nigeria’s extremist group, Boko Haram, and the Movement for Unity and Jihad in West Africa have been operating in the region.

As residents report foreigners increasingly being spotted in the Islamists ranks, fears grow that Ag Ghali’s goal of creating an Islamic state could be closer to being achieved. Many Malian women, who have enjoyed freedom and relative equality compared to women in other countries in the region, are concerned this freedom could soon be a thing of the past.

“Since these groups have arrived, we hardly go outside, we are terrified what will happen if we forget to do something they have told us to do,” a 40-year-old market vendor in Timbuktu, who also wished to remain anonymous, told IPS.

“I have been working in the market all my life, it is how I feed my children, how can I just stop now? Even if they allow me to work, I am not used to sitting in the baking heat all day covered head to toe.”

It is reported that Ansar Dine and other Islamist groups have been going door-to-door ordering women to wear veils and respect Islamic law. They have been going to hairdressers and ripping down photos of unveiled women, shutting down brothels and prohibiting the sale of alcoholic drinks.

While there have not been any reports of women being punished by Ansar Dine for failing to adhere to Sharia law, women in the region are growing increasingly fearful of the possibility that they will start being punished if the Islamist group gains more control.

Food, electricity and infrastructure have also been severely affected by the conflict. In many cities food and water are running low, and it has been difficult for civilians to receive humanitarian aid.

“The vulnerability of women in the north is increased by the lack of medical care, non-existent rule of law institutions, and limited humanitarian assistance which could mitigate their suffering and deter further abuse,” says Dufka.