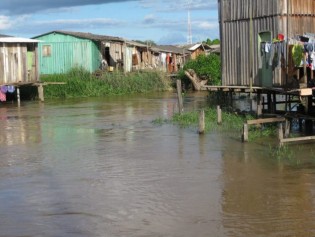 By Mario Osava
“We want to make history," agreed the teachers at the Chiquinho Cartaxo Comprehensive Technical Citizen School. They are the first to teach adolescents about generating power from bad weather in the semi-arid Northeast region of Brazil.

By Mario Osava
“The sun which used to torment us now blesses us," said one of the 19 women who run the Community Bakery of Varzea Comprida dos Oliveiras, a settlement in the rural area of Pombal, a municipality of the state of Paraiba, in Brazil's semi-arid Northeast.

No More Mass Deaths from Drought in Northeast Brazil

By Mario Osava
The drought that has plagued Brazil’s semiarid Northeast region since 2012 is already more severe than the 1979-1983 drought, the longest in the 20th century. But prolonged dry spells no longer cause the tragedies of the past.

By Mario Osava
The decisions taken by the Brazilian government in the fight against drought in the country’s semiarid Northeast are an example of the disconnect between politicians and the citizens, which triggered an unexpected wave of protests in June.
ADVERTISEMENT ADVERTISEMENT