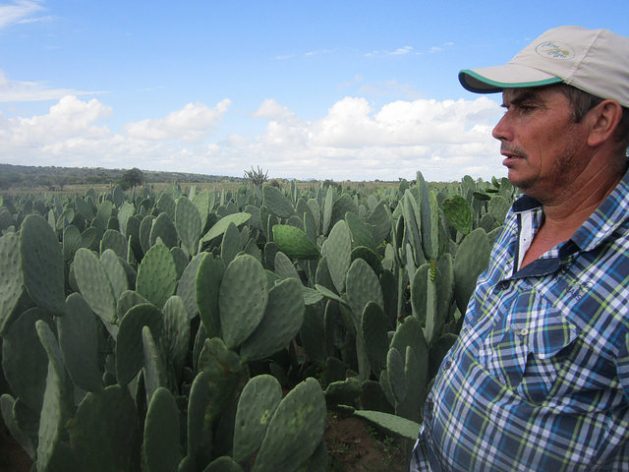 José Antonio Borges is surrounded by the forage cactus, ready to be harvested, that he planted on his farm. It is the basis of the diet of their 30 cows, which allows them to produce 400 litres of milk per day, using an automatic milking system twice a day, in Ipirá, in the Jacuípe basin, in Brazil’s northeastern semi-arid ecoregion, where the optimal use of water is transforming family farms. Credit: Mario Osava / IPS

IPIRÁ-PINTADAS, Brazil, May 8 2018 (IPS) - Cattle ranching has been severely affected by drought in Brazi’s Northeast region, but it has not only survived but has made a comeback in the Jacuípe river basin thanks to an optimal use of water.

José Antonio Borges, who owns 98 hectares of land and 30 cows in Ipirá, one of the 14 municipalities in the basin, in the northeastern state of Bahia, almost tripled his milk production over the last two years, up to 400 litres per day, without increasing his herd.

To achieve this, he was assisted by technicians from Adapta Sertão, a project promoted by a coalition of organisations under the coordination of the Human Development Network (Redeh), based in Rio de Janeiro.

“If I wake up and I don’t hear the cows mooing, I cannot live,” said Borges to emphasise his vocation that prevented him from abandoning cattle farming in the worst moments of the drought which in the last six years lashed the semi-arid ecoregion, an area of low rainfall in the interior of the Brazilian Northeast.

But his wife, Eliete Brandão Borges, did give up and moved to Ipirá, the capital city of the municipality, where she works as a seamstress. Their 13-year-old son lives in town with her, in order to study. But he does not rule out returning to the farm, “if a good project comes up, like raising chickens.”

Borges, who “feels overwhelmed after a few hours in the city,” points out as factors for the increased dairy productivity the forage cactus (Opuntia ficus-indica Mill), a species from Mexico, which he uses as a food supplement for the cattle, and the second daily milking.

“The neighbours called me crazy for planting the cactus in an intensive way,” he said. “We used to use it, but we planted it more spread out.” Today, at the age of 39, Borges is an example to be followed and receives visits from other farmers interested in learning about how he has increased his productivity. 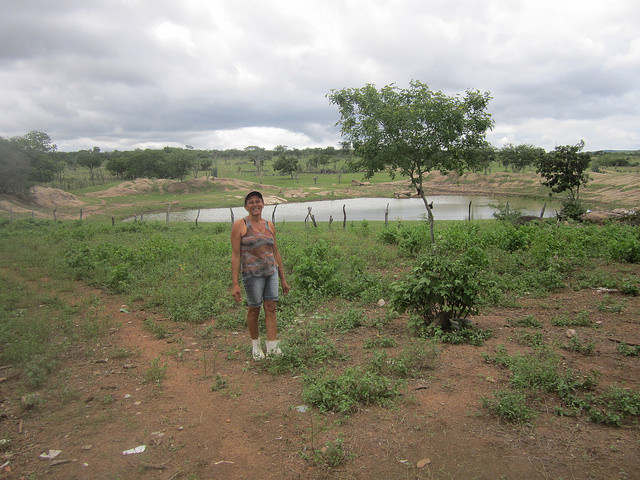 Normaleide de Oliveira stands in front of the pond on her farm that did not even run out of water during the six years of drought suffered by Brazil’s Northeast region. Water availability is an advantage of family farmers in the Jacuípe river basin, compared to other areas of the country’s semi-arid ecoregion. Credit: Mario Osava / IPS

He started after being taken to visit another property that used intensive planting, in an effort to convince him, said Jocivaldo Bastos, the Adapta Sertão technician who advised him. “Actually I don’t use cacti,” Borges acknowledged when he learned about the innovative tecnique.

The thornless, drought-resistant cactus became a lifesaving source of forage for livestock during drought, and is an efficient way to store water during the dry season in the Sertão, the popular name for the driest area in the Northeast, which also covers other areas of the sparsely populated and inhospitable interior of Brazil.

Also extending through the semi-arid region is the construction of concrete tanks designed to capture rainwater, which cost 12,000 reais (3,400 dollars) and can store up to 70,000 litres a year. With this money, 0.4 hectares of cactus can be planted, equivalent to 121,000 litres of water a year, according to a study by Adapta Sertão.

But that requires attention to the details, such as fertilisers, drip irrigation, clearing brush and selecting seedlings. Borges “lost everything” from his first intensive planting of the Opuntia forage cactus. 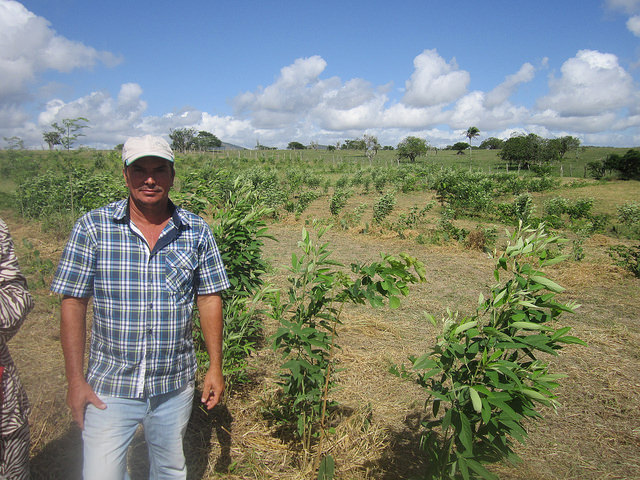 Parched, hard-packed land without vegetation is now green and fertile thanks to farmer and livestock breeder José Antonio Borges, who regenerated the land, supported by technicians from Adapta Sertão. It is now what he refers to as “the forest” where he grows watermelons and fruit trees, in Brazil’s semi-arid Northeast. Credit: Mario Osava / IPS

Then he received advice from agricultural technician Bastos and currently has three hectares of cactus plantations and plans to expand.

At the beginning, he was frightened by the need to increase investments, previously limited to 500 Brazilian reais (142 dollars) per month. Now he spends twelve times more, but he earns gross revenues of 13,000 reais (3,700 dollars), according to Bastos.

The second milking, in the afternoon, was also key for Normaleide de Oliveira, a 55-year-old widow, to almost double her milk production. Today it reaches between 150 and 200 liters a day with only 12 dairy cows, on her farm located 12 km from Pintadas, the city in the centre of the Jacuípe basin.

“It is the milk that provides the income I live on,” said the farmer, who owns 30 more cattle. “I used to have 60 in total, but I sold some because of the drought, which almost made me give it all up,” she said.

The Jacuípe basin is seen as privileged compared to other parts of the semi-arid Northeast. The rivers have dried up, but in the drilled wells there is abundant water that, when pumped, irrigates the crops and drinking troughs. 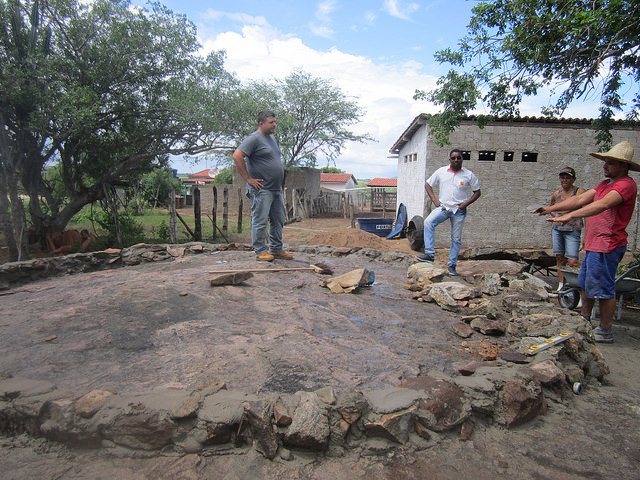 This concrete tank is being built on a large rock on the farm of Normaleide de Oliveira, in the municipality of Pintadas, to be used for fish farming. Stones were used to make the walls using cement, on top of a rock in order to facilitate irrigation by gravity, in an example of agricultural development that optimises the use of the scarce water in the Sertão eco-region in Northeastern Brazil. Credit: Mario Osava / IPS

Oliveira has the advantage of having two natural ponds on her property, one of which never completely dried up during the six years of drought.

Now she is building a concrete tank on a large rock near her house that she will devote to raising fish and irrigating her gardens. Its location up on a rock will allow gravity-fed irrigation for the watermelon, squash and vegetables that Oliveira, who lives with her daughter and son-in-law, plans to grow.

The pond was proposed by Jorge Nava, an expert in permaculture who has been working with Adapta Sertão since last year, contributing new techniques to optimise the use of available water.

Adapta Sertão’s aims are to diversify production and strengthen conservation, and incorporate sustainability and adaptability to climate change in family farming.

In Ipirá, Borges has a pond one metre deep and six metres in diameter, with 23,000 litres of water, surrounded by his cilantro crop. In the pond he raises 1,000 tilapia (Oreochromis niloticus), a species increasingly popular in fish farming.

Nearby is what he calls “the forest” – several dozen fruit trees on sloping ground with contour furrows, where he already used to plant watermelons using drip irrigation, which now coexist with the new project. 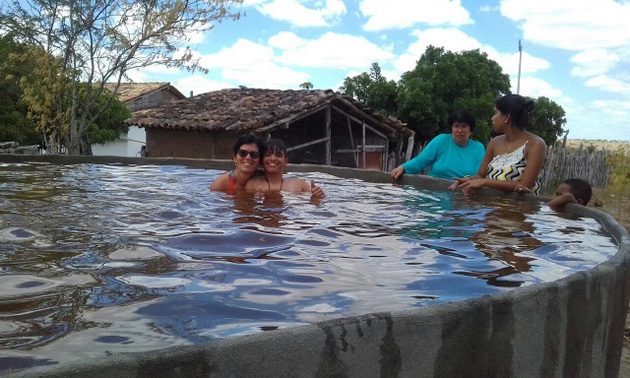 José Antonio Borges’ family members enjoy themselves in the 23,000-litre concrete pond built on his farm to irrigate the orchards and raise fish, taking advantage of the water in boreholes drilled on his land in Ipirá , in the semi-arid region of Northeastern Brazil. Credit: Courtesy of Jorge Nava.

“In 70 days he harvested 260 watermelons” and soil that was so dried up and hardened that the tractor had to plow several times, by thin layers each time, is now covered in vegetation, said Nava. “In 40 days the dry land became green,” he stated.

Contour furrows contain the water runoff and moisten the soil evenly. If the furrows were sloping they would flood the lower part, leaving the top dry, which would ruin the irrigation, the expert in permaculture explained.

This “forest” will fulfill the function of providing fruit and regenerating the landscape as well as making better use of water, boosting soil infiltration and acting as a barrier to the wind which increases evaporation, he said.

These are small gestures of respect for natural laws, to avoid waste and to multiply the water by reusing it, making it possible to live well on small farms with less water, he said.

In critical situations it is only about keeping plants alive with millilitres of water, until the next rain ensures production, as in the case of Borges’ watermelons.

Nava attributes his mission and dedication to seeking solutions in accordance with local conditions and demands to what happened to his family, who migrated from the southern tip of Brazil to Apuí, deep in the Amazon rainforest, in 1981, when he was three years old.

To go to school sometimes he had to travel nine days from his home, through the jungle. He became aware of the risk of desertification in the Amazon. The shallow-rooted forests are highly vulnerable to drought and deforestation, he learned.