No More Mass Deaths from Drought in Northeast Brazil 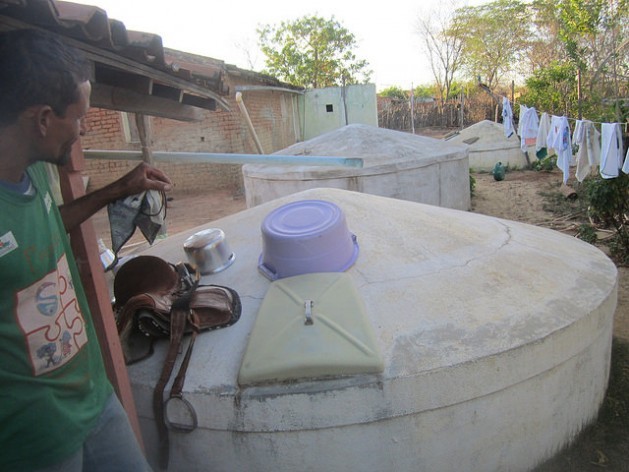 Water tanks to collect rainfall water behind a house in Buena Esperanza, a settlement of 45 families in the state of Pernambuco in Brazil’s semiarid Northeast region, where thanks to such initiatives the rural population manages to survive prolonged droughts, without the tragedies of the past. Credit: Mario Osava/ IPS

OURICURI, Brazil, Dec 30 2016 (IPS) - The drought that has plagued Brazil’s semiarid Northeast region since 2012 is already more severe than the 1979-1983 drought, the longest in the 20th century. But prolonged dry spells no longer cause the tragedies of the past.

There are no widespread deaths from hunger or thirst or mass exodus of people due to water shortages, like in the past when huge numbers of people would swarm into cities and towns and even loot the shops, or head off to distant lands in the more developed centre-south of the country, in search of a better life.

The lack of rains, nevertheless, impacts everything. The caatinga, an ecosystem exclusive to Brazil’s semiarid region, which consists of shrubland and thorn forest, looks dead with the exception of a few drought-resistant trees and areas where recent sprinkles have turned some shrubs green again.

The Tamboril reservoir, on the outskirts of Ouricuri, a city of 68,000 people in the state of Pernambuco, has been dry for more than a year now. Fortunately, the city is also supplied by water piped in from the São Francisco river, 180 kilometres away.

“The 1982-1983 drought was worse, not so much due to the lack of water, but because we did not know how to cope with the situation,” Manoel Pereira Barros, a 58-year-old father of seven, told IPS on his farm in Sitio de Santa Fe, about 80 kilometres from Ouricuri.

He got married at the height of the crisis, in 1983. “It was difficult for the entire family…we killed some oxen, we survived on the water from a cacimba (water hole), a few cattle and many goats. The animals saved us, the bean crop dried up,” he said.

That year, the governors of the nine states that make up Brazil’s semiarid region requested more help from the national government, pointing out that one hundred people a day were dying as a result of the drought.

According to the state governments in the region, 100,000 people died in the space of five years, although researchers put the number of deaths at more than 700,000. Most of those who died were children.

And one million deaths is the estimate of Networking in Brazil’s Semi-Arid Region (ASA), a network of 3,000 social organisations created in 1999 to promote the transformations which are improving the life of the population most affected by the drought: poor farmers in the Northeast. 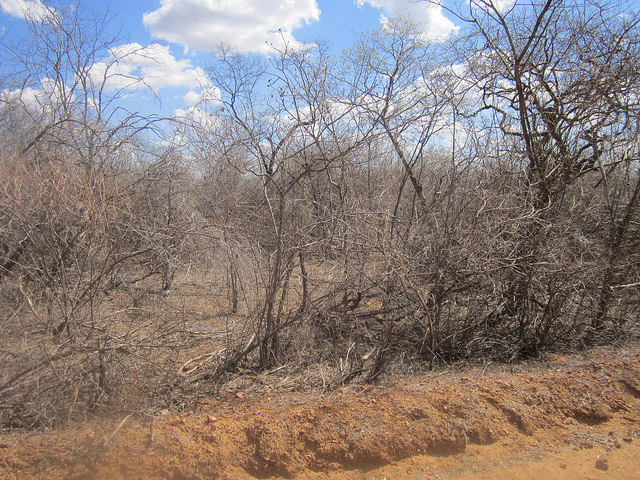 Apparently dead dry vegetation of the caatinga, an ecosystem exclusive to Brazil’s semiarid Northeast. But in general the plants are highly resilient and turn green again after even just a sprinkle. Credit: Mario Osava/ IPS

Distributing water tanks to collect and store rainwater for drinking and cooking was their first goal. Beyond assuring safe drinking water during the eight-month dry season, this initiative was at the centre of a new approach towards the development of the semiarid region, which is home to more than 23 million people in this country of 208 million.

One million water tanks have been built so far, about one-third by ASA, which distributes 16,000-litre family units made of concrete slabs that are installed with the participation of the beneficiaries, who also receive citizenship classes and training in water management.

To coexist with the local climate, overcoming the failed policies of the past based on “combating the drought”, is the movement’s slogan, which thus promotes learning about the ecosystem, capitalising on farmers’ traditional knowledge and fostering an intense exchange of experiences among rural communities.

Other methods for coexisting with the local ecosystem include contextualised education, which prioritises the local reality, agroecological practices, and the principle of storing everything, including the water used for irrigation and livestock, fodder for the dry season, and native seeds adapted to the local soil and climate.

These technologies, provided by the Advice and Help Centre for Workers and Alternative Non-Governmental Institutions (CAATINGA), a member of ASA, did not exist during previous droughts and are making the difference today, Barros said.

To these are added the Bolsa Familia, a monthly grant of 53 dollars on average, new retirement pensions for farmers, and other government social programmes that help farmers survive even when it doesn’t rain. 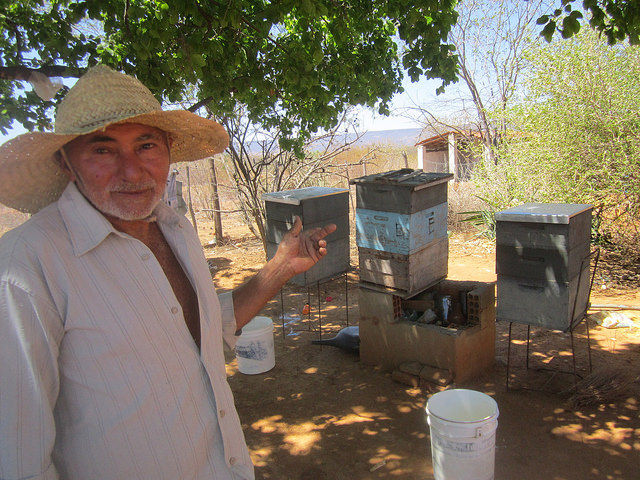 Manoel Pereira Barros shows the beehives on his small farm, now useless because the bees have left due to the drought. Honey production, one of the sources of income of many small farming families, will have to wait to be resumed until the rains return to Northeast Brazil. Credit: Mario Osava/ IPS

Barros decided to leave his land in 1993, at the end of another two-year drought, to look for work in vineyards and on mango plantations in the municipality of Petrolina, 200 km south of Ouricuri, on the shores of the São Francisco river.

“I spent 15 years away from my family, working with poisonous agricultural chemicals, that is why I look older than my age,” he said jokingly. “Here I only eat organic food.”

“I dreamed of having a water tank, which did not exist. Now I have three, and one of them still has water from the January rains. Used only for drinking water, it lasts over a year for five people,” he said. “We are very strict about saving, we used to waste a lot of water.”

Besides the water tanks, the community of 14 families has a pond dug in the rocky ground 70 years ago, to collect water from a stream. It has not dried out yet, but it is very dirty. “It needs to be cleaned,” said Clarinda Alves, Barros’ 64-year-old neighbour.

“Biowater”, a system of filters which makes it possible to reuse household sewage to irrigate vegetable gardens and fruit trees, is another technology which is expanding among the farmers of the semiarid region.

Despite this arsenal of water resources, plus the water increasingly distributed by the army in tanker trucks throughout the Northeast, Barros decided to stop growing vegetables and other crops, unlike many other farmers, who have managed to keep producing. He opted instead to prioritise the water for human and animal consumption.

ASA believes there is still much to do with respect to the question of water supply. To reach the goal of universalising “two water tanks”, there is still a need for 350,000 tanks for drinking water and 800,000 devoted to production. 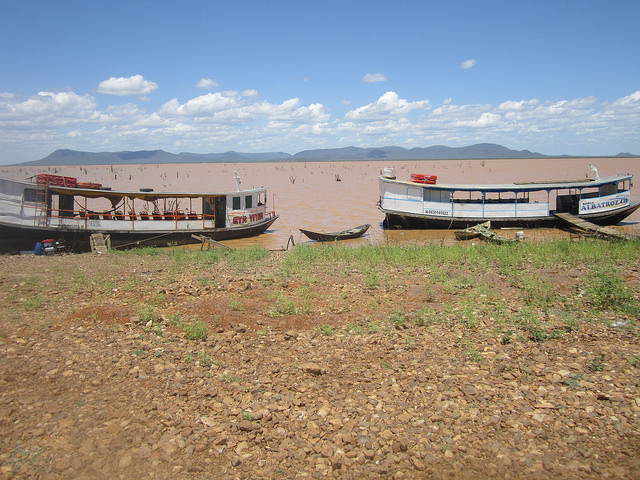 The water in Sobradinho, Brazil’s largest reservoir, covering 4,200 square kilometres in the state of Bahía, is 500 metres away from the normal shoreline due to the low water level – another impact of the drought that the country’s Northeast has been suffering since 2012. Credit: Mario Osava/ IPS

“Five water tanks” are needed, according to André Rocha, climate and water coordinator for the non-governmental Regional Institute for Appropriate Small-Scale Agriculture (IRPAA), a member of ASA, based in Juazeiro, in the Northeast state of Bahía.

Domestic use requires two tanks, one for drinking and cooking, and one for hygiene, so water for production purposes would be the third source, he said. The fourth is for emergencies or reserves, “like a blood bank, and the fifth would be dedicated to the environment, to recuperating freshwater sources, restoring the groundwater table and keeping rivers running year-round,” Rocha told IPS in his office.

But the task of “building coexistence with the semiarid ecosystem,” ASA’s goal, faces a political threat.

It will be difficult to maintain water collection and the strengthening of small-scale agriculture as public policies, after Brazil’s government took a conservative turn in August 2016, when the leftist Workers’ Party, which governed the country since 2003, lost power.

It also requires an ongoing ideological battle and communications effort, because “combating drought”, instead of adapting, is still the mindset of the country’s authorities and economic powers-that-be.

Large water projects, like the diversion of the São Francisco river to provide water to other rivers and basins in the Northeast, as well as the irrigation of the monoculture crops of agribusiness or large-scale agriculture destined mainly for export, are still being carried out to the detriment of family agriculture.

Hefty investments and official loans are devoted to agribusiness, despite previous failures and corruption, while funding is dwindling for ASA’s activities, which have proven successful in overcoming the effects of drought.