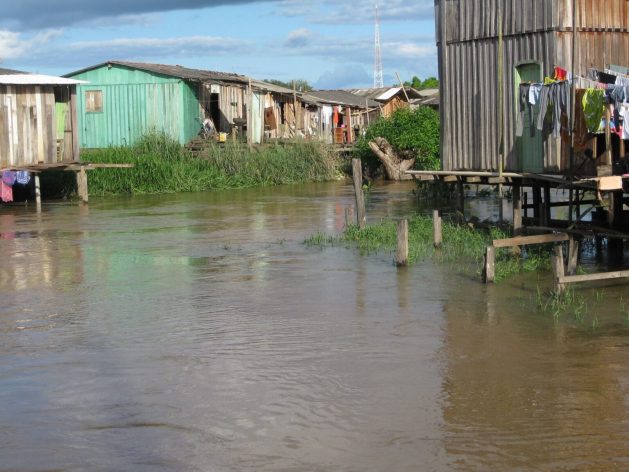 Many people living on the banks of rivers in the Amazon rainforest live in stilt houses over the water. Water into which garbage and other waste is dumped – the same water that is used for human consumption, with important consequences on their health, whose magnitude was underlined by the Covid pandemic. CREDIT: Mario Osava/IPS

RÍO DE JANEIRO, Oct 8 2021 (IPS) - Basic sanitation, a sector that is undervalued because, according to politicians, it does not bring in votes, has gained relevance in Brazil due to the pandemic that has hit the poor especially hard and the drought that threatens millions of people.

Brazil has made very little progress in sewerage construction in the last decade. In 2010, only 45.4 percent of the population had sewer service, a proportion that rose to 54.1 percent in 2019. Access to treated water increased from 81 to 83.7 percent in the same period.

During that time, however, hospitalisations due to waterborne diseases decreased by 54.7 percent, from 603,623 to 273,403, according to the study “Sanitation and Waterborne Diseases” by the Trata Brasil Institute, released on Oct. 5 in the city of São Paulo.

Among children under four, who represent 30 percent of the patients requiring hospital admission, the reduction was slightly more pronounced, 59.1 percent.

“The data make it clear that any improvement in the public’s access to drinking water, collection and treatment of wastewater results in great benefits to public health,” the Institute’s president, Édison Carlos, stated in the report.

Covid-19 has underscored the country’s social and economic inequalities by disproportionately affecting the poor, who for one thing are the least likely to have sewerage services.

This is reflected in the distribution of basic sanitation infrastructure by region in Brazil. In the North, only 12.3 percent of the population was served by a sewer system in 2019, the last year data was available from the governmental National Sanitation Information System (SNIS), which served as the basis for the study.

As a result, it is the region with the highest rate of hospitalisations, 22.9 per 10,000 inhabitants. It is also the region that concentrates the country’s most generous water resources, as it is located entirely in the Amazon basin.

But the presence of so many large rivers does not mean the local population has drinking water. In fact only a little more than half of the population has access to clean water.

The result is a high incidence of diarrhea, dengue fever, leptospirosis, schistosomiasis, malaria and yellow fever, all of which are waterborne diseases. One of the favelas or shantytowns of São Paulo, Brazil’s largest city, where local residents have turned a stream into an open-air garbage dump and a source of frequent flooding due to lack of sewage and garbage collection. Nor do favelas in Brazil’s cities have piped water. CREDIT: Mario Osava/IPS

At the other extreme, the Northeast region suffers from water scarcity in most of its semiarid territory. With only 28.3 percent of the local population served by sewer systems and 73.9 percent with access to treated water, it recorded 19.9 cases of hospitalisation per 10,000 inhabitants in 2019.

Part of the progress in sanitation in the region is due to the more than 1.2 million rainwater storage tanks that have been set up in rural areas by the Articulação do Semiárido (ASA), a network of 3,000 social organisations created in 1999.

But this time the hunger, violence and exodus to other regions triggered by similar calamities in the past did not occur.

A comparison of Brazil’s 26 states reveals more alarming disparities. The northeastern state of Maranhão, on the edge of the Amazon rainforest, registered 54.04 hospitalisations per 10,000 inhabitants, far higher than its Amazonian neighbour to the west, Pará, with 32.62.

“Maranhão faces huge challenges in sanitation, as does Pará, but it has higher population density, more people living close together and in contact with dirty water in the open air, for example. Its beaches, often polluted by irregular waste, are another factor to consider,” said Rubens Filho, head of communications at the Trata Brasil Institute and coordinator of its new study.

At the other end of the scale, Rio de Janeiro stands out with the lowest rate of hospitalisations, only 2.84 per 10,000 inhabitants, even though some of its low-income municipalities are among those with the poorest sanitation coverage.

“It is possible that some municipalities do not register cases of waterborne diseases or that people do not seek medical assistance,” Filho told IPS from São Paulo, in an attempt to put the low rate of hospitalisations into context.

“Above and beyond the differences between states, Brazil still has more than 270,000 hospitalisations for preventable diseases; these are costs that could be drastically reduced if everyone had sanitation coverage,” he stressed. Rainwater harvesting tanks are now part of the landscape in Brazil’s semiarid Northeast, thanks to recent initiatives to help people live with drought. There are some 200,000 tanks for irrigating crops, like those of farmer Abel Manto, and 1.2 million to store drinking water. CREDIT: Mario Osava/IPS

The North and Northeast are the poorest regions in the country, despite the enormous contrast in terms of their ecosystems – rainforest vs semiarid. They are both far from the goal of near universal sanitation in the country by 2033, set by a law – the Legal Framework for Sanitation – passed in 2020.

More precisely, the aim is to bring treated water to 99 percent of the population and sewerage to 90 percent in this enormous country of 213 million people.

The three regions least affected by the lack of such infrastructure, the Midwest, South and Southeast, are suffering this year from the effects of reduced rainfall, apparently due to climate change and no longer to occasional, short-lived droughts.

The low rainfall began in 2020 and since then has caused interruptions in the water supply in cities such as Curitiba, capital of the southern state of Paraná, and an increase in forest fires in the Pantanal, wetlands on the border with Bolivia and Paraguay, and in the southern Amazon jungle.

This year, many cities in the southeastern state of São Paulo began rationing water. In the state capital, São Paulo, and surrounding urban areas, the local sanitation company reduces the pressure in the pipes at night, a measure that prevents leaks but leaves some areas without water.

The fear is that there will be a repeat of the 2014 and 2015 water shortage crisis, which was similar to other shortages that have occurred this century. Twenty years ago a similar drought caused blackouts and ushered in energy rationing for nine months, starting in June 2001.

Brazil depends heavily on rivers for its electricity supply. Even though the proportion was much higher two decades ago, hydroelectric power plants still account for 63 percent of total installed generation capacity.

Reforestation and recovery of springs and headwaters have become part of the country’s sanitation and energy policy.

The frequency of droughts in south-central Brazil confirms the role of the lush Amazon rainforest in increasing rainfall in large areas of this country and neighbouring Argentina and Paraguay.

So-called “flying rivers” carry moisture from the Amazon to South America’s most productive agricultural lands and to watersheds that play a key role in the production of hydroelectricity. But deforestation of the world’s largest tropical forest is taking its toll. A view of the shantytown in São Bernardo do Campo, the hub of Brazil’s automobile industry, near São Paulo. A common sight in the poor neighbourhoods in Brazil’s cities: unpainted cinderblock houses are stacked on top of each other over streams, into which they dump their debris and garbage. CREDIT: Mario Osava/IPS

Covid-19 has highlighted the urgent need for sanitation. There is a consensus among epidemiologists that the lack of sanitation is one of the factors in the unequal spread and lethality of the coronavirus, to the detriment of the poor, by limiting access to proper hygiene as a preventive measure.

With 598,152 deaths recognised by the Ministry of Health up to Oct. 4, Brazil’s death toll is second only to that of the United States, which counts more than 703,000 deaths due to Covid. But in proportional terms, 280 Brazilians have died per 100,000 inhabitants, compared to 214 in the U.S., according to the Johns Hopkins University in Baltimore, Maryland., which keeps a global record on the pandemic.

The need for improved sanitation infrastructure is also gaining momentum for financial reasons. Brazil’s states, whose governments control the main sanitation companies, see privatisation as a source of revenue to overcome their fiscal imbalance and possibly give the sector a boost.

The 2020 Legal Framework for Sanitation encourages the concession of the service to the private sector as a way to attract investment and meet the goal of near universal coverage.

Companies in four Brazilian states have already been privatised. In Rio de Janeiro, on Apr. 30, 2021, the sanitation services of three of the four areas into which the state was divided will be handed over to private groups for 4.2 billion dollars, 133 percent more than expected.

The fourth area is to be privatised later this year. The 35-year concession requires larger investments than the sums paid for the operation of the services.

Cleaning up rivers, lakes and bays, expanding and repairing the pipeline network, improving water quality and reducing distribution losses, estimated at 41 percent, are tasks that will fall to the new owners.