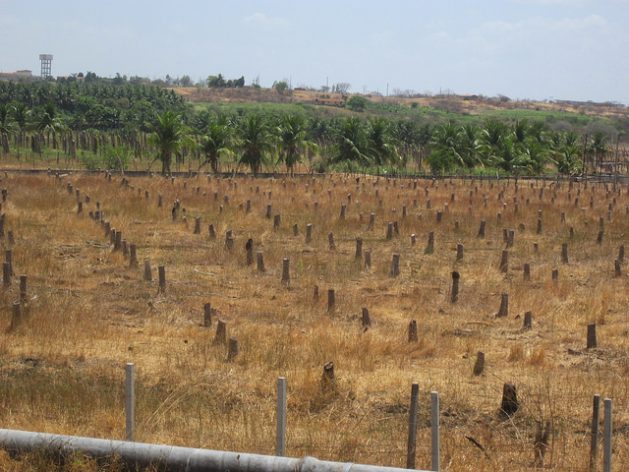 Stumps of coconut palms that died during the last drought in São Gonçalo, in the municipality of Sousa, in Northeast Brazil. In 2012, the water authorities suspended irrigation in order to ensure the supply of water for human consumption, due to the sharp fall of water in the reservoirs, which lasted for five more years. Credit: Mario Osava/IPS

SOUSA, Brazil , Nov 9 2018 (IPS) - Dozens of trucks used to leave São Gonçalo every day, carrying the local agricultural production, mainly coconuts, to markets throughout Brazil, including the cities of Rio de Janeiro and São Paulo, more than 2,000 kilometers away.

The prosperity of that district in Sousa, a municipality in the northeastern state of Paraíba that has some 70,000 inhabitants, ended in 2012, when the authorities suspended agricultural irrigation with water from the local reservoir, at the start of a six-year drought.

Coconut milk is widely consumed in Brazil, and the coconut milk from Sousa was popular due to its quality. But a single coconut palm consumes 200 liters of water a day, more than a person uses, which is a reckless use of water in Northeast Brazil’s semiarid climate subject to cyclical droughts.

Depending solely on coconuts led to bankruptcy for many farmers who adopted the crop as part of the São Gonçalo Irrigated Perimeter (PISG), launched in 1973 among 480 families who settled on plots of land between 4.3 to 16 hectares in size. 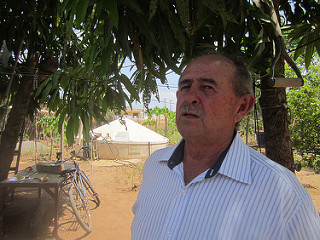 São Gonçalo, a district in the municipality of Sousa, in Brazil’s semiarid eco-region, has become a village of retirees due to the exodus of young people as a result of the collapse of irrigation agriculture, according to Francisco Honorato Filho, president of the Sousa Rural Workers Union. In the background is a tank that stores rainwater for drinking and cooking, one of one million such tanks in the region, which have eased the water shortage. Credit: Mario Osava/IPS

“The perimeter, which actually had 1,100 ‘irrigating’ families, more than twice as many as the legally settled ones, turned into a desert,” according to Francisco Honorato Filho, president of the municipality’s Rural Workers Union.

“Local agriculture employed 3,000 to 4,000 workers. With the drought that decimated the cattle herds and coconut palms, everyone left. There are still the old ‘irrigators’ who survive on their retirement pensions, but he unemployed young people joined the exodus,” the 72-year-old trade unionist told IPS.

The stumps of palm trees, burned in many cases, cover broad areas as testimony to the coconut milk boom of the past.

The paving of the 14.5-kilometer so-called Production Highway, which connects the city of Sousa to the district of São Gonçalo, was completed in 2014 to facilitate the transportation of crops that no longer existed.

The rural district of more than 7,000 inhabitants, divided into three main housing areas, emerged as a result of the construction, in the 1920s and 1930s, of the dam on the Piranhas River that supplies the city of Sousa, population 55,000.

With the drought that began in 2012 and ended last year, water for human consumption had to be prioritized, to the detriment of the PISG. For the first time in its 80 years, the reservoir practically dried up in 2016. Artesian wells and the diversion of water from another dam saved the city from collapse but the drought spelled disaster for the sole crops that farmers depended on in the rural areas of the municipality.

São Gonçalo also survived. Nearly 3,000 were drilled, but only a third turned out to have water, and much of it was salty, as is frequent in Brazil’s semiarid eco-region, an area of 1.1 million square kilometers where it rains no more than 800 millimeters a year on average.

Diversifying, planting vegetables and fruit, was a relatively successful alternative, observed José Bernardo da Silva, 68, who has been president of the community association for 27 years.

“The hope is that the rains will return and we can resume planting bananas, maize, beans and vegetable gardens, preferably seasonal crops, which allow us to 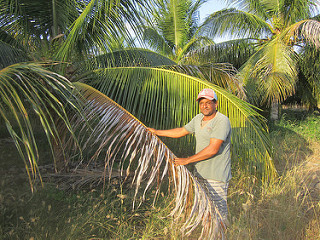 José Cardoso da Silva, a farmer who settled in the Varzea de Sousa district in Northeast Brazil, stands next to a few coconut palms that he managed to save from the recent six-year drought, which ended in 2017, thanks to a brackish water well he drilled on his land. He also diversified his production with vegetables and fruit trees. Credit: Mario Osava/IPS

adapt to dry periods” without total losses like coconuts, he told IPS.

Monoculture crops that depend on a lot of water, such as coconut palms and rice that was planted a lot at the beginning of the project, pose fatal risks at times of frequent drought.

Claudete da Silva, a 32-year-old mother of three, created with six partners a fruit pulp factory in a house adapted for the venture, whose net profit reaches 4,000 reais (1,080 dollars) per month.

Bureaucratic problems in obtaining health permits, due to insufficient municipal services, prevent an increase in production and income, the locally-born da Silva complained.

Much of the raw material they use is fruit harvested in the yards of neighbors, some native to the semiarid region such as cajá (Spondia macrocarpa and Spondia mombin).

In general they are fruits that, without commercial value or without sufficient production for sale in the city, rot in people’s yards, as they mature so quickly.

“Vegetables and fast-harvest crops are safer” in unstable climates, said Rogerio Junqueira, a 62-year-old agronomist who has dedicated 30 years to managing irrigation projects in the Northeast.

Since 2012, he has been the manager of another district, Varzea de Sousa, about 25 kilometers west of São Gonçalo, where the drama repeats itself, but not so drastically. 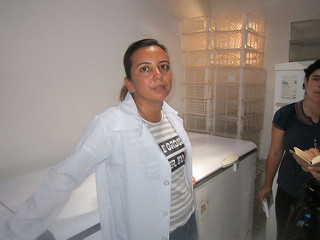 Claudete da Silva stands next the freezers where she stores the fruit pulp she uses in the factory she founded with six partners as an alternative to drought-affected agricultural production, in Varzea de Sousa, a district of the Sousa municipality, in the state of Paraíba, in Brazil’s semiarid Northeast. Credit: Mario Osava/IPS

A different water system, supplied by another reservoir, less affected by drought, and by means of pipes, allows it to maintain the water supply, although reduced to three days a week: Mondays, Wednesdays and Fridays.

São Gonçalo was supplied by open channels that generate more losses and are more difficult to control. But they are not likely to be revived.

Varzea de Sousa, created in 2006, managed to maintain strong production during the first three years of the drought, but in 2015 the output was cut in half and then almost to one-third a year later, according to Junqueira.

The project includes three large business estates, of 113 to 1,025 hectares, dedicated to soybeans, maize and organic food, and 178 five-hectare areas destined for family farmers, where coconuts were the main crop, “now 90 percent lost,” said the manager.

“I started growing green vegetables out of necessity,” after the losses in coconuts, 52-year-old small farmer José Cardoso da Silva told IPS. He was also lucky enough to drill a very productive well, whose “very alkaline” water was used to “keep some coconut palms alive” and to plant fruit trees and beans.

Diversification and the little water received from the network of pipes helped keep local farmers afloat. For potable water, about 20 percent of them have tanks to store rainwater, used by more than a million families in Brazil’s semiarid Northeast.

Farmers in both Varzea de Sousa and São Gonçalo now hope that the diversion of the São Francisco River, the major river that crosses the southeast part of the semiarid region, will restore the capacity of the reservoirs that provide irrigation.

Canals, tunnels, adductor stations and reservoirs make up the Northern Axis of the river diversion project, which will reinforce the São Gonçalo reservoir and other reservoirs that will make the Piranhas River a year-round source of water, benefiting numerous municipalities. 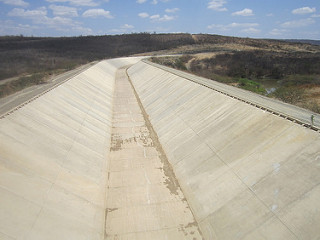 A view of the as-yet unfilled channel of the São Francisco River diversion project, which is aimed at making the Piranhas River a year-round source of water to supply many towns and cities in Brazilian semiarid Northeast. The project, which was initially scheduled to be finished in 2010, has not yet been completed. Credit: Mario Osava/IPS

“It resolves the current shortage, but a definitive solution requires including the Tocantins River,” Fabio Tayrone, the mayor of Sousa, told IPS, referring to the idea of bringing to the semiarid Northeast water from the river that runs across central Brazil to the northern part of the Amazon rainforest.

In addition, the postponement of the river diversion project “left almost irrecoverable damages,” he said, since the water was not available when it was most

needed, during the 2012-2017 drought. And it is not yet clear when the project will be completed.

In any case, the longest dry period in its history did not cause the same tragedies in the semiarid Northeast as occurred during previous periods of drought, most recently between 1979-1983, 1990-1993, 1997-1998 and 2001, when thousands of people died, looting broke out in towns and cities, and a massive human exodus occurred.

Rainwater storage tanks and social policies, such as pensions for rural workers and the Bolsa Familia subsidy for poor households, make it possible for people to coexist with droughts, even though they are more frequent now than in the past.