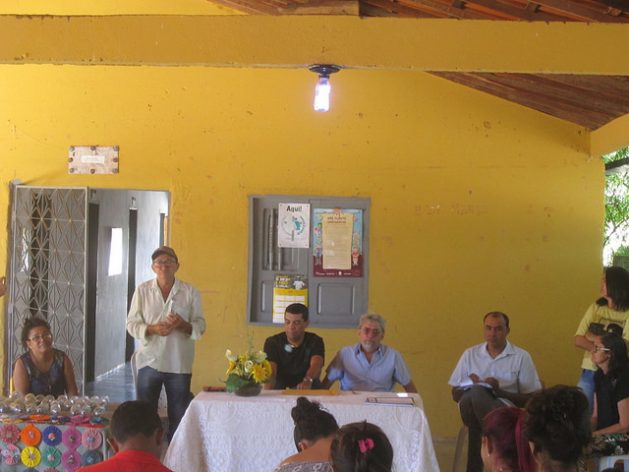 Diploma award ceremony for the 28 teenagers who completed the course on making LED lamps in a small farmers' association in Aparecida. The lamp on the ceiling is made at the "school factory" where young people study and work in the municipality of Sousa, in the northeast of Brazil. Credit: Mario Osava/IPS

SOUSA, Brazil, Aug 21 2018 (IPS) - “We want to make history,” agreed the teachers at the Chiquinho Cartaxo Comprehensive Technical Citizen School. They are the first to teach adolescents about generating power from bad weather in the semi-arid Northeast region of Brazil.

The Renewable Energies course was the most popular one in the secondary education institution that began its classes in February this year in Sousa, a city in the interior of Paraiba, a state in Brazil’s semi-arid ecoregion.

Sixty of the 89 students chose that subject. The rest opted for the other alternative, marketing strategies, in the school named after a local engineer and entrepreneur who died in 2006.

“It was the local community that decided, in a public hearing, that these would be the two courses offered at the school,” 35-year-old Cícero Fernandes, a member of the school’s staff, told IPS.

“It’s about building a life project with the students. Renewable energies use different resources, but solar power is the predominant one here and is the focus of the course, because we have a lot of sunshine,” said Kelly de Sousa, who is the school’s principal at the age of 30.

The interest of the teenagers, most of them between 15 and 17 years old, reflects the solar energy boom they have been experiencing since last year in and around Sousa, a region considered the one with the most solar radiation in Brazil. The local Catholic church, businesses, factories and houses are already turning to this alternative source.

Energy, specifically electricity, is no longer something foreign, distant, that comes through cables and poles, at prices that rise for unknown reasons.

The municipality of Sousa, with more than 100 photovoltaic systems and a population of 70,000, 80 percent urban, is in the vanguard of the change in the relationship between society and energy that it is promoting in Brazil the expansion of so-called distributed generation, led by consumers themselves.

The share of photovoltaic generation in Brazil’s energy mix is still a mere 0.82 percent of the total of 159,970 MW, according to the government’s National Electric Energy Agency (Aneel), the regulatory agency. Students in one of the classrooms of the Chiquinho Cartaxo Comprehensive Technical Citizen School, in the city of Sousa, where 60 students learn techniques and theories about renewable energies, especially solar power. The course was adopted after consultation with the local community at public hearings in this town in northeastern Brazil. Credit: Mario Osava/IPS

But it is the fastest growing source. In the plants still under construction, it already accounts for 8.26 percent of the total. This refers to power plants built by suppliers.

Added to these are the “consumer units of distributed generation” as Aneel calls them, residential or business micro-generators which now total 34,282, of which 99.4 percent are solar and the rest are wind, thermal or hydraulic. The total power generated is 415 MW – three times more than 12 months ago.

The Northeast, the poorest and sunniest region, still generates little solar energy, in contrast to wind power, which is already the main local source, consolidated after drought made the water supply drop over the last six years.

The acceleration of the solar revolution in Sousa has been driven by civil society, especially the Semi-Arid Renewable Energy Committee (Cersa), a network of activists, researchers, and social and academic organisations created in 2014.

This unincorporated organisation with no formal headquarters operates in three areas, as its coordinator, 60-year-old Cesar Nóbrega, who lives in Sousa, told IPS: community training and empowerment, installation of pilot project systems and lobbying for public policies on renewable energy. Genival Lopes dos Santos stands in the garden he cultivates together with his wife thanks to a solar water pump. With this system and other technologies adopted on their farm, they were able to continue to plant crops during the six-year drought in Brazil’s semi-arid Northeast, which began in 2012. Credit: Mario Osava/IPS

The technical school of Sousa proves that Cersa’s preaching fell on fertile ground. Other activities organised by the committee include short courses, seminars, and forums with the participation of university students, government officials and community organisations.

“I want to know how the panels absorb sunlight and generate energy, and that course was what I was hoping for,” said Mariana Nascimento, 16, who attends the school with her twin sister Marina. They live in the city of Aparecida, 20 km from Sousa.

The course drew not only young people. Emanuel Gomes, 47, decided to return to school to “learn to design residential (solar) projects, save energy costs and protect the environment.” He attends class together with his 18-year-old son.

“The students are enthusiastic, thirsty for knowledge and eager for practice,” and they proved it by participating in the seminar by the Solar Parish during their holidays, said the school principal Sousa, referring to the debate that took place at the inauguration of the solar power plant in Sousa’s Catholic church on Jul. 6.

Engaging and training students on energy and its environmental and economic effects is a task taken on by Walmeran Trindade a teacher of electrical engineering at the Federal Institute of Paraíba and technical coordinator of Cersa.

On Jul. 17, 28 students graduated from his 30-hour course at the “school factory” of LED lamps, examples of energy efficiency, in a rural town near Aparecida, supported by the Catholic Breda Institute.

“It is for professional training, income generation and promoting coexistence with the semi-arid climate,” the teacher told IPS. He travels more than 400 km from João Pessoa, the capital of Paraiba, to teach classes pro bono.

The lamps, made from plastic bottles, give off less light than mass-produced lamps, but are sold for just five reais (1.30 dollars), making them affordable to poor farmers. And they are made by “young people who are also poor,” and thus earn some income, he said.

“I made four lamps, I learned how it works and I want to work with energy, although I dream of studying law to defend society,” said 16-year-old Gaudencio da Silva, a second year high school student who participates in the “School Factory.” Marlene and Genival Lopes dos Santos, a farming couple, stand next to the biodigester they obtained as part of the campaign for clean energy in the municipality of Sousa, in the northeast of Brazil. In addition to biogas, the biodigester also provides them with natural fertilisers for their orchard and garden. Credit: Mario Osava/IPS

In addition to the Solar Parish church, the Oliveiras Community Bakery and urban and rural solar systems are positive examples of the sun as an environmentally sound source that empowers consumers and communities.

The Farmers’ Association of the Acauã Settlement, which emerged under the 1996 land reform, now has a solar plant that ensures the supply of water to its 120 families. The energy pumps water to a reservoir on a hill 800 m from the community.

“We were paying 2,000 Brazilian reais (540 dollars) a month in electricity to pump water to a tank on a hill 800 m from the community,” Maria do Socorro Gouveia, the head of the Farmers’ Association, told IPS.

Another rural example of the use of solar power is the farming couple Genival and Marlene Lopes dos Santos, both 48 years old, who were also settled on land of their own thanks to the agrarian reform. In addition to generating electricity, they use solar energy to pump water from a well and irrigate small orchards and their garden.

A biodigester, another system that is spreading in the rural part of the municipality of Sousa, provides them with cooking gas. And they fertilise their crops with manure processed to produce biogas.

“The drought didn’t stop us from planting our crops,” the farmers, who are also engaged in fishing and beekeeping, said proudly.

“There is a need for the public sector” to promote public policies in these alternative energy sources, said Nóbrega. The municipality of Sousa spends six million reais (1.6 million dollars) a year on electricity.

Adopting solar energy in public offices and street lighting would represent a great saving in terms of spending on municipal services and infrastructure and, as a result, the money paid to the electricity distributor, based in the capital João Pessoa, would give a boost to the local economy, argued the coordinator of Cersa.