NUEVA IMPERIAL, Chile, Jan 26 2008 (IPS) - A conventional hospital and a Mapuche medical centre, run by traditional healers who examine urine and prescribe infusions, coexist at the Intercultural Health Complex in the southern Chilean region of Araucanía. 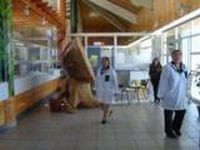 María Lefio, 66, walks with difficulty due to osteoarthritis in both knees, diagnosed six years ago in a public clinic. Her only relief was analgesic medications.

But the pills “didn’t do anything for me anymore,” she tells Tierramérica in the waiting room of the Mapuche medical centre, located in Nueva Imperial, 670 km south of Santiago.

This is the third time that Lefio is going to get the “lawen” (“remedy” in the Mapuche language Mapuzungun) that one of the centre’s 14 “machis” (healers) prescribed. It is a brown infusion of herbs distributed in two bottles made of clear plastic.

“Since I’ve been taking the lawen I have felt better. I no longer use a cane,” says Lefio, who is of Mapuche origin but had not sought the help of a machi until recently.

“In my community there are no machis (nearly always women). They all died, and the tradition was lost,” explains Lefio, mother of six children.

The machis and the “ngütamchefe” (bone setter) attend here Monday through Saturday, from 8:00am to 5:00pm, and they themselves collect the herbs and prepare the infusions, in exchange for a small payment from the Newentuleaiñ Indigenous Association, which runs the centre. Also participating are 11 “lonkos” (chiefs) who give workshops on cultural dissemination.

The patients, or “kutranches”, must meet four requirements in order to receive treatment free of cost: they must show their identity card, be registered in the National Health Fund, fill out an informed consent card, and bring in a sample of their first urine of the day. Nevertheless, the machis can sometimes provide a “distance diagnosis” based on examining clothing worn by the ill person.

According to 2006 data, the Mapuche community comprises 922,833 people who represent 87.2 percent of indigenous Chileans. Nearly 30 percent reside in Araucanía.

The Complex was inaugurated in August 2006 by President Michelle Bachelet. On one side of the site a new conventional medicine regional hospital is being built, and is to serve eight communities. On the other is the indigenous centre.

Its promoters were Mapuche leaders from Nueva Imperial, who worked for more than a decade to create spaces for indigenous medicine in the health system.

Through a renewable annual agreement, the government’s Southern Araucanía Health Service provides the centre with the financial resources to operate. The building was provided by the state.

A GIFT FOR HEALING

The machis inherit their skill in healing others from their ancestors. According to the Mapuche cosmovision, illness occurs when a person has done something bad or feels fear. The role of the healers is to re-establish balance between the body, mind and spirit.

Juana Licanqueo, a machi, tells Tierramérica that before accepting the proposal to work at the centre she first consulted her god, Nguenechen.

Although she likes to cure people, she nearly abandoned the project. One day she didn’t feel well and didn’t want to get out of bed. She thought her god was punishing her. But she improved and returned to the centre to help the more than 60 patients who seek help every day.

“We limit the number because this project was created for the rural Mapuches, those who don’t have resources,” says Doraliza Millalen, president of the Association. But they also attend to urban Mapuches and non-Indians, who they refer to as “Chileans”.

“If we opened the door to the Chileans, there wouldn’t be space for the Mapuche people,” Millalen says, laughing.

Carmen Riffo, 50, arrived at the indigenous medical centre after a decade of treatment for depression in Chile’s public hospitals.

Riffo, who is not indigenous, has visions, faints and lacks energy in general. Five years ago she sought the help of a machi, who told her she had been the victim of “witchcraft”. She began treatment but couldn’t keep up with the payments. Today she is treated at the centre free of cost and says she feels better, especially because she feels understood.

Although they are side by side, the conventional hospital and the Mapuche centre are far from acting as partners, especially when it comes to medicine. So far, the leaders of both have only drafted a form for referrals.

The machis continually recommend that their patients with grave illnesses seek treatment at the other hospital, but only one doctor there has sent patients to the Mapuche centre. No surgeries or births take place at the indigenous hospital, although it does have a hospitalisation wing (“amukon”).

“Construction of this centre took a decade. It could be another 10 years before we can interact more fluidly,” says Millalen.

The first year was not easy. Without a legal framework that recognises indigenous medicine as valid, they have to adjust to the existing administrative and labour standards like any private entity, which sometimes clashes with their customs, she adds.

This has led to creative ways of complying with the law. For example, the machis will not agree to be hired or to hand in receipts of their fees. They only agreed to sign a letter of commitment to provide services.

Juana Calluil, director of the centre, believes more effort is spent in finding ways to deal with such obstacles than in developing the full force of Mapuche medicine.

They have also faced rejection from some Mapuches. “The poverty in which they live is so great, the desperation so deep, that many indigenous people want to run this place themselves. There are 100 people who are making a living on this agreement,” explains Millalen.

In 1996, the Health Ministry began a special programme to attend to the needs of the nine indigenous ethnicities recognised by the government, and in 2002 created a Health and Indigenous Peoples Unit that has promoted initiatives in different medical services.

The project under way in Nueva Imperial is the most far-reaching.

“We are still in a period of evaluations, but we have had a good reception among the indigenous population, who can’t always pay what the machis charge in their communities,” says Cecilia Moya, an official with the Unit.

But she sees difficulties, like the shortage of herbs needed to make the lawen due to the industrial plantations of pines and exotic eucalyptus, the construction of infrastructure and spraying of pesticides.

The director of the governmental National Corporation of Indigenous Development, Wilson Reyes, of the Atacameña ethnicity, told Tierramérica that the government is working on legal initiatives for recognition of the health of the country’s original peoples.

But Millalen calls on the State to recognise, constitutionally, all indigenous peoples.

Despite the growing dissemination of Mapuche medicine, Moya perceives a great fear in the communities that their ways of curing the ill will be institutionalised. “They believe their tradition will become less natural. They have already lost so much,” she adds.