LIMA, May 30 2008 (IPS) - It was not hard to find the remains of the victims, some of whose bones were actually exposed to the elements. But it took 24 years for the people of the highlands village of Putis in southern Peru to get a response to their insistent requests for exhumation and identification of the remains. 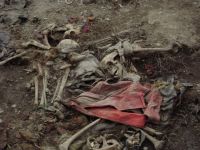 In 1984, 125 men, women and children were shot to death by army troops after being tricked into digging their own mass grave.

The biggest single massacre of civilians in Peru’s 1980-2000 civil war is just now coming to light, thanks to the unflagging efforts of the victims’ families.

Since May 17, 60 bodies have been found, including those of 10 children between the ages of six and 10.

On a visit to the area in November 2006, this reporter found that the relatives were going from one public agency to another, asking them to exhume the victims of the massacre of Putis, located in the district of Santillana in the southern province of Ayacucho.

The death toll for Peru’s two decade armed conflict was put at 70,000 by the independent Truth and Reconciliation Commission (CVR). But in order to qualify for the reparations provided for by law, victims’ families must prove that their loved ones were murdered by the guerrillas, the army or paramilitary groups.

In 2006, IPS spoke to Gerardo Fernández, one of the survivors. Desperate because the victims were merely ignored and forgotten by the authorities, he began to draw up a list of people who were killed or “disappeared”, including his mother and his three-year-old son.

Fernández was one of the local residents who helped the forensic team locate the unmarked mass grave this month.

“The excavation in Putis is a very special case, because of the humanitarian aspect: no one listened to the locals, who are mainly (indigenous) Quechua speakers. The exhumations are not even being carried out by a state body, but by civil society – the Peruvian Forensic Anthropology Team (EPAF),” said the head of the non-governmental Peace and Hope Association, Norberto Lamilla, who is coordinating the work.

“It is the Institute of Forensic Medicine (IML) that should be carrying out this task,” said Lamilla, whose group works with the families of victims of the civil war. “But, due to the lack of cooperation and the IML’s refusal to do it, we had to turn to EPAF.”

“The IML said they did not have the funds or the time, and in the end they came out with the pretext that it was a distant, dangerous area and that they needed an intelligence report before they could travel. They didn’t care that it was the biggest mass grave in memory,” he said.

“The remains were visible, and with the passage of time, they had begun to be lost and destroyed,” said Lamilla.

“The local peasant farmers needed closure to their mourning, and needed to identify the bodies of their relatives and give them a Christian burial. But to see the bones just exposed to the elements, while the state did nothing, affected them psychologically,” he said.

The Putis massacre is described in the CVR’s 2003 report, which recommended that the bodies be exhumed and that the killings be investigated and the perpetrators brought to justice.

The only thing known about the military operation is that it was led by officers with the aliases “Captain Baretta”, “Commander Óscar” and “Lieutenant Lalo”. (Officers involved in the counterinsurgency war did not go by their real names). At the time, the military chief in Ayacucho was General Wilfredo Mori Orzo.

The victims, who were villagers fleeing the Maoist Sendero Luminoso (Shining Path) guerrillas, were lured to Putis by the army with false promises of protection, forced to dig a ditch, and later shot by the troops in December 1984, says the CVR report.

“In 1984, there was an upsurge in subversive activity. The highlands of Santillana had become an area where Sendero Luminoso had an active presence, with the guerrillas constantly entering the area and seeking support among the peasants, and urging them to participate in their armed struggle. Given that situation, a military base was installed in Putis, which began to operate in November 1984,” says the report.

The massacre occurred the following month.

The army accused the villagers of supporting Sendero. But locals actually lived in fear of the insurgents because they regularly killed people who refused to join their group or who they accused of collaborating with the military.

Facing harassment on all sides, many villagers fled their homes and took refuge in other hamlets and villages, or lived in hiding in the hills. But the army convinced them to go to Putis, where they would supposedly be under military protection.

“The army suggested that they take up residence below the village, saying they would thus enjoy better protection from subversion. But actually, in the eyes of the military, many of them were suspected of cooperating with the subversives,” the report says.

“Tired of living in the hills and being caught in the crossfire, harassed by the subversives on one hand and by the security forces on the other, the villagers accepted the proposal and moved to Putis, bringing with them all of their belongings.

“The security forces received the villagers and gathered them together in the school, along with local residents that the soldiers had called out of their homes. The military told them that as of that moment they would give them protection and help them in different projects to improve their quality of life,” the report continues.

“Under that pretext, the military ordered all of the men, at gunpoint, to dig a large ditch; some were told it was for building a fish farm, to raise trout, while others were told that houses would be built there.”

“When the supposed fishpond was ready, the troops brought together the roughly 100 villagers around the pit, including men, women and children, and without further explanation, shot them to death,” it adds.

The troops then seized and sold the victims’ farm animals. To cover up the murders, they leaked to the press an account of a supposed armed confrontation in which 15 “guerrillas” were killed.

During the exhumation, the EPAF forensic experts have found bullets and casings of the kind used by military rifles.

In 2003, the CVR asked the Defence Ministry and the army for the list of officers who were posted in the area in 1984. The response was that such information was not available.

“From witness testimony, we know the killings were committed by army troops from a counterinsurgency base that was set up for a period of two or three years in Putis, and that answered to the garrisons in San José de Secce, in Santillana, and in Castropampa, in Huanta, which in turn answered to the Political Military Command in Huamanga, Ayacucho,” said Lamilla.

General Mori Orzo was named head of the Political Military Command in Ayacucho in August 1984. “We are in the process of tracing the chain of command, in order to establish which officers were responsible,” said the activist.

The head of the Ayacucho human rights prosecutors’ office, Rubén López, is in Putis overseeing the excavation work, which is complicated because the grave is in a remote, difficult to access area. The first day alone, they found the remains of 25 different people, along with 15 shell casings.

The relatives are helping identify the bodies by their clothing, jewelry, shoes or other personal objects.

“The poverty in Putis is extreme,” said Lamilla. “These people don’t even have enough to eat and obviously can’t afford a coffin, so we are calling on everyone who is interested to help them bury their loved ones.”

“In Putis, they killed entire families: the Condona Quispe, the Centeno Chávez, the Gamboa Ccente, the Madueño Curoi, and the Condoray Huallasco families,” Fernández had told IPS in Santillana, back in 2006. “Who is going to stand up for them if they are all dead?”