WOMEN-MEDIA: Stuck at the Starting Gate

ROME, Jun 9 2008 (IPS) - "We should not be all that surprised that we are stalled," says Jane Ransom, executive director of the International Women's Media Foundation (IWMF), referring to the absence of women leaders in media organisations. 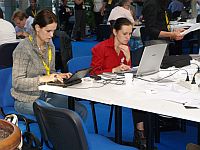 Two journalists at the recent FAO summit in Rome. Only one-third of the journalists working in Italian newsrooms are women. Credit: Sabina Zaccaro/IPS

"We have a few generations of educated, free women," she notes, but this must be considered in the context of many preceding generations in which women were barred from journalism. "Men still control most of the media, and most cultural, financial, and political structures are still male-dominated," she says.

According to the report "Women Make the News 2008", published by the U.N. Educational, Scientific and Cultural Organisation, "Progress of women journalists' careers is still hampered by lingering stereotypes and subtle discrimination. Women journalists continue to face substantial obstacles to full participation in the newsroom – particularly in terms of management opportunities."

This "patriarchal ideology" seems ubiquitous and culture-blind in the media sectors of many countries.

Editor of South Africa's Mail & Guardian, Ferial Haffajee, says that a 2006 "Glass Ceiling Study" published by the National Editors Forum and the NGO Genderlinks found that "the larger media contingent in South Africa lags behind, that the number of women in senior positions is not near equality, and that women felt themselves to still inhabit patriarchal workplaces."

It seems that women's access to universities and newsrooms is more or less equal, but at some point, their progress stops. Do women "opt out" or are they "pushed out"?

"Women are pushed out because of unfriendly, child-unfriendly working hours," says Haffajee. "Owners haven't created crèches or made job arrangements which allow women to thrive and climb. Journalism is a hard slog. Stories happen at inconvenient times, deadline is way beyond normal societal hours, maternity leave provisions are poor. The lack of paid maternity leave, and the unsociable hours of journalism really emerged as huge push-factors."

Ransom concurs. "My observation is that women in the news media have some extra special challenges," she told IPS. "Compared to women in some other key professions, such as law and finance, I think women journalists receive less institutional support addressing career advancement, work-life balance, and skills training."

"(The information) is fragmentary and comparisons are difficult. But the overall picture painted by the studies we are aware of is troubling, with women's professional marginalisation a strong thread running through the findings in both the developing and developed countries," she adds.

"We hear a lot about this from women journalists throughout the world. A key point we hear is that news organisations are not very family friendly," Ransom says. "Women journalists feel forced to choose between work and family. For example, the IWMF held a leadership institute for women journalists from the former Soviet republics just last month. The participants were clear that you can't move up in the news media if you have children."

Nevertheless, Haffajee points out that there has been a wave of appointments of women editors across Africa, and some reason for optimism.

At the Mail & Guardian, she says, "The visage of the editor had always been male… The political context of my country assisted enormously: the ANC (African National Congress) has made a mission of non-sexism. It is a cornerstone of our Constitution and the ruling party has pushed hard for women to take their places in politics and in the private sector… So, that context allowed the net to be widened when my predecessor Mondli Makhanya left."

"Since my appointment, several women have become editors, like Phyllicia Oppelt at the Daily Dispatch; Zingisa Mkhuma at the Pretoria News; Lizeka Mda as deputy at the City Press. Women run radio stations. Debra Patta is editor-in-chief of the biggest private television station," Haffajee says. "I have met some phenomenal women who manage their own agencies or run their own newspapers like Pat Mwase and Zarina Geloo in Zambia, Rosemary Okello in Kenya, along with Lucy Oriang."

IWMF is in the planning stages of a global report on women in the media. But Ransom remains sceptical. "I am hopeful that we'll find some areas of progress that we can build upon… (But) I would not be surprised if the trends show stalled progress in some important areas, too," she concludes.

*This is the second of a two-part report on women in media, written in cooperation with Aldo Ciummo in Rome. Miren Gutierrez is IPS Editor in Chief.