TRIPOLI, Jul 3 2008 (IPS) - An eerie calm reigns over the new demarcation lines drawn in northern Tripoli, the second largest city in Lebanon, which gets its name from the Greek 'tri-polis', or 'three cities'. One week after violent combat erupted between the Alawite minority from the Jabal Mohsen area and the Sunni community of Bab el-Tebbaneh – separated by the wide Syria Street – tensions still run high. 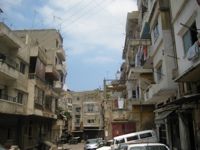 On Sunday, Jun. 22, the inhabitants of Bab el-Tebbaneh and the neighbouring Jabal Mohsen awoke to the sound of staccato gunfire and rocket blasts echoing in the night. The fighting continued intermittently until the early hours of Monday, Jun. 30, resulting in nine casualties and more than 45 injured.

Dissension between Alawites and Sunnis in Tripoli dates back to the early eighties. Both communities have lived in the century-old city, sprawling with mandate houses of sandstone and fragile arches, in luxury high rises along the avenues leading to the old port as well as in the rundown areas of Bab el-Tebbaneh and Jabal Mohsen.

The Alawite community, which originates from Syria, grew in number in the eighties under the patronage of Rifaat al-Assad, the uncle of Bashar el-Assad, Syria's president. The ShiA Islamic sect, a ruling elite in Damascus, currently holds two seats in Lebanon's parliament.

"Tripoli's Sunni alignment in the eighties to Yasser Arafat's PLO (Palestinian Liberation Organisation) created a rift among the communities, with the Alawites reverting to their natural ally, Syria. This led to the 1986 massacres, when more than 300 Sunni people in Tripoli were killed at the hands of the Syrians," says Moustapaha Allouch, MP from the Future movement, a leading political force in the northern city and part of the anti-Syrian governing majority coalition. Since that time, the Alawites have been viewed by many in town with suspicion and animosity.

Old habits die hard. Nearly 20 years after the infamous events in the eighties, both communities distrust each other and remain on the defensive. In such a context, any faction can easily manipulate old sectarian anxieties and ancient feuds, with a growing number of people haunted by the potential re-enactment of the massacres.

In the city's poorer quarters, where both communities have been segregated from one another, frictions are more palpable. The recent one-week civil war, initiated on May 7 by opposition movements including Shia Hezbollah and Amal parties as well as the Syrian Socialist National Party (SSNP), further fuelled tensions between Sunnis (pro-majority) and Alawites.

"The small Salafist community (a radical faction of Sunni Islam that believes in a stricter interpretation of the Quran) has been denouncing of late the moderate approach adopted by the Future movement," says Allouch.

Rifaat Eid, son of Alawite former MP Ali Eid, a member of the pro-Syrian opposition, believes that the radical Sunni faction has been further slipping away from the Future movement's control. "This can be witnessed in the recent speeches held by Sunni figures, such as Salafist preacher Dai el-Islam," says Eid, referring to the radical cleric's recent declaration that Sunni Muslims have the right to use "legitimate defence" to ward off potential attacks.

Around the shanty towns near Syria Street, dilapidated buildings with bullet-ridden walls bear witness to past wars and more recent conflicts. A few metres away, the charred walls of another structure are a testimonial to the intensity of recent attacks.

"I am ashamed of what has been taking place in my hometown. I don't recognise my neighbours or my friends – their attitudes have been increasingly dictated by sectarian feelings," says a Sunni inhabitant of the area. "People have been setting fire to homes of Alawites," he adds, pointing to a burnt building.

On the other side of the divide, the same accusations are intensifying, especially since the explosion that shook Bab el-Tebbaneh Saturday and caused the death of Mohamad Allouch and injured 20 others. Tripoli's mufti Sheikh Malek Chaar accused "foreign elements" of stirring problems in the city.

General Ashraf Riffi, director of internal security forces, visited the city last week and stated to the press that "we will not tolerate any security breaches and will severely punish any armed individuals." But he added that the disarmament of both factions could only be achieved through a political agreement, and until one is reached, security forces would not attempt to confiscate arms caches belonging to either group.

The fierce fighting that occurred in previous weeks has proven Tripoli's vulnerability to the growing security threats that are plaguing the country. Tripoli is a long way from living up to its ancient name of 'three cities' that are able to peacefully co-exist.