PESHAWAR, Aug 6 2008 (IPS) - The polio eradication campaign has ground to a halt in the Swat Valley, in northern Pakistan, with the breakdown of a peace agreement with a hardline militant group. 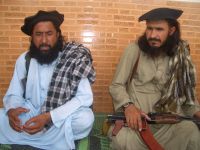 In fact, violence has escalated in recent weeks in the entire North Western Frontier Province (NWFP), except the Peshawar Valley, and the Federally Administered Tribal Areas (FATA) with the Pakistan Taliban (Islamic fighters) tightening control of the border region and now threatening to attack the southern port city of Karachi.

On Tuesday, Maulana Faqir Mohammad, the central vice-chief of the Tehrik-i-Taliban (TTP) and Maulvi Mohammad Omar, the spokesman, told a joint press conference in Anayat Kalley, some 8 kms from Khar, the headquarters of Bajaur Agency in FATA, that a suicide squad would be unleashed unless the government stops the military operations in Swat, NWFP.

Four new cases of polio have been reported from Swat, the northernmost district of NWFP. The oral polio vaccine (OPV) campaign was resumed after more than a year in end-June following a peace agreement between the provincial government and the TTP.

However, on Jul. 28, the first day of a second round of immunisation since June , at least 10 health workers were severely beaten up in the Hazara locality of Matta, confirmed Shaukat Ali, the district coordination officer.

He told IPS in a telephone interview that the boxes in which they were carrying the vaccine were broken, and their documents torn by supporters of Maulana Fazlullah, an Islamic cleric-turned-leader of the Swat Taliban.

The campaign has again been suspended, and a curfew clamped by district authorities.

The peace deal in Swat and Malakand was brokered on May 21 by the NWFP government, after several rounds of negotiations. In clause 9 of the agreement the TTP agreed to support the oral polio programme in Swat. Pakistan is one of only five countries in the world – including neighbouring India and Afghanistan – where the polio virus still exists.

The TTP kept their word in the first round of immunisations, from Jun. 10 to 12. More than 250,000 children under five years were administered the OPV in Swat, many of them for the first time. Health workers stayed away from nine areas including Matta because of security concerns.

According to Dr Waheed Khan, the top polio officer in the NWFP, this time 41 of the 65 union councils in Swat were partly covered. Health workers were again not allowed entry into nine union councils, he said.

Eight-month-old Wajeeha Bibi is from Matta, where vaccinators were roughed up and turned away. On Jul. 21, she tested positive for polio at the National Institute of Health, Islamabad.

“Doctors have said that the paralysis will stay for life,” said her heartbroken father Mujahid Shah, a petty shopkeeper. “I wanted to administer OPV to my daughter but I feared Taliban reprisal. I knew this much that the vaccination was good,” he told IPS at the Paraplegic Centre in Peshawar where he has brought his daughter.

Maulana Fazlullah, the group’s charismatic leader, had deemed the immunisation campaign a U.S. conspiracy to make people impotent and infertile, vituperative propaganda that he unleashed over his popular FM channel

“The virus detected in them is P1 (a highly virulent strain), which has put the lives of children in the nearby villages at a razor’s edge,” warned Dr Khan, the chief polio official. Children have not been immunised against polio for two years in parts of this troubled border area including Matta.

According to figures issued by the World Health Organisation (WHO), by Aug. 1, 896 polio cases were reported worldwide as against 1,315 during the corresponding period last year. Pakistan with 22 cases is among the top four endemic countries, including India (331), Nigeria (483) and Afghanistan (13).

Two polio cases were detected in Bajaur Agency on the border with Afghanistan on Jul. 22 and Aug. 3 respectively.

“Parents have never been barred from administering OPV to their children,” the Swat Taliban spokesman, Maulvi Omar, said over the phone.

Muslim Khan, spokesman for the TTP in Bajaur, told IPS, “We support the campaign wholeheartedly and won’t ask any body to refuse vaccination of their children.” He insisted that it was the government-imposed curfew that has stopped the polio drive and not the Taliban.

In Bajaur Agency, one-year-old Fatima Bibi tested positive on Aug. 3 in Nawagai locality where 5,200 children had been without OPV for two years. The first case of polio in the area was 16-month-old Mehran Khan who was detected on Jul. 22.

The federal health authorities had to suspend the OPV campaign in Bajaur Agency in August last year after armed men beat up the vaccinators in the Charmang area. On May 25, 2007, FATA’s chief surgeon, Mohammad Habibullah was killed in a roadside blast while coming from a polio-related meeting in Bajaur Agency.