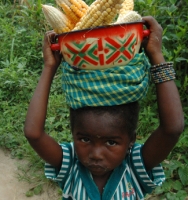 Support for smallholder farmers could be crucial for improving food security. Credit: IRIN

This was the declaration made by 200 international delegates – including farmers, researchers, private sector representatives, media and policy makers – who gathered in the Malawian capital, Lilongwe, from Sep. 2 to 5 for the annual policy dialogue hosted by the Food, Agriculture and Natural Resources Policy Analysis Network (FANRPAN).

The current global food crisis is the focus of the United Nations General Assembly meeting which opened in New York this week with the theme, ‘Impact of the Global food crisis on poverty and hunger in the world’.

According to the Food and Agriculture Organisation (FAO) nearly 30 million people in Sub-Saharan Africa require emergency food and agricultural assistance each year. A further 200 million are undernourished. The region as a whole remains susceptible to frequent food crises and famines and it is the only region of the world where hunger is projected to worsen over the next two decades unless drastic measures are taken to ensure food security.

A four-page document hammered out at the policy dialogue states that Southern Africa -– presently a net importer of agricultural commodities could become Africa’s bread basket if effective policies that spur investment and the growth of agriculture are developed. The global food crisis, worsened by escalating energy and production costs, has meant many families in Southern Africa go to bed on an empty stomach or cannot afford to buy food when it is available.

Smallholder farmers are often under-resourced despite being the backbone of agriculture in the region and in most of the developing countries around the world.

“Investment in agriculture through the provision of necessary inputs, farmer training, the use of ICTs in agriculture to ensure access to critical information by farmers and other stakeholders are key,” reads one of the resolutions in the Declaration, which will be presented to regional governments.

Governments in Southern Africa are battling to ensure that every citizen has access to maize – a staple in the region – while protecting the maize market from unscrupulous traders. Government agencies have controlled the market because of fears of maize will be hoarded for resale at higher prices on the local market or exported by middlemen when local people need it more.

Debate on the production and pricing of maize highlighted the need for a balance between providing subsidies to farmers who would otherwise not afford agricultural inputs and creating business opportunities in agriculture for the private sector.

Cecilia Makhota, a smallholder farmer from Zambia, told IPS she was benefiting from the liberalised market economy in her country as she could sell her surplus maize to neighbouring countries for double the price she would get on the local market.

Delegates at the policy dialogue noted that since the 1980s, African governments have abandoned policies aimed at food self-sufficiency and instead relied on global markets to provide cheap imports. For Southern Africa, a net importer of grain and major recipient of food aid, the global food crisis is worsening and deepening hunger.

Delegates declared that greater investment is needed in research, policy development and productivity. They argued that access to information be improved through multi-stakeholder dialogue that accounts for Africa’s oral culture and limited access to ICTs, particularly for the smallholder farmers who are central to achieving food security.

Biotechnology scientist, Dr. Wynand van de Walt, told the policy dialogue that food insecurity in Southern Africa would be checked if countries in the region considered adopting genetically modified crops which he said have been found to be high-yielding compared to traditional varieties.

“The planet is spinning around at increasing speed. Unless Africa can jump immediately, it will miss development; technologies will go to other places,” said van der Walt. “We need to jump a chasm that we have and look at other countries that have been successful and not keep polishing what we have done.”

The policy dialogue highlighted that agriculture was under threat from various factors including climate change, HIV and AIDS, competition between cash and food crops, low productivity, post harvest losses, food safety, monoculture and unfair global trading environment in which African farmers without subsidies must compete with heavily subsidised products.

The Declaration also called for strengthening the participation of communities in policy-making processes by empowering them to make informed contributions.

Jose Filipe Fonseca, from the Technical Centre for Agricultural and Rural Cooperation (CTA) called for the accommodation of various views from different stakeholders because they affect food security. He told delegates that mistrust on discussions about food security policies can be reduced if information is given and shared by all stakeholders.

“There is a high level of mistrust between the media and policy makers; in the same way, governments do not trust scientists,” says Fonseca, who gave a presentation on the role of the media in food security.

“The media, who have their own communication agenda, are stakeholders in food security and they affect food security policies. They need to participate as partners in the food security policy discussions. This can be effectively done by building the capacity of the media to respond to and affect the policy formulation process in terms of food security.”

FANRPAN is a multi-stakeholder, multi-national policy network established in 1997 that supports the development and implementation of better food, agriculture and national resources policies in Southern Africa.

FANRPAN CEO, Dr. Lindiwe Majele Sibanda, told IPS that the network has already made significant research and policy contributions. It has pioneered the use of a voucher system to promote fertilizer and seed markets in Malawi, Mozambique, Lesotho, Swaziland and Zambia.

FANRPAN has also developed the first comprehensive study of the impact of HIV/AIDS on household agricultural productivity, and a tool for measuring vulnerability known as the household vulnerability index. The tool is currently being used to plan interventions and monitor impacts of the pandemic in Lesotho, Swaziland and Zimbabwe in partnership with World Vision International.