LUSAKA, Sep 26 2008 (IPS) - "Sometimes there is barely any food at home, so I only eat at school, at lunch," said Justin Banda, a 12 year old student, at Chikumboso school in Lusaka’s Ngombe township. 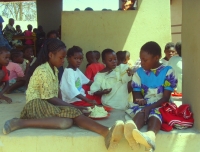 The Chikumboso community school is an informal school run by the local community. It is also one of the 400 sites of a school feeding programme jointly run by the Ministry of Education and the World Food Program (WFP).

Soaring food prices have affected vulnerable people all over the world. In Africa, governments, non-governmental organisations as well as international aid agencies involved in humanitarian programmes have struggled to adjust to the steep increase in the cost of staples.

In his address to an emergency summit on the global food crisis held in Rome in June, the U.N. Secretary-General Ban Ki-moon said," Nothing is more degrading than hunger, especially when man-made. It breeds anger, social disintegration, ill health and economic decline."

Food assistance in schools serves both to improve children’s access to basic education as well as strengthen their nutrition to reduce diseases.

According to a recent survey by the Zambian Ministry of Health, malnutrition levels among school-age children are increasing. The report says a combination of unsafe drinking water, poor sanitation and inadequate nutrition has led to an increase in parasitic infections. This translates into high rates of child mortality.

The World Food Programme in Zambia has targeted over 490,000 poor and vulnerable children under the school feeding program at an estimated cost of $8 million this year.

But the increasing cost of food in Zambia threatens the school feeding programme and the WFP is facing challenges finding affordable, nourishing food. A total of 14,000 tonnes of food is required to feed both vulnerable and ordinary pupil schools per annum. The price of cereals like maize meal, rice and wheat rise daily.

The increased price of food in Zambia has been made worse by the devastating impact of the floods late year. As a result of which tens of thousand of people will require food assistance. Many poor families have switched to cheaper, less nourishing food or skipping meals altogether.

The school feeding program has been running for over five years in 10 districts. It covers an estimated 400 formal primary schools and community-based schools.

Andrew Phiri, a teacher at the Chikumboso school, says the centre feeds over 300 pupils daily in grades from one to five. Most of these children come from poor families and many suffer from malnutrition-related diseases.

"This school meal may be the only one for some of them," Phiri told IPS. "The feeding program is designed to improve access to education for poor and vulnerable children in the country mostly from homes that are hit by HIV/AIDS and other deadly diseases like cancers. And most of the pupils here are orphans."

The programme has been running for close to a decade now.

Phiri added that, "With high food prices, the school are now turning to less nourishing food. And the phasing-out the school feeding programme will of course sees a drop in school attendance."

Zambia Civil Education (ZCE) is a local non-governmental organisation that is involved in the feeding programme.

"In a case of phasing-out the school feeding program," says ZCE programme officer Miriam Mwale, "community-based schools will be the first to go under as pupil attendance is based on the food available at the institution."

Government policies to strengthen support for small-scale farmers to produce more food have failed, largely because of a lack of a functional distribution system for inputs such as fertilisers and seeds.

In a press statement, the Economic Association of Zambia says, "We believe the most comprehensive way to deal with high food prices, hunger and poverty is to invest in agriculture and raise food production."