TRADE-KENYA: A Woman Navigating the Obstacles to the ‘Big Money’

NAIROBI, Sep 9 2008 (IPS) - ‘‘I enjoy the trade,’’ says Sonia Gateri as she ushers me into her office next to the Yaya Centre in the Kenyan capital. It is a hot afternoon and she has been busy most of the morning, preparing for a trip to Tanzania later in the evening. 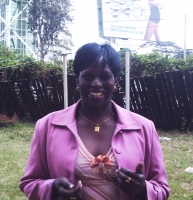 Sonia Gateri has a lot to smile about. Credit: Rosalia Omungo/IPS

Gateri works as an importer in the animal feed business. She has been at it for three years now, supplying the ingredients for animal feed to major milling companies in the east African country’s capital.

Gateri considers the job challenging because of the logistics involved. Each trip begins with a deposit of money to suppliers in the country that she is importing from. ‘‘The first difficulty is that most banks that are found in Kenya are not found in other countries like Tanzania,’’ she tells IPS.

Fortunately one Kenyan bank has expanded into the east African region, a welcome move for her. ‘‘Otherwise you have to carry money in dollars with you, which is quite risky these days.’’

Fluctuations in the exchange rate also pose a major challenge: ‘‘Especially this year, the dollar has been really high. The Kenya shilling has lost a lot on other currencies. In that sense, it doesn’t favour you when you are bringing in stuff from other countries,’’ Gateri tells IPS.

Gateri’s most frequent destination is the Tanzanian port town of Mwanza because of the high number of industries there. ‘‘You get the widest variety of raw materials in Mwanza. There is fish meal (sterilised milled fish used to feed chickens), cottonseed cake, sunflower cake – all used for making animal feed.’’

Kenya Airways has introduced a flight to Mwanza, much to her convenience. ‘‘I sometimes take Kenya Airways to Arusha, then to Mwanza… other times I go by bus, for example Akamba bus.’’ She pays more for air travel, which is why it helps that the road transport goes smoothly – unlike what traders experience in southern Africa.

Gateri uses the internet to find factories and ginneries that make seedcake. Word of mouth is another source of information on what is available in other areas. She networks with other traders who also operate individually.

‘‘I know some of the traders and we compare notes. We do not have a traders’ union as yet for animal feed traders. We do not meet as a group but we at least talk to one another.’’

She travels to Mwanza twice a month and sometimes stays there for a week because she has to find transport to take the goods back to Kenya. But this is the longest time she has ever spent away.

‘‘It is advisable to wait until you see your goods are packed. As yet they do not have services where they pack your goods in containers for you and send it on. You have to do it yourself.’’

Sometimes a loss is inevitable. ‘‘There is a lot of adulteration of materials, especially by factories that manufacture cottonseed cake and sunflower cake. They have three grades because they also export to Europe. Sometimes they get mixed up and sell you the wrong grade – third grade, without your knowledge.

‘‘It once happened to me. I got the third grade and only realised when I took it to the laboratory,’’ she tells IPS.

She ended up losing money because she had to sell it at a cheaper price. However, when this kind of thing happens, compensation is paid with the next transaction.

‘‘Tanzanians, for example, want to make very little money. I think the cost of living in their country is so low. So they come and lower their prices, they spoil the trade.

‘‘They are not looking for big money. The Kenya shilling is quite strong in the region, so they are able to make a profit.’’

This they do at the disadvantage of traders like Gateri. However, she has overcome such problems through the business contacts she has built. She is a regular supplier for some factories which have become her clients. Foreign traders are not able to access these networks.

She started out by securing a local purchase order. Now she has regular customers who keep calling her for orders. ‘‘Every month I have to supply 100 tons of feed. Nowadays, I already know where to take the stuff,’’ she tells IPS.

Gateri has a warehouse in Nairobi’s industrial area where she puts her surplus when she brings materials without an order. These she sells to smaller millers around Nairobi.

She studied for an undergraduate degree in Botany and Zoology at Kenya’s Kenyatta University. She got the idea for the business from a friend and has never looked back. She says she enjoys her work, partly because she makes her money back quickly, with profits.

The enterprising trader and mother of one child sometimes ventures into the cement trade. She has exported cement to neighbouring countries and returned with feed.

Gateri would like to expand her business to bring in larger quantities, as well as diversify the supplies. But she is not keen on exploring markets further afield. ‘‘There is a lot of demand in South Africa. But I am sceptical about venturing there because it is time-consuming and I am uncertain about what I will find there.’’