PORT LOUIS, Feb 27 2009 (IPS) - Soaring food prices and lack of land have forced Mauritius, a net food importing country, to launch an ambitious initiative. The island state is starting to grow its food in other African states where land is lying fallow and labour is cheap. 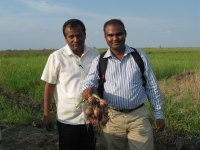 Mauritian agro-entrepreneurs Murveen Ragobur and Gansham Boodhram are back from Mozambique where they cultivated rice on a trial basis last year, as well as potatoes and onions for the local market.

They have been working in the southern African country for some years after launching Greenworld Ltd, their agro-enterprise which produces food for Mauritius and other countries in the region.

Mauritius produces vegetables but no wheat or rice. It tops up its production of potato, onion and garlic with annual imports.

‘‘We all need to go to Mozambique because we lack land and labour here. In Mozambique, you hire people very easily,’’ Ragobur told IPS. Plenty of land that belongs to the state is also easily available, according to him, and it is not sold to anybody. One can get a lease for a renewable 50-year period.

Land is limited in Mauritius, an island of about 2,000 sq km with a population of 1.2 million people. It presently produces only 25 percent of the 700,000 tons of food products it needs annually for locals and the millions of tourists who visit the island annually.

‘‘Our intentions can be good and we can mobilise the resources we need but we have a limit regarding land,’’ agro-industry and food production minister Satish Faugoo said at the launch of the 2008/2015 food security strategic plan in January this year in the capital of Port Louis.

‘‘It is thus important for us to develop a partnership with countries in the region in order to produce food for our own people and for other countries.’’

Jean-Cyril Monty, an agricultural diversification specialist, argues that ‘‘we have a deficit to fill; if we want to produce more food and reduce our import bill, we should turn towards Madagascar and Mozambique.’’

Two major constraints stand in the way of a regional initiative:
political instability and poor sanitary and phytosanitary conditions.

The plan focuses on improving local as well as regional production. The priority crops identified are maize, potato, onion, rice, pulses and soybean for both the local and regional markets.

In this regard, two memoranda of understanding (MOU) have been signed with Madagascar and Mozambique in early 2008. About 5,000 hectares of land are available to Mauritian entrepreneurs in the province of Manica in Mozambique for agricultural production.

Dhaneshwar Dumur, director of the Mauritian government’s agricultural research and extension unit, who visited the Mozambique some time back, says that the climatic cycles are quite interesting and many crops can be cultivated year-round.

‘‘Crops like potatoes that cannot be grown in Mauritius in specific periods can be done during the same periods in these two countries, thus ensuring a regular supply,’’ he observes.

Two major constraints are political instability and poor sanitary and phytosanitary conditions that stand in the way of a regional initiative.

Dumur explains there is need to establish and vigorously enforce international norms in Mauritius and in countries where local operators will be investing. These are essential prerequisites for achieving success in regional and international trade endeavours, he says.

Mauritians are not yet in Mozambique in large numbers because of several other reasons: absence of production on an industrial scale, lack of irrigation facilities and a proper road network and absence of post-harvest infrastructure such as storage facilities, post-harvest treatment units for sorting, grading and packaging.

Time for thinking is over, claim Ragobur and Boodhram, ‘‘because Mozambicans do not need Mauritians’’.

‘‘It is we who need them,’’ Ragobur declares, and delaying such an occasion will affect the Mauritian food security plan.

Ragobur recalls that Mauritians are not alone exploring land for agro-industry in either Mozambique or Madagascar. Chinese, Indian, South African and European entrepreneurs are also in this race for land because ‘‘everybody in this world is affected by the food crisis’’.

However, Mozambicans are still open to Mauritians because of ancestral relations. About a third of the Mauritian population ancestors were brought from Madagascar and Mozambique as slaves two centuries back.

‘‘We should take advantage of such a situation and finalise the projects announced so far rapidly,’’ insists Ragobur, adding that Mauritius stands to lose in this game. They would not get the best land and will not be able to achieve economies of scale if the land obtained is scattered in several small plots far from another.

‘‘As time passes, our strategic plan would no longer serve its purpose because the environment is changing fast. What is good today will not be good tomorrow,’’ he adds.

‘‘The future of Mauritius lies in the region, mainly in Mozambique,’’ Boodhram reiterates.

Ragobur and Boodhram are not alone in this adventure. Another Mauritian, Nassir Arzamkhan, has opened a factory with Indian partners for the transformation of coconuts – available in large quantities in Mozambique – into oil.

Another one is cultivating the jatropha plant for bio-diesel, Mauritian ambassador to Mozambique, Alain Laridon, informs IPS.

The call is coming from Madagascar as well where Mauritius has obtained land concessions a year ago.

From this large island state nearby, the chief executive officer of the Economic Development Board (EDBM) Prega Ramsamy appealed to Mauritian entrepreneurs to act rapidly if not do not wish to compete with other countries for land.

‘‘If you see the rise of agricultural prices since 2007, you cannot sit back and keep on thinking,’’ Ramsamy, a Mauritian himself, told IPS some time ago.

He admits that there may be problems, recalling that both countries have signed bilateral agreements regarding sanitary and phyto-sanitary norms. ‘‘It is time to apply them,’’ the CEO argued.

But some Mauritian entrepreneurs who have travelled to these countries last year find it difficult to operate because of the absence of roads, telephone and electricity in the country. Others talk about malaria and other health risks, snakes, lack of water while some blame the ‘‘lack of work discipline’’ of Mozambicans and of the Malagasy people.

But Boodhram differs, saying there is no snakes in the fields because wild animals move away as forests are cleared and people start exploiting the land. They are never to be seen again.

Language is certainly a barrier in Mozambique as everybody speaks Portuguese and one rarely finds anybody speaking English in the rural region. ‘‘Malaria also is of concern but the necessary precautions have to be taken while staying in this country,’’ he believes.

Prembhoodass Ellayah, who invested in Madagascar last year, deplores the ‘‘attitude’’ of the local people. ‘‘They just want money from foreigners; that’s why I am back’’ in Mauritius, he complains, promising never to return there again.