KARACHI, Feb 13 2009 (IPS) - Outraged by an attack by right-wing Hindu militants on women emerging from a pub in Mangalore, Karnataka state, activists in India have initiated a ‘Pink Chaddi’ (underwear) campaign in which they are sending pink panties to members of the Sri Ram Sena (Army of Lord Ram) on Valentines’ Day. 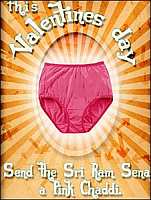 Television cameras caught the attack, on Jan 24, in which a group of men chased and beat up women as they came out of a pub, kicking some of the women who tripped and fell. Some 30 men, including the SRS chief Pramod Muthalik were later arrested.

But, apparently emboldened by the fact that Karnataka state is ruled by the pro-Hindu, Bharatiya Janata Party (BJP), SRS leaders have announced that the group will attack anyone caught celebrating Valentine’s Day.

The Pink Chaddi campaign has defiantly called for a Pub Bharo (fill-the-pubs) action on Valentines Day.

“Go to a pub wherever you are. From Kabul to Chennai to Guwahati to Singapore to LA women have signed up. It does not matter if you are actually not a pub-goer or not even much of a drinker. Let us raise a toast (it can be juice) to Indian women,” Delhi-based journalist Nisha Susan, who started the campaign on Feb 5, wrote in the blog http://thepinkchaddicampaign.blogspot.com/ .

The move has resonated in pub-less Pakistan, where women are equally threatened by right-wing militants who claim to have Islamic sanction for curbing women’s visibility and movements in the public sphere.

Muslim extremists in Pakistan oppose the celebration of New Year and Valentine’s Day with as much fervor as their Hindu counterparts in India.

However, shops in all major Pakistani cities were reported stocking Valentine Day cards and other red and pink paraphernalia while street vendors were doing brisk business selling red roses and heart-shaped balloons.

This is far removed from Saudi Arabia’s Ministry for the Protection of Virtue and Prevention of Vice which, last year, banned the sale of Valentine’s Day material with officials from the ministry seen scouring shops in Riyadh and ordering removal from shelves of anything in pink or red, including roses.

Commenting on the Pink Chaddi campaign, Pakistani filmmaker Aisha Gazdar who recently joined the Pakistani Facebook group ‘Fashionistas Against Talibanisation’ told IPS it was a great idea. “But since we don’t have pubs in Pakistan, we need to find some other way to respond.”

Several people from Pakistan have contacted Susan, says Aniruddha Shankar, also a journalist in Delhi. He told IPS via the internet that Pakistanis have been calling Susan and saying, “Why don’t you send pink underwear to our mullahs (Muslim priests) also?”

“The reason why we picked ‘chaddi’, underwear, is because it’s also the slang word for a right-wing person,” Susan explained in an audio interview to the BBC.

Regarding Muthalik’s response – he has said he will respond by sending pink ‘khaddi’ (homespun) saris to “all of us, thereby shaming us into modesty,” Susan added, “that was an excellent action. It works because we’ve been non-violent, maybe we can get him to be non-violent too.”

“There is of course a point to being light-hearted about this,” she said. “They seem to take Valentine’s Day extremely seriously. For most people, Valentine’s Day doesn’t matter, going to pubs doesn’t matter. We’re not promoting high-consumption lifestyles… What we do object to is people using a certain dislike of high consumption lifestyles to control women’s actions.

“This group has attacked Christians before, they’ve attacked Muslims before, we’re only the latest constituency.”

Some 30,000 people, including older men and women in their 50s, have so far joined the Facebook group ‘Consortium of Pub-going, Loose and Forward Women’ that Susan started against religious extremists in India.

“We’ve been crazily busy since but it’s quite an exhilarating experience,” said Shankar. “Thousands of pink chaddis are on their way to Muthalik (the chief) of the Sri Ram Sena.

“What’s so awesome is that so many Hindus who are teetotalers and vegetarians and quite religious are speaking out and saying this is not on, from teenagers to grandmothers, they have all sent bright gulabi (pink) chaddis to the Sri Ram Sena.”

The Pink Chaddi movement has no relation to the Gulabi Gang in India, Shankar told IPS when asked.

The Gulabi Gang http://www.gulabigang.org/ is a movement of some 60,000 stick-wielding pink-sari clad rural women in India’s Uttar Pradesh, mostly poor and illiterate, led by the 47-year old gadaria (cowherd) Sampat Devi Pal. Her aim is to educate the women and empower them to fight against injustice.

They had actively participated in the first Ahimsa (non-violence) Day on Jan. 30 this year in New Delhi, aimed at reviving the spirit of non-violence popularised around the world by the assassinated, independence leader Mahatma Gandhi.

Ridicule and humour of the Pink Chaddi type were also weapons in Gandhi’s armoury. He handspun his own clothes – mostly a simple loincloth – which he wore to a 1931 audience given him by King George V at the Buckingham Palace. ‘’His Majesty had on enough clothes for the both of us,’’ he famously said, when asked about his disregard for dress protocol.

In an email to IPS at the time, he said he had been in close contact with Sampat Devi since being her French-Hindi interpreter in Paris when her autobiography ‘Moi, Sampat Pal: Chef de gang en sari rose’ (I, Sampat Pal: Warrior in a pink sari) was published last October.

In this case, said Bakaya, it “marks determination not to be cowed down by ‘Hindu’ movements that take British khaki shorts to be symbols of Indian culture!”

“They would just as soon burn the Vedas and most Sanskrit literature as ‘pornographic’ and smash Hindu temples from Konarak to Khajuraho, rather than – more creatively – suggesting that the ‘Vatican conspiracy’ of Valentine’s Day be countered with a true-blue Krishna-Gopi festival on a more suitable Hindu day like Holi, India’s very own festival of love,” said Bakaya.

“If the mostly-urban Pink-Chaddi campaign and the rural Pink-Sari gang joined forces, they could easily take the khaki shorts off the Hindutva goons.”

An email from Nisha Susan doing the rounds invites people to join the Pink Chaddi Campaign. “Be imaginative, have fun and fight back!”

“It does not matter that many of us have not thought about Valentine’s Day since we were 13. If ever,” says one email. “This year let us send the Sri Ram Sene some love. Let us send them some PINK CHADDIS.”

The post provides an alternative to those who don’t want to mail it themselves: “you can drop it off at the Chaddi Collection Points” detailed on the Pink Chaddi Campaign blog.

However, because “we should not colour-discriminate”, those who “really, really can’t send pink chaddis, send those in other colours,” says the blog, providing the Karnataka address of Muthalik.

The last step after Valentine’s Day, is to “get some of our elected leaders to agree that beating up women is ummm… AGAINST INDIAN CULTURE.’’

“For right now, ask not what Dr V.S. Acharya, Home Minister of Karnataka can do for you. Ask what you can do for him. Here is his blog. http://drvsacharya.blogspot.com. Send him some love.”