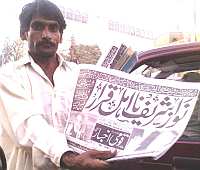 But the alliance between Pakistan’s two main political parties fell apart, mainly over the restoration to office of chief justice Iftikhar Mohammed Choudhry – whose dismissal by Musharraf in 2007 sparked unrest led by the legal fraternity.

“The move [Wednesday’s apex court ruling] plunges Pakistan back into familiar territory,” said PML-N parliamentarian Ayaz Amir, talking to IPS on the phone from the capital Islamabad. “Another crisis, another round of turbulence… We seem to be cursed with the Chinese saying, ‘may you live in interesting times’.”

For most, the Supreme Court ruling – which upheld a lower court verdict, last June, that made Nawaz Sharif ineligible to stand for elections on airplane hijacking charges – has come “like a bolt from the blue,” as Asha’ar Rehman, resident editor of the daily ‘Dawn’ in Lahore put it.

“The political repercussions will be horrific. We were hoping they would show some maturity and let a reconciliation happen,” added Rehman, talking to IPS from Lahore, capital of the Punjab and the stronghold of the Sharifs.

Iqbal Haider, advocate and chairman of the independent Human Rights Commission of Pakistan, termed the decision as being “against democracy, not against the Sharif brothers”.

In a no-holds barred press conference at his Lahore residence, shortly after the court ruling, a belligerent Nawaz Sharif said he had no problems with the PPP, but held the party head, Zardari, directly responsible for the contentious judgement.

Sharif, a former prime minister, also accused Zardari of offering a “business deal” to Shahbaz Sharif, asking him to support the government in extending the tenure of the current chief justice in return for which the court would provide the brothers with relief.

Presidential spokesman Farhatullah Babar dismissed these charges as a knee-jerk response. “The allegations that PML-N chief has levelled against President Zardari are far from reality and are based on ill intention,” he told a press conference in Islamabad later that evening.

Information Minister Sherry Rehman called for examining the court ruling dispassionately while admitting it had created a problem for the government in its efforts for reconciliation.

Many PPP parliamentarians, although unhappy about the decision, say there is unfortunately nothing the party can do in this regard.

The ruling is seen a “technical knockout” for the Sharif brothers who now also stand barred from contesting elections.

“More than anything, it undermines the democratic legitimacy of the government,” political analyst and economist Asad Sayeed told IPS. “Nawaz Sharif is a popular political leader. This decision will push him to the wall and perhaps further towards the religious parties.”

Within hours, President Asif Ali Zardari imposed direct central rule in the Punjab for two months. Defending the decision, a PPP spokesperson cited potential “anarchy” as angry activists took to the streets after Sharif in a press conference exhorted people to come out in protest.

The government wisely refrained from using police force to prevent the protests, as angry activists in various cities burned tyres, blocked traffic, and attacked property. In Rawalpindi, some even destroyed posters of former prime minister Benazir Bhutto and damaged the memorial at the public park where she was assassinated on Dec. 27, 2008.

‘Religious militants’ are widely believed to be behind her murder, barely two weeks before the scheduled polls which Bhutto had convinced her former rival Nawaz Sharif to contest, instead of boycotting them as he was planning to do.

Both twice-elected and twice-removed prime ministers had then returned from several years of exile abroad. During this time, army chief Pervez Musharraf headed Pakistan, after ousting Nawaz Sharif from the prime ministership in 1999.

Sharif had tried to replace the army chief and prevent the civilian flight bearing Musharraf back from an official visit to Sri Lanka, from landing in Pakistan. This was the ‘hijacking’ case for which Sharif was convicted, grounds now for his disqualification from public office or contesting elections.

Bhutto’s return to politics in Pakistan in October 2007 was widely seen as part of a ‘deal’ brokered by Washington to restore civilian rule in Pakistan in order to better handle the ‘war on terror’ – for which policy makers were by now prescribing a political rather than a military solution.

The widespread secular movement led by lawyers to restore chief justice Choudhry had also presented the possibility of progressive political change in Pakistan.

After the general elections of Feb. 18, 2008, the PPP and PML-N had agreed to form government as well as to restore the judges whom Musharraf had removed when he imposed emergency rule on Nov. 3, 2007.

“What people forget about the agreement was that it was also about government formation – the other two clauses were how the federal and the provincial governments were going to be formed,” said Asad Sayeed.

“Nawaz Sharif insisted on the judges’ restoration in order to undermine the PPP. They could not have moved towards forming government if Zardari had not agreed on this clause because Sharif was not willing to talk about it.”

Sharif continued to push for the restoration of chief justice Iftikhar Mohammed Choudhry. Most of the other judges ousted after Musharraf’s November 2007 emergency have since been reinstated after taking fresh oath of office.

The country was bracing for a lawyers’ ‘long march’ to restore Choudhry, scheduled to kick off on Mar. 12 and ending with a sit-in or ‘dharna’ in Islamabad. The PML-N has enthusiastically supported the move.

Ayaz Amir, who has warned against making the restoration of Choudhry the “be all and end all” of politics, told IPS he felt his PML-N party had “stuck its horns too much into this one issue”.

The planned long march, Amir predicted, ”will get more momentum now, but it won’t restore the judges. There will be more instability and tumult, with politicians being further discredited in the public eye”.

More ominously, widespread unrest could also leave the army with “no choice” but to step in – something it is, at this point, clearly reluctant to do.

Amir hopes it will not come to that. “We’re not at that point yet. We have to wait and see what happens when the situation plays itself out.”

Bitter political acrimony is not new in Pakistan. However, so far both the PPP and PML-N have kept their main shared goal before them -to keep the army out of politics and let the political process continue. Observers hope that this long view will prevail.