LIMA, Mar 11 2009 (IPS) - The film La Teta Asustada/The Milk of Sorrow, the big winner at the Berlin Film Festival, drives home the brutal effects of Peru’s armed conflict on thousands of women who were raped and have lived with the pain and a lingering sense of shame and fear ever since. 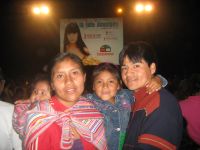 Gladys Pacotaype and her family at the screening of the film. Credit: Milagros Salazar/IPS.

The Peruvian-Spanish-Chilean co-production, whose title literally translates as "The Frightened Tit" – an allusion to an indigenous belief that mothers pass their fear on to their children through their breast milk – won the Golden Bear for best picture in Berlin in February.

But last week it was shown in a much more modest setting: the central square of Manchay, a shantytown on the outskirts of Lima. Hundreds of people showed up to watch the film at the same spot where it was filmed a year ago by Peruvian filmmaker Claudia Llosa, who had promised local residents that she would come back and show them the final product.

The screening in Manchay was doubly meaningful. Some 3,000 of the 40,000 local residents took part in the film, and the shantytown was built on this dusty, stony land during the 1980-2000 civil war by indigenous people fleeing the country’s Andean highlands, which were the epicentre of the fighting between the Maoist Sendero Luminoso (Shining Path) guerrillas and government forces.

"That night they raped my unborn daughter," a dying old woman sings in the Quechua language at the start of the film. Among the spectators at the Mar. 5 screening is Gladys Pacotaype, a 20-year-old who was born in Ayacucho, the region that was hit hardest by the years of horror.

"My cousins were murdered, my mom told me. I was really young," Pacotaype, carrying her little girl in a colourful blanket, told IPS.

Sitting next to her is her husband, a young man who is also from Ayacucho and who at the age of six witnessed his grandfather being killed by the guerrillas. He repeats several times "I cannot forget," which the expression in his eyes confirms.

The Truth and Reconciliation Commission (CVR) set up by the 2000-2001 caretaker government of Valentin Paniagua showed the world the magnitude of the conflict, which left 70,000 dead.

The documented cases of human rights abuses occurred in at least 15 of the 24 departments (provinces) into which Peru is divided.

Ayacucho, in the central highlands, had the largest number of cases of sexual violence, followed by Huancavelica and Apurímac.

Seventy-three percent of the female victims of human rights abuses were Quechua speakers, 80 percent were from rural areas, 48 percent were between the ages of 10 and 30, and eight percent were girls under the age of 10.

According to the most recent estimates, indigenous people account for 45 percent of Peru’s 28.7 million people, with most of the rest of the population being of mixed-race (native and European) heritage, and around 15 percent of European descent.

The Quechua and Aymara, who mainly live in the Andean highlands, are the two largest indigenous groups in the country.

La Teta Asustada, whose main character is the daughter of a woman who was raped during the armed conflict, was shown in Manchay ahead of International Women’s Day, celebrated Mar. 8. under the theme "Women and men united to end violence against women and girls".

"They came in to rape me, first one, then another and another – seven of them altogether. They left me lying like a rag on the floor, like a sheep with its throat cut," Georgina Gamboa told IPS, her studied calm unable to prevent the tears from sliding down her cheeks.

She was just 16 when a group of soldiers, she says, dragged her out of her house by her hair in the town of Pacco in Ayacucho while she slept next to her nine younger siblings. It was 1981, and the dirty war was getting into full swing.

The CVR attributed 83 percent of the rape cases to members of the state security forces.

"They told me ‘talk, you’re a terrorist, confess why you have been killing people’. That’s what they said as they showed me a list of names. I didn’t know anyone on the list, and they kept hitting me. My face was all swollen and my shirt was full of blood," said Gamboa, 45, who was one of the few women who dared to report her case to the authorities and speak out about it during the armed conflict.

She said she found the courage to do so after being tortured and hauled from one police station or military post to another, before she was finally put in jail for four months. That’s when she found out that she was pregnant as a result of the gang rape.

Her 27-year-old daughter "tells me: ‘stop insisting mama, there is no justice for the poor’, and asks me to leave things as they are," said Gamboa.

Her case is still in the preliminary stage of investigation at the prosecutor’s office in Ayacucho.

"There is no interest in continuing the investigations, and the women are required to show the results of legal medical exams, when the event in question occurred years ago. And psychological tests are not considered to be of value," lawyer Bettina Valdéz, in charge of issues involving gender and reparations for the victims of sexual violence in the Human Rights Commission (COMISEDH), the organisation that is representing Gamboa, told IPS.

With respect to the impunity surrounding human rights crimes, there is also a kind of complicity on the part of some authorities, Valdéz maintained. "Government bodies with ties to the aggressors refuse to hand over information to clarify the cases," she said.

Gloria Cano, lawyer for the Human Rights Association (APRODEH), told IPS that of the nine cases involving 31 victims of rape that have been formally filed in court by non-governmental organisations, only one has made it to trial. The rest of the cases are still stuck in the Attorney General’s Office.

"I am only going to fight for one more year, and if there is no progress, I’ll abandon it," said Gamboa.

COMISEDH said many of the rape victims – a number of whom ended up with unwanted pregnancies – have mental health problems and suffer from social stigma and marginalisation, while a majority refuse to talk about what happened.

"Even today, the psychological and physical trauma suffered by rape victims is reflected in the way they talk about it: in many personal accounts, the women do not make it clear whether it was actual rape or attempted rape, out of fear or shame," said Valdéz.

Along the same lines, psychologist Paula Escribens of the Study for the Defence of Women’s Rights explained to IPS that rape victims also "carry around heavy feelings of guilt and stigma, the result of a society that condemns them when they speak out and denounce what happened to them."

The story behind "La teta asustada"

The title of the film alludes to a traditional Andean highlands belief that a mother passes on fear and sorrow to her baby while breastfeeding, as studied by U.S. medical anthropologist Kimberly Theidon.

The film tells the story of Fausta, a young woman who has inherited "the fear sickness" from her mother, who was raped during the armed conflict, through her breast milk.

Her mother’s sudden death forces Fausta to face up to her fears and to the secret that she carries hidden inside her: that she has put a potato in her vagina as a protective shield.

Llosa, 33, said in Manchay the night of the screening that the film is "about the legacy of the war and how we have to heal our wounds. I didn’t try to single anyone out as guilty, or show faces; I just tried to show that the wound is still there."

People are all too aware of that in Manchay, where Llosa decided to film because it is located in a desert valley, and even the central square is a landscape of sand and rocks similar to the arid highlands.

As the people in the neighbourhood recalled while watching the film, most of them came to Manchay to start from scratch in a place that reminded them of their lost land.

"The exact same thing that the movie shows," said Pacotaype.

The government has begun to provide reparations to the victims of the political violence, mainly at a collective level, through the rebuilding and restoration of economic and productive infrastructure for affected communities, and through skills training. But at an individual level, little progress has been made because the list of victims and survivors has not yet been completed.

The coordinator of the multi-annual programming for the integral reparations plan, Margot Quispe, told IPS that as of late 2008, 688 villages had benefited from the government plan. However, she said at least 3,660 communities should receive reparations.

But is there any intervention that puts a priority on women?

"The law requires a gender focus in the reparations, and women also actively participate in choosing the projects for community reparations and in overseeing their implementation," said Quispe.

But the organisations whose representatives spoke to IPS agreed that the reparations plan fails to take into account the specific impact of sexual abuse as a human rights crime, and does not even recognise the other acts of sexual violence reported by the CVR, like forced nudity, forced abortions and sexual slavery.

Nor, said Valdéz, does the reparations plan provide for special procedures for rape victims to register on the government’s list of victims, or for flexible requirements for presenting documentary evidence and witnesses.

The debt for the damages caused is enormous, said the experts. "I just want the state to apologise; what I want is for those who did this to me to admit that they did it," said Gamboa, who knits colourful sweaters "to scare off the dark memories."