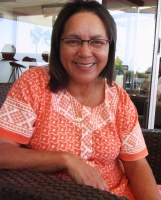 Patricia de Lille: "They focused on a shopping list of weapons, instead of development." Credit: Stephanie Nieuwoudt/IPS

British and German authorities have conducted investigations into the deals. Apart from a couple of successful prosecutions in South Africa, Jacob Zuma, the ANC’s leader and presidential candidate in the country’s upcoming election on Apr 22, has been charged with fraud, racketeering, money laundering and tax evasion.

He allegedly solicited a bribe from French arms manufacturer Thales/Thint, which is also facing charges. Zuma and the ANC have pursued all avenues to derail the case against him, including a currently pending appeal against a decision in the Mauritian courts.

More ominously, the ruling party’s actions have weakened democratic institutions, causing concern among many. In the latest of a string of assaults on South Africa’s fledgling democracy, Zuma’s friend and former financial advisor Schabir Shaik was released on ‘‘medical parole’’.

He served a mere 28 months of the 15 year sentence he received for corruption in the arms deal. The verdict also implicated Zuma. Medical parole is a process aimed at allowing terminally ill prisoners to die with dignity at home.

Indications are that Shaik, who spent most of his jail time in a hospital allegedly eating take-away meals, does not suffer from a terminal illness.

De Lille has called for a full investigation into the circumstances surrounding Shaik’s release. She now heads up an opposition party, the Independent Democrats (ID), after breaking ranks with a former liberation organisation, the Pan Africanist Congress.

Stephanie Nieuwoudt spoke to her about the deal and the threat that attempts to cover up foul play holds for the consolidation of South Africa’s 15-year-old democracy.

IPS: Was the arms deal scandal a turning point in the development of the new South African democracy? Patricia de Lille: Undoubtedly. The dream and the values that we fought for in the struggle against apartheid were shattered. The hope that we had in the new leadership was destroyed. They had forgotten about the redistribution of wealth and the development of the country. They focused on a shopping list of weapons instead.

Yes, there was a need to transform the (former) South African Defence Force to make it more representative of all the people of the country.

But instead of re-equipping the new South African National Defence Force with appropriate weaponry, the politicians bought prohibitively expensive equipment – including 24 Hawk fighter planes from a British arms supplier for which we paid three times more than what they were worth.

Little came of the promised offset transactions that were supposed to have brought 11 billion dollars in investment to South Africa and create 65,000 job opportunities.

When I blew the whistle on the deal in 1999, former President Thabo Mbeki and a number of ministers attacked me on national television. I was called a counter-revolutionary and received death threats.

After two years, the truth slowly started to emerge but, to this day, the ANC is still denying the corruption charges.

IPS: How has the arms deal affected South Africa? PdL: The fall of Mbeki; the recent split in the ANC and the formation of (breakaway party) the Congress of the People; and the increase in the level of corruption in South Africa can all be linked to the arms deal. It has impacted on all levels of society.

(For example), the release of Schabir Shaik was well planned. The minister of correctional services waited until parliament was in recess before releasing him.

When I blew the whistle in the 1990s, I made it clear that I did not believe that everyone in the government was corrupt but I wanted action to get rid of the rotten apples.

IPS: How should the government have handled the weapons scandal? PdL: They should have admitted right from the start that there was corruption and should have investigated it. If this was done, this country would by now have achieved much more.

However, I believe in our judicial system, our independent judiciary and our wonderful constitution. If the government does not want to pursue charges, we can still set in motion mechanisms that protect the rule of law.

IPS: What steps have you taken to bring the perpetrators of alleged graft to book? PdL: Since blowing the whistle, Tony Yengeni (former parliamentary chief whip of the ANC) and Shaik have been prosecuted (and found guilty). The allegations that led to their prosecutions and that of Zuma were contained in what has become known as the ‘‘De Lille Dossier’’.

I have also brought private prosecutions against 27 individuals who received discounted cars as part of the arms deal. Even though the ANC is continuing its massive cover-up, there will be more prosecutions and the ID will ensure that the whole truth comes out.

The highest ranking casualty of the arms deal has been Mbeki. The ANC ‘‘recalled’’ (fired) him because of the Nicholson judgment. (High court judge Chris Nicholson in September 2008 dismissed corruption charges against Zuma on procedural grounds, a ruling that was overturned by the supreme court of appeal in January 2009.)

But this is not just about the arms deal. We in the ID believe that through corruption in general, a lot of money is being stolen from the taxpayer and the poor.

IPS: The ANC has been accused of going after the National Prosecuting Authority (NPA) and its Scorpions investigative unit because of their prosecution of Zuma and others. The Scorpions has since been disbanded and the head of the NPA fired. What is your view? PdL: The NPA has over the years been fingered for favouritism and I think it is fair to ask why so many of Mbeki’s cronies escaped prosecution for their role in the arms deal.

The Ginwala commission (headed by Dr. Frene Ginwala, a former speaker of the national assembly of parliament), which investigated Mbeki’s suspension of NPA head Vusi Pikoli, found that former justice minister Brigitte Mabandla had interfered with the NPA. The ID has laid a criminal charge against Mabandla for this.

IPS: How has the arms deal scandal and the problems at the NPA impacted on democracy in South Africa? PdL: The ANC’s attempts to cover up the corruption have threatened fundamental principles, such as the separation of powers and the independence of the judiciary.

The party’s efforts to ensure that Zuma does not have to face justice have weakened our crime-fighting abilities. We now have leaders who have surrendered the moral high ground. You cannot claim we are all equal before the law when those guilty of corruption are forgiven, rewarded or ‘‘redeployed’’.

It is frustrating that nothing can be done about Zuma running for president while there is a court case pending against him. He has not just been accused but been charged with corruption. Each party can appoint its own candidate, so legally there is nothing wrong with his candidacy but there is a problem from an ethical point of view.

He should withdraw his presidential candidature.

However, I have confidence that the wool will fall from our people’s eyes and that they will punish the ruling party at the polls when South Africans vote in April.

I am not an alarmist, I love my country. If I gave up, I would be part of the problem. Instead, I have made the decision to fight for accountable and transparent governance and to offer solutions to the massive challenges we face, including unemployment, poverty, HIV and AIDS and crime.