RIO DE JANEIRO, Apr 3 2009 (IPS) - While the government of the state of Rio de Janeiro insists that a wall being built around a poor neighbourhood is designed to protect what remains of Brazil’s Atlantic rainforest from further encroachment by the slum, human rights groups say it is designed to further separate the rich and poor. 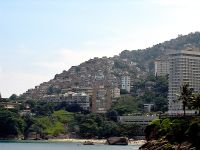 While the residents of the slums, known as favelas, built on the mountains surrounding the city are used to hiking up and down the steep stairs and alleyways of their neighbourhoods several times a day, climbing up to the wall is difficult for an outsider.

But that is not only because of the physical challenge involved. It is also easy to get lost in the maze of narrow, dark corridors of the favelas.

However, there is a now a new landmark that has become a “must” destination for journalists in Rio since construction began in late March – the so-called “eco-barrier.” Even before a reporter manages to ask where the wall is, the attentive, helpful residents of the Santa Marta favela point out the way, providing detailed instructions on how to get there.

Some even help lead the way, gracefully and effortlessly climbing the slope, trailed by this panting, gasping reporter who tries to look dignified while barely able to ask questions about the first few metres being built of the already famous wall.

The state government’s plan is to build 11 kilometres of concrete walls around 19 Rio favelas by the end of the year.

In his blog, Portuguese writer José Saramago compares the wall to the Berlin Wall or the Israeli West Bank barrier, while other critics liken it to the wall between the United States and Mexico, and the Brazilian human rights groups Global Justice said it would create “social apartheid.”

The head of the state’s public works department, Icaro Moreno, told IPS that it is an environmental barrier to prevent further deforestation of the already decimated Atlantic rainforest, an ecosystem that once covered a large part of Brazil’s Atlantic coast area but which has lost 93 percent of its forest cover.

“The boundary was invisible, and now it is physical,” said Moreno. “Like at our house, when we buy a plot of land and use walls to mark the boundary and show ‘this is my part.’ What the state is doing is saying: if you go beyond this or break it, you are violating public property.”

But Nandson Ribeiro, a computer technician who lives in Santa Marta, says the wall is like “a cage.”

Down below, “the police keep constant watch over the area,” since the administration of Governor Sergio Cabral occupied the favela, using both a heavy police presence and social projects to try to eradicate drug trafficking violence.

“On the other side is the wall. And over there is the jungle,” says Ribeiro, pointing to describe the new geographical limits of his neighbourhood.

When we reach the edge of Santa Marta, we run into the wall. It is three metres high and separates the forest from the bare brick houses – the homes of the most privileged slumdwellers – or shacks on stilts that dangerously crowd the hillside.

According to the government, this is another reason for the wall: to prevent environmental catastrophes, because in the last few years, deforestation and the continued construction of housing on the slopes have accentuated the problem of mudslides, which frequently claim lives in the favelas during Rio’s rainy summers.

But slumdwellers, social analysts and human rights activists say the steel and concrete wall, which is to cost 18 million dollars, will also reinforce the segregation between rich and poor.

“That’s not true at all,” responded an indignant Moreno. People “are completely free to come and go as they wish. The wall is just a barrier to protect the forest.”

Alarming statistics on the destruction of the Atlantic rainforest contributed to the idea to build a barrier.

A study by the city government’s Pereira Passos Institute showed that half of Rio’s 750 favelas, home to 1.5 million of the city’s residents, doubled in size between 1999 and 2004.

The study, carried out using satellite images, confirmed what was readily visible to observers.

Lacking open space for expansion in a city that is virtually surrounded by forested hills and the sea, the favelas stretch up the steep mountains, which are lined with irregularly built homes, sometimes two or more stories tall.

Rocinha, the city’s biggest favela, where 200,000 people live, is the clearest example of this phenomenon. Construction only stops there when houses run up against rocky crags or other physical barriers.

The longest stretch of the wall is to be built around Rocinha.

On the south side of Rio, the Tabajara favela spreads across what was once a forested hill, up to the edge of the municipal cemetery.

Other slums are expanding into environmental protection areas.

Moreno admits that the best thing would be to monitor, in order to curb further construction. But that is not an easy undertaking, he pointed out, because people carry in building materials in the silence of the night, “under the trees,” and in the morning, a new house has appeared in the forest.

Several governments have attempted to carry out reforestation efforts by drawing in the local population of the favelas to take part in the task.

Some have also resorted to less popular methods, like the one adopted by the previous state environment secretary, Carlos Minc – who is now Brazil’s environment minister – which involved the demolition of homes – both the shacks of the poor and the mansions of the rich – that had been illegally built in protected areas.

But all of the measures came up against the country’s severe housing deficit, which stands at nearly eight million units, according to the most conservative estimates – the official figures.

Some of the most pressing situations are found in the southern states of Rio de Janeiro, São Paulo and Minas Gerais, whose wealthy capitals are the biggest magnets for poor Brazilians from other parts of this country of 190 million people.

“The city government is trying to control urban development by defending the environment,” said José Hilario dos Santos, president of the Associations of Residents of Santa Marta.

But it is late for that, he told IPS, because “now the communities have grown, and people still don’t have a place to live.”

A few days before construction of the wall began, Governor Cabral – an ally of President Luiz Inácio Lula da Silva, with whom he is carrying out joint social and income-generation projects in the favelas – announced an ambitious housing programme that will include the state of Rio de Janeiro.

The 15.4 billion dollar housing programme is aimed at reducing the country’s housing deficit by 14 percent by building one million housing units by 2010.

In dos Santos’s view, the only “wall” that could have any real effect is a “social” barrier built by investment in housing, culture, sports and employment, “to keep young people from being idle and pull them away from drugs,” and in education and day care centres.