SOUTH AFRICA: Finally Owning the Land That They Have Been Tilling

CAPE TOWN, May 20 2009 (IPS) - Bathed in sunlight on a crisp autumn morning, the Welgemeen farm in the Ceres district in the Western Cape province is a shining example in the otherwise patchy track record of land reform in South Africa. 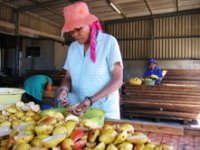 The export farm is partly owned by cousins Robert and Peter Graaff (20 percent each) with the majority share (60 percent) owned by 210 people disadvantaged by South Africa’s colonial and apartheid history. The cousins are scions of a well-known farming family who has been tilling the land for three generations.

Land reform in South Africa has, for the most part, not been a success story.

Some agricultural land has since the democratic transition in 1994 been given to black claimants, either as restitution (on the basis of a historical claim to land from which claimants or their forebears were evicted) or redistribution (claimants receive government grants to obtain land).

But large tracts of such land have been mismanaged and lie fallow. This is due to a number of factors, including lack of support by existing farmers and the government in the form of training; lack of seeds and fertiliser; and new farmers becoming despondent and leaving the land when they feel overwhelmed by the demands and costs of agriculture.

But Welgemeen is flourishing. ‘‘The new owners of Welgemeen are under the mentorship of successful commercial farmers. Because they have shares in the farm and the necessary infrastructure, they are determined to make a success of farming,’’ says Robert Graaff.

He was awarded the Young Farmer of the Year award by AgriSA, South Africa’s agricultural association, in 2007.

Welgemeen lies adjacent to the Graaff cousins’ other farm, the commercial farm Lushof. When Welgemeen became available just over three years ago, they jumped at the chance to buy it.

‘‘Some of the shareholders’ families have been with our family for decades. Welgemeen is one way of giving something back (to the community)," explains Graaff.

Jacobus Mietas is one of the shareholders. He has been with Welgemeen for nearly four years, since the start of the venture.

Born in the nearby town of Ceres and having lived and worked in the surrounding Witzenberg area all his life, he took the opportunity to become a joint landowner when the Welgemeen initiative came around three years ago. ‘‘I thought it was a good idea for us to get ownership,’’ Mietas declares.

The model that was followed was to get a sufficiently large number of formerly disadvantaged members of the community together who might be interested in becoming part of the venture.

Each of them was entitled to a government grant for acquiring land. This sum was pooled, and with additional financing it amounted to 60 percent of the purchase sum. The Greeff cousins put up the remaining 40 percent.

Further funding and other forms of support were accessed to build the farm. For instance, the department of agriculture – through its comprehensive agricultural support programme – helped the venture to acquire the necessary new equipment to become a viable business.

Today, 130 hectares of Welgemeen are planted with deciduous and citrus fruit orchards, including apricots, peaches, nectarines and pears. They expect to harvest 3.5 tons of fruit this season, of which 70-90 percent will be dried.

By far the largest portion of their harvest is exported – to Europe (mainly Britain), the Middle East, North America and the Far East. The remainder of their produce is sold to large local retailer Woolworths, and to the South African Dried Fruit Board. Both of these are demanding clients that only take produce of high quality.

Greeff says Welgemeen is accredited by the giant UK-based international retail chain Tesco. ‘‘You have to run the farm along commercial lines. Our main concern is sustainability,’’ states Greeff.

Of the 210 black shareholders, 18 work on Welgemeen permanently. The rest either work on other farms owned by the Graaffs or are employed elsewhere. All profits that have been made so far have been ploughed directly back into Welgemeen.

‘‘We made it clear from the beginning that we will not be paying dividends for a few years. You have to fatten a cow before you can milk it. Everyone agreed,’’ according to Graaff.

‘‘The growth in the farm’s value also has to be taken into account. Its value has trebled over the past three years. Whereas each shareholder’s portion was worth around 3,467 dollars at the beginning, it now stands at around 10,760 dollars each.’’

Greeff says a high level of mutual trust between all the shareholders and workers is needed to win with a venture like Welgemeen. ‘‘It’s a two-way street. We help each other. You have to be totally transparent.’’

Welgemeen’s books are audited by accounting firm PricewaterhouseCoopers (PWC). The business has four board meetings a year, and an annual general shareholders’ meeting.

The Greeffs are members of the board, as are the other shareholders through the representatives of the two trusts that they have formed. Broad policy decisions about the strategic direction of the business are taken at board meetings.

Greeff has an honours degree in agricultural science from the University of Stellenbosch near Cape Town.

The farm manager is Hubert Roux. He also has a tertiary agricultural qualification. ‘‘People here are positive. Everyone cooperates for the common good,’’ he enthuses. Mietas agrees: ‘‘We all have a stake in this.’’

Aside from the shareholders, another 68 people are in full-time employment on the farm while a further 100 are contract workers. These work opportunities help to alleviate the huge burden of unemployment in the area.

Sofia Muller, a fruit packer, tells IPS: ‘‘I support a family of five people. It is difficult to survive because there are very few job opportunities in the area.’’ She receives about 15 dollars per day during the packing season – an income that is crucial in a poor household.

For Mietas, his stake in the farm means a more sustainable livelihood. ‘‘Farming is in my blood. This farm is an investment in the future of my children.’’