ACCRA, Jul 7 2009 (IPS) - When you meet Naomi Aframea, 60, in the streets of Accra, you could take her for any other Ghanaian woman going about her business. But step into her stall at Agbobloshie Market, one of the capital’s satellite markets, and amidst stacks of the wooden crates used to ship tomatoes, you sense her power. 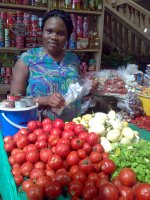 When I met Aframea, she was counting money and engaged in conversation with another equally-powerful tomato trader. Neatly dressed, in contrast to the other women who sell tomatoes in the market, her soft-spoken nature belies the control she exerts over hundreds of women and farmers in a network that spans the country.

She is a “tomato queen”, one of the canny businesswomen who dominate trade in fresh produce in urban centres across Ghana. Aframea is one of those who controls part of the Agbobloshie Market’s trade in tomatoes.

Aframea told IPS she was introduced to the trade by her late mother. “I used to help out travelling round to the growing areas with my mother to buy the tomatoes to sell at Nkawkaw and other satellite markets in the Kwahu area in the eastern region.”

Every urban centre in Ghana has its queens, who travel to tomato-growing areas to negotiate wholesale prices with farmers and cart the produce away to markets in towns and cities. The queens have a system of markings on the crates used to transport produce, allowing them to track the traders who work for them and the farmers who supply the tomatoes.

Because of the perishable nature of tomatoes, the queens generally have the upper hand over the farmers they buy from. They don’t hesitate to put extreme pressure on the farmers, who accuse them of cheating them to pocket the lion’s share of profits.

Victoria Adongo, programme coordinator of the Peasant Farmers Association of Ghana, notes that “these tomato queens have been able to organise themselves into a sort of cartel and have used that to control the pricing of the produce to the disadvantage of the farmers.”

Adongo said the women use the perishable nature of the produce to their advantage, forcing farmers to accept low prices so as not to lose out completely.

“What they do is that they wait till late afternoon after the farmers have packed their produce before they go to the farms and simply refuse to pay what the farmers ask for. I have witnessed an instance where the women decided to leave a farmer with his produce, only to return to pay less than what has originally been agreed,” added Adongo.

“We do not have any power as has been rumoured all over the place,” Aframea demurs. “Tomato is a seasonal produce and we have the lean and the bumper harvest time. So when it is in season and the harvest is good, you also have to consider the total cost of transportation and other expenses before offering to purchase from the farmer.

“If you pay high prices, you may bring these tomatoes to the market and end up losing.”

She says when the growing season in Ghana ends with the onset of the dry season in September or October, some of the traders have to travel to Burkina Faso, working through translators with the growers there.

Burkina Faso has gradually become an important source of tomatoes because extensive irrigation projects that have taken off in that country enable the farmers to farm all year round, unlike their counterparts in Ghana.

Sustaining her view that the queens form a cartel to the detriment of farmers’ profits, Adongo recalls an attempt by the government to set up a processing plant for tomatoes at Pwalugu, in the north of the country. This would have given farmers an alternative buyer for their crop, and the chance to get a better price.

“What (the queens) did was when the government decided to buy from the farmers to feed the factory, the women offered more money to the farmers and this left the factory with nothing to work with,” Adongo said. The factory duly closed down, and the queens dropped their prices again.

Aframea laughed off these accusations saying, “How can we pay more than the government who has more money than we have?”

There have been other attempts to build processing plants in Wenchi, in the west of the country, and at Ada, just outside the capital. But the queens have seen off each new challenge.

Ernest Yeboah, a tomato farmer, told IPS, “They are ruthless in their business tactics and would do anything that would make them get cheaper prices in order to make huge profits.”

Small-time tomato sellers in the market must accept the prices they set; and farmers in the countryside chafe under their control; but tomato queens remain unchallenged masters of their domain.