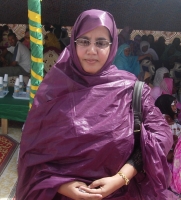 Opposition parliamentarian Mint Mustapha says: 'We will continue with the fight for the socio-political and economic well-being of all Mauritanian women.' Credit: Ebrima Sillah/IPS

In a joint statement, four leading opposition parties said that "electoral lists had been tampered with and voters had used fake ballot papers and identity cards during the poll to add to Abdel Aziz's tally."

A spokesperson for the four opposition parties, Mohamed Ould Biya, said, "What we are seeing here is a sham of an election whose outcome has been deliberately prefabricated. We call on the international community to put in place an inquiry to shed some light on the electoral process."

However Interior Minister Mohamed Ould Rzeizim refuted claims of electoral malpractice in a telephone interview from Nouakchott, and said that the opposition parties challenging the results have not forwarded any evidence to his ministry to back their claims.

"In Mauritania there are clear procedures as to what those who are not happy with the results of any election should do. If they think that the electoral list was tampered with or voters were given fake ballot papers, let them come out with the proof and go to the constitutional court to challenge these alleged frauds."

The head of the country's electoral commission, Sid'Ahmed Ould Deye, announced on Tuesday that four candidates had submitted complaints about irregularities. Official results from the ministry said General Abdel Aziz won 52 percent of the total votes cast. Boulkheir and Daddah, his nearest challengers, received 16.3 and 13.7 percent of the vote respectively.

Mariam Mint Mustapha, a member of the Union for Democracy and Progress party said she believes that incumbency and money played a pivotal role.

"Remember, well before the election, it was only General Aziz who was seen on national television talking about his plans for Mauritania. Projects funded by government were credited to him and in the months leading to the election, the military junta embarked on a wild spending spree on projects in rural areas and in the capital which were credited to Aziz and his commitment to help the poor.

"So in the light of this, it was difficult for the opposition to make a formidable argument against Aziz because for many ordinary Mauritanians, development is all about new projects they see around them," said Mint Mustapha.

Mint Mustapha was among women parliamentarians who set up an umbrella group called Hawa to highlight women's issues during the campaign. She said few male politicians took up the call.

"The truth is that women's emancipation will continue to be an everyday fight for those of us who want to see a better Mauritania. From the campaign it is clear that most of the male politicians are uncomfortable openly talking about women’s rights issues, especially in conservative areas for fear of losing the support of their constituents," Mint Mustapha said.

"And even with the election of General Aziz I doubt whether much will change… but we will continue with the fight for the socio-political and economic well-being of all Mauritanian women."

Until recently Mauritania’s economy was heavily dependent on fishing, mining and agriculture – despite frequent droughts. In 2006, the country began offshore oil exploration and the prospect of imminent oil wealth raised the stakes much higher in this election.

In the last few years Mauritania also has seen an increase in attacks on both foreign nationals and security personnel by an Islamist group calling itself al-Qaeda in the Islamic Maghreb, the latest attack coming on the eve of the election when gunmen believed to be linked to the group attacked a police post in the capital. Two weeks earlier members from the same Islamist group claimed responsibility for the killing of a U.S. national in the capital, Nouakchott.

Abdel Aziz, who toppled Mauritania's first elected president Sidi Ould Cheikh Abdallahi in August last year, has declared fighting terrorism will be one of his main priorities at a press conference following his election as president.