CAPE TOWN, Jul 8 2009 (IPS) - Despite the global economic crisis, the world’s elites will only “tinker” with the world’s markets and financial systems and not bring about the fundamental shifts that are required, says Gyekye Tanoh of the Africa Trade Network. 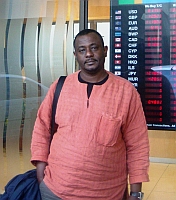 Gyekye Tanoh: As long as there is resistance, there is hope. Credit: Christi van der Westhuizen/IPS

Tanoh believes the global economic crisis demands democratic action. And African states should be looking at rebuilding domestic markets as a solution.

A Ghanaian policy analyst, Tanoh believes that civil society movements have to demand the bold steps required to turn the crisis around.

Leaders of some of the world’s most powerful economies meet in L’Aquila, Italy this week, and there are calls from all quarters for them to take seriously their obligations towards the developing world – both in terms of meeting pledges on development assistance and in reforming the terms of trade and investment that continue to disadvantage the majority of the world’s citizens.

The ATN is a content-wide umbrella body for civil society organisations, movements and campaigns working for trade justice at multilateral, regional and national policy levels.

IPS: What has been the African response to the global economic crisis? Gyekye Tanoh: There is a complete lack of recognition of the nature of the crisis. Because, first, it is believed that African financial sectors are weakly integrated into the global economy. It is believed that the different financial institutions have barely taken part in the activities that generated these toxic assets, so they will be unaffected.

This is wrong because the key thing – here or in the U.S. – is that there is a disconnection between the real economy and the financial sector.

(In the U.S.) the financial sector decided not to lend to agriculture and industry and turned to households to devise all number of ways to continue lending to people who cannot afford it. In Africa, even before the crisis, lending to the real sector was constantly dropping.

IPS: This is on average across the continent? GT: Yes. Meanwhile, lending for export boomed. On a continent that is import-dependent, this meant that you were lending to facilitate multinationals and middle-class and elite consumption. Personal lending also increased dramatically.

You take most of African agriculture – family farms, subsistence farming. There is hardly any bank credit. Most of it is self-financed.

There is a multi-tier credit system which makes the poor pay much higher for entry (to the credit system) than anybody else. So, if you take Africa as a microcosm of dislocation between finance and the real economy our dysfunction is long-standing.

To say this is simply an external or exogenous shock that has nothing to do with African economies or their trajectory, is superficial and dangerous. That is how it has been approached. Add to that the potential effects of the drop in foreign direct investment.

Because of the dislocation you see capital flight. And governments’ response to imported inflation is to deflate the economy by increasing interest rates. People approach this from the supply-side economics perspective but we should approach it from demand-side economics.

How do you rebuild domestic markets? You have to ensure the revival of demand which can be the basis for domestic production, savings, domestic mobilisation of investment, tax revenue and so on. This has to be the basis of different intervention in sectors and across sectors.

We need to roll back the deregulation and liberalisation of the financial sector and have a rethink around policy-based intervention. For example, banks need to be told you will spend X percentage on agricultural investment.

But one thing that is implicit in every plan – whether it’s from Sarkozy or Gordon Brown or Obama – is that the demand exercised by a consumer has a role in the economy. Here (in Africa), none of that figures in the argument. The demand from abroad is the key thing. Export markets, foreign investment. There should be some element of redistribution.

(We should be doing) things like employment-led growth, rural industrialisation, reactivating consumption, public investment in health or education, trying to build domestic industries around those – for example, paper production for text books or pharmaceuticals or syringes or hospital supplies.

(We should be building) the interconnection between different existing economic activities, growth points that combine agriculture and industry in a more focused way and use finance to support this.

(There should be) targeted policy prescriptions of which the precondition should be public participation (where) the needs of different communities and sectors are debated and harmonised so that trade-offs can be seen to benefit all working people.

This is an unprecedented crisis in our life time. This scale of emergency requires fundamental shifts and boldness and audacity. This will not come from the elites who have benefited and profited from the state of things. They will tinker; they will make sure they pass on the burden to someone else. It’s our job to ensure that does not happen.

IPS: From an ecological point of view it will be a disaster to turn every African into a consumer at the level of, say, the American consumer. The planet can’t sustain that. Creating domestic markets mean turning people into consumers. What is your response to this? GT: The fact is for the people to consume sustainabl(y), they have to produce as well. It is the mechanism of production and the linkage between consumption and production which is the terrain for addressing the ecological question.

We have far more of an opportunity to do this than many other countries that have huge investments in coal power generation, plants and oil. I don’t believe consumption by individuals and households in the West is the major problem. I think it is the industrial-scale, profit-based production that is the problem. You have to rein in that corporate power.

IPS: But U.S. consumers produce a high volume of waste. GT: Yes, when you enter a supermarket you have 6,000 brands of toothpaste. Why, given all the packaging and chemicals used? That is not the fault of the individual, who is supposed to be revelling in this paradise of choice – which is no choice at all because one brand of toothpaste does not fundamentally differ from another.

If you have to go home and unwrap the packaging and because of the privatisation of waste collection you have to dump it through prescribed methods that you have no say in, I can’t see how you can lay the blame on the ordinary consumer.

Even if there are instances of waste in consumption it is because it is forced on the consumer. You have no choice. There is a linkage with the exploitation that is taking place in the workplace. If you take the U.S., the financial crisis stems also from the fact that there has been long-standing wage repression in the U.S.

Real wages have remained stagnant or have fallen in many sectors since 1973, apart from a few of years in the 1990s. That is another reason why people have to borrow so heavily from the banks.

IPS: But what do Africans do with their governments that buckle time and again under pressure from the North rather than following the example of the Argentineans and the Venezuelans ? GT: It is not luck that the governments of Argentina and Venezuela came into being. It is struggle that produced them. Bolivia is a classical case in point. Its struggles around water and natural resources produced the movements that created Evo Morales and his government.

As long as there is resistance and struggle, based on solidarity, self-activation and ever-widening networks of participation, there is hope. I disagree with the notion that people get the government they deserve. In that case, the analysis of inequalities in power does not make any sense. The possibility exists that movements can arise and that there will be seismic shifts.

It will take real work and real people to begin to activate that process and to incrementally realise our potential. The only thing we can do is to cultivate that resistance. Without that, our capacity to respond becomes weaker. When things get worse, it is not an abstract proposition. People die when things get worse.

When water is polluted by a mining company, people die. When land is poisoned, people die if they can’t produce. The real struggle we have to wage is on the concrete issues.

The principles that emanate from those struggles; the alliances and networks and self-organisation that emerge… In those acts of being and becoming, I believe, lie the agenda for responding to the crisis today — and the agenda that can pull us back from the brink.