SEATTLE, U.S., Jul 8 2009 (IPS) - In Janice Fine’s most recent project, eight workers centres have joined with the Centre for Community Change, where she is a senior fellow for organising and policy, to provide inexpensive financial services to low-wage immigrant workers. The services also provide an income stream and membership base for the centres. 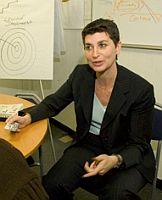 Such innovation and pragmatism are rooted in over 20 years as a labour, community and electoral organiser. Fine’s portfolio has ranged from Rev. Jesse Jackson’s 1988 presidential campaign to the New England Money and Politics Project to AFL-CIO and construction union organising in Massachusetts and Florida.

Currently, she is assistant professor of labour studies and employment relations at the School of Management and Labour Relations of Rutgers University in New Brunswick, New Jersey.

Her book, ‘Worker Centres: Organising Communities at the Edge of the Dream’, was published in 2006.

Fine spoke with IPS by telephone from her office in New Brunswick, New Jersey. Excerpts from the interview follow.

IPS: The title of one of your papers is ‘A Marriage Made in Heaven? Mismatches and Misunderstandings between Worker Centres and Unions.’ What are those areas of friction? JANICE FINE: First of all, since I wrote that piece, I think there has been a lot more promising cooperation that’s been going on between unions and workers centres. So things have been going in a pretty positive direction.

But in general, at its core the friction is because unions by and large are concerned with getting to collective-bargaining agreements and formalising a relationship between specific employers and specific groups of workers.

In general, workers centres are more informal, and though they do collective action, they’re not working towards collective bargaining, and they don’t sign formal contracts.

The friction is that, in general, workers centres are more social movement organisations, considering themselves part of a larger social movement around fair wages and just and respectable work, around economic and racial justice, and global democracy. And unions behave more like economic organisations, developing political alliances and doing their organising, to advance more of their direct interests.

IPS: At this point, there’s obviously more stress because of the economy. How do you see the paucity of jobs all around affecting these relationships? JF: To the labour movement’s tremendous credit, I don’t think there’s ever been a more explicitly pro-immigrant worker time than the last ten years, and I think that that centre has held despite the economic recession.

So on a policy level, in terms of the national AFL-CIO and national Change to Win and the national unions, there are some stellar examples of working together.

There’s a strategic challenge in any economy in organising residential construction, and then there’s the strategic challenge of trying to have a workers centre and a union cooperate. Now that’s all taking place in the context of a global recession. So all those things make this moment a difficult one.

But in terms of good feeling, good will, it’s sort of unprecedented really.

IPS: What about with the possible upcoming immigration reform battle? How do you think cooperation has gone between them on the immigration policy level? JF: By and large there’s a lot of consensus on the need to uphold labour standards, about the need to create some kind of pathway to legalisation for the 11½ to 12 million undocumented workers who are here now, for an end to workplace raids and home invasions. I think that the sticking point is around future flow, how to manage the flow of immigrant workers who are going to continue to come. Both the white-collar workers, because the H-1B programme, there are some white-collar unions that object on the grounds that they feel like there are white-collar native and naturalised workers who ought to be able to compete for those jobs and very often are not able to.

And there’s the more low-income, low-wage, unskilled worker question of what happens with future flow programmes.

IPS: Do you see any chance of having a temporary worker programme that doesn’t undercut standards and that’s fair to the workers? JF: On principle, I totally understand the idea that we don’t want second-class citizens and that we want people who come here maybe for economic reasons who can exercise political and economic rights equal to everybody else once they arrive.

On the other hand, I think that it’s a little bit outdated. There’s no question that in this era, and frankly not just in this era – Mexican workers have been coming for a hundred-plus years to the U.S. – we need to have more of a transnational idea of how workers can travel across borders with their rights intact.

The truth is we’re not going to stop immigration. My own view is this is kind of a good time to get things right because flow is lower. And if we’re not going to stop it, then we in my view should stop looking at immigration as a pathology that needs to be wiped out, that the American movement or every labour movement would be better off without, and understand that both in the E.U. and in the U.S., in lots of places, immigration is now a fact of life.

So the question is: how do low-wage immigrant workers come with rights, enforce those rights, and join with nationally based and locally based institutions like unions and workers centres to press those rights.

There’s that old, great quote: ‘We asked for workers but we got people.’ My experience is that if you ask a low-wage immigrant worker when they come here what kinds of jobs they’ve had, it runs the gamut from construction to dishwashing, restaurant work, and light manufacturing, landscaping. Very few of them have only worked in one sector.

So this idea that we can have sectorally specific programmes, other than in things like agriculture, I just having a hard time thinking that that’s possible. I think we’ve already seen that H-2B [temporary non-agricultural work] and these other programmes don’t work very well.

But there’s no question that, if you take the really broad historical view, there have been unprecedented levels of acceptance in the labour movement of [immigrant] workers, especially given that most of the workers are workers of color, Asian and Latino, but mostly Latino. It’s pretty remarkable.