CAPE TOWN and ACCRA, Jul 11 2009 (IPS) - "We must start from the simple premise that Africa's future is up to Africans," U.S. president Barack Obama told Ghana's parliament. And the keys to that future, as outlined in his speech, include democratic elections, accountability, good governance and strong institutions. 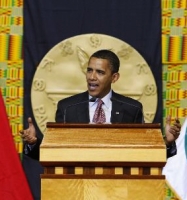 Barrack Obama: 'Wealthy nations must open our doors to goods and services from Africa in a meaningful way.' Credit: U.S. Govt

Excitement was high in Ghana during the week leading up to Obama's brief visit to Accra, his first to sub-Saharan Africa. Posters and a billboard juxtaposing the U.S. president's face with that of Ghanaian president John Atta Mills sprang up, and enterprising traders were selling Obama-themed paintings, cups and fabric printed with the president's face.

Previous visits by U.S. leaders had drawn huge crowds, and there was some disappointment when a late decision over security led to Obama's key address being shifted from Independence Square, where Bill Clinton addressed an enormous crowd in 2002, to the more restricted surroundings of the Accra International Convention Centre.

Alfred Quansah, a civil servant,told IPS, "I watched President Obama on television and it was not like he had really come to Ghana."

But his message – celebrating Ghana's success with elections and the economy, calling for Africans to take hold of their destiny in the 21st century – was well received. Obama said his administration will work to strengthen Africa.

"What we will do is increase assistance for responsible individuals and institutions, with a focus on supporting good governance – on parliaments, which check abuses of power and ensure that opposition voices are heard; on the rule of law, which ensures the equal administration of justice; on civic participation, so that young people get involved; and on concrete solutions to corruption like forensic accounting, automating services, strengthening hot lines and protecting whistle-blowers to advance transparency and accountability," he said.

Africa, yes we can

Ghana will join the ranks of African oil producers next year, and Obama cautioned that this resource will need to be handled carefully, because dependence on export of a single commodity has been a trap for African countries in the past.

"As so many Ghanaians know, oil cannot simply become the new cocoa.

"From South Korea to Singapore, history shows that countries thrive when they invest in their people and in their infrastructure; when they promote multiple export industries, develop a skilled workforce, and create space for small and medium-sized businesses that create jobs."

The U.S. president spoke of the need for a changed relationship between the Rich World and Africa.

"Now, America can also do more to promote trade and investment. Wealthy nations must open our doors to goods and services from Africa in a meaningful way. That will be a commitment of my administration.

"And where there is good governance, we can broaden prosperity through public-private partnerships that invest in better roads and electricity; capacity-building that trains people to grow a business; financial services that reach not just the cities but also the poor and rural areas.

"This is also in our own interests – for if people are lifted out of poverty and wealth is created in Africa, guess what? New markets will open up for our own goods. So it's good for both."

How does history matter?

Obama also extended a theme of Africa's responsibility for its own fate, acknowledging the past injustices of slavery and colonialism while stressing that Africa's own leadership has often failed its people.

But Africa's leaders and their policies have not stood or fallen in a vacuum; and U.S. involvement on the continent has been less than distinguished.

In terms of governance and the peaceful transfer of power, the coup that toppled Kwame Nkrumah, the first president of an independent Ghana, was closely monitored by the Central Intelligence Agency (CIA) and preceded by a strategic refusal of financial assistance by the U.S. to weaken support for Nkrumah's government.

The CIA was behind the assassination of Patrice Lumumba in the Congo which ushered in decades of dictatorship by Mobutu Sese Seko; and U.S. support for Jonas Savimbi's UNITA rebels in Angola and for RENAMO in Mozambique intensified and prolonged bitter civil wars.

On the economic front, the U.S. has been the major voting power within the World Bank and the IMF since their creation in 1948. Those institutions answered Africa's 1980s debt crisis with structural adjustment policies that decimated social infrastructure, catastrophically devalued local currencies, and privatised state enterprises with dubious benefits for the majority.

So it is entirely possible to see the West as an active partner in destroying Zimbabwe's economy, for example, or undermining the provision of basic services like health and access to clean water.

Only two years ago, the U.S. was still retaliating against governments in the South that opted to buy cheaper generic anti-retrovirals – despite such compulsory licensing being in line with rules set by the World Trade Organisation (and the U.S.'s own actions in buying generic anthrax vaccines for its own use).

It is possible to "move on" from the legacy of colonialism and still question the role played by the United States in supporting Ethiopia's recent and disastrous intervention in Somalia, or in providing military advice ahead of failed attacks on Ugandan Lords Resistance Army fighters in the eastern DRC last year. Both interventions have had violent consequences for millions of vulnerable people.

The U.S. is among G8 countries that is fulfilling its 2005 commitments to increased aid at this point, though it set itself a less-ambitious target than many of its peers. But AIDS activists are concerned at the early signs of what the financial crisis may mean for vital U.S. aid to Africa – his administration has asked Congress for 51 billion dollars over the next six years for the Presidential. This would represent a $3 billion drop in annual support for fighting HIV/AIDS in the South when compared to the amount Obama voted for as a Senator.

The U.S. government is pressing ahead in the search for an African base for a regional military command, AFRICOM. In June, the U.S. Senate heard that AFRICOM is involved in counter-narco-trafficking efforts all along the West African coast, and is building a screening facility in Ghana. Obama's administration asked Congress for $850,000 for Ghana's military in next year's budget, up 40 percent from this year.

Obama explained his choice of Ghana for this visit in terms of the positive example the country has set for the rest of the continent, but there may have been other strategic reasons.

The West African refusal to host a U.S. military Africa Command (AFRICOM) last year was stinging setback in the context of the growing strategic importance of the region for the U.S. Increasing amounts of narcotics transit the area en route from Latin America to Europe, and it is also the source of 16 percent of U.S. oil imports – a figure that could well increase as Ghana's production begins next year.

Writing for Pambazuka News, Charles Abugre, of Christian Aid, said, "Obama means more to the world than a mere US politician. He has become a brand, for which, like all brands, there is a massive contestation of the values and meanings underpinning it.

"He means hope, a 'wind of change', the triumph of common humanity, equality of peoples and cultures and many more. But he also means pragmatism, a manifestation of American power, responsibility and interests."

If a new relationship between Africa and the United States is to take shape, along lines of "mutual responsibility and mutual respect" as Obama described it, Africa should take full advantage of the opportunities presented by the present U.S. administration while continuing to ask the hard questions.