KABUL, Aug 20 2009 (IPS) - Afghans are queuing up Thursday to vote in an election that could give President Hamid Karzai a second term. Still, many among them could be wondering if democracy is working for the majority of people. 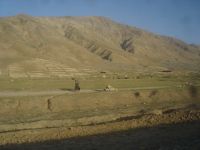 Land grabs are surprisingly simple to carry out for powerful men with guns Credit: Najibullah Musafer/Killid

Far too many Afghan families have been forced from their homes by some of the very government officials whose job is to protect them.

The Ministry of Urban Development (MUD) says that between 1,000 and 1,500 jirib (roughly equal to an acre) of public land where private families reside, have been stolen or usurped by powerful government officials and warlords each day. The ministry says that in all, more than three and-a-half million jirib of these lands have been stolen, a staggering figure.

Yousaf Pashtoon, who oversees MUD, says that these large-scale land grabs are surprisingly simple to carry out for powerful men with guns. “In the beginning” says Pashtoon, “these men usurped the land and then made counterfeit deeds. Now, they make counterfeit deeds first and then according to those deeds, take the land.”

Government officials also took advantage of their position and the chaos in the early years of the U.S. occupation. They used their special access to official maps and property ownership records to enrich themselves. “They made counterfeit deeds during the early years of war” says Haidarzada, Herat’s director of agriculture and livestock. “But these deeds do not have any basis in law.”

Balkh has been a particular target of corrupt officials and powerful men with a taste for other people’s property. According to a local official who did not want to be named in this report, residents of the northern province have seen more than 500 jirib of their lands stolen by the wealthy.

Katib Shams, Balkh’s director of agriculture, said that much of the land was stolen by commanders and governors during the 1990’s and distributed to their supporters. “Many of them did so with counterfeit deeds.” Many of them also still hold important positions in government, and according to a Killid source, continue to hold more than 1,000 jirib of land each.

The problem is much more widespread than just Balkh.

Nangarhar seems to have an epidemic of land theft by powerful men. A court there recently found that 18,000 jirib in Muhmandara, 12,000 jirib in Chaparhar, 8,000 jirib in Surkhord, and more than 10,000 jirib in Behsood district were pilfered.

There are cases pending in court, filed by the original landowners, to get these properties back, but the court says that the process will take time. A special commission has also been formed to find which public lands have been stolen, and return them to their rightful owners.

One resident of Behsood district, Nangarhar, told Killid, “a local commander has taken more than 50 jirib of public land and built a house and garden there.” The resident declined to name the commander, but says that the man is the head of a Nangahar district.

Sadly, the problem of land theft is not a new one for Afghanistan.

Six years ago, government officials in Sherpoor took huge swaths of land and drove the original residents out by force, using bulldozers to demolish the houses. In some cases, residents say, they were still in the homes as the buildings were being destroyed.

At the time, Basir Salangi was a security commander in the area. Under his command, residents say, 30 homes were destroyed.

“We were eating breakfast when we began to feel shaking,” says one former resident of Sherpoor. “We thought that it was an earthquake and the walls were going to fall down.”

Paim-e-Zan magazine reported at the time that some children were injured during the demolition process.

“These traitors robbed and lied,” one woman told the magazine. “They have come to push us from our house. We have been living here for 30 years. Now, they want to build palaces here.”

Some of the government officials and strongmen responsible for this theft still hold high positions in Afghan government. Many of them rent out the properties that they stole, further profiting from their misdeeds.

In all, about 120,000 square metres of stolen land in Sherpoor was distributed to ministers, commanders, ministerial deputies, governors and businessmen.

Former Attorney General Abdul Jabar Sabit has taken action against these men, saying that they violated “Article 285 of the legal code and Karzai decree number 377. These people are usurpers of governmental property and should be taken to court.

(*This is the first of a two-part investigative series on property theft in Afghanistan by Killid Weekly. IPS and Killid Media, an independent Afghan group, have been partners since 2004.)