MALAWI: High-Risk Sex Among Those Who “Do Not Exist”

CAPE TOWN, Aug 18 2009 (IPS) - A study on men having sex with men (MSM) in Malawi shows that, as elsewhere in the developing world, this vulnerable group is at greater risk of contracting HIV and AIDS than the general population. Moreover, their risk status is exacerbated as governments fail to target them for health services or information to stem HIV transmission. 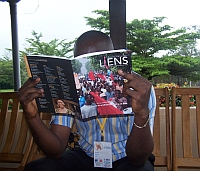 The study was presented at the human rights conference of the recent World Outgames, held in the Danish capital from Jul. 25 to Aug. 1. At the same session it transpired that MSM in developing countries are on average 19 times more likely to be HIV positive than the general population.

In the southern African state of Malawi HIV prevalence is at 21 percent among the respondents – significantly higher than the national prevalence of 14 percent. This was found in a study aimed at establishing HIV prevalence and the sexual behaviour of MSM, a minority group about which very little research has been done, especially in Malawi.

The AIDS Fund draws attention to the hidden nature of sex between men as they are “often hounded and have to live their lives in secret”.

The study in Malawi was conducted among 202 men - a sample of twenty originally recruited from researchers’ own contacts and each then asked to recruit nine or ten other men having sex with men for the survey.

The findings contradicted the popular idea that MSM are poor, uneducated and from rural areas - though this may reflect the methodology used to sample: the majority of those surveyed (73 percent) were from Blantyre; 91 percent had tertiary education. However, only 51 percent were employed, reflecting the high unemployment rate in Malawi and that MSM are more likely to be unemployed.

Four percent had been raped, of which only two cases were reported and one led to prosecution.


In Malawi, homosexuality has been criminalised and sex between men can land you in prison for between five and 14 years, including or excluding corporal punishment. It is thought that some men do not identify themselves as gay or bisexual and persist with relationships with women in order to camouflage their same-sex orientation.

The study, conducted in 2007, points out that politicians and other leaders in Malawi “prefer to project the view that homosexuality is non-existent in the country”. Because of this enforced in-the-closet existence, little information exists and data is hard to come by.

MSM are fearful about being identified – to such an extent that the researchers found it difficult to conduct the study. “The men were reluctant to attend the workshops that we conducted as part of the study. Some did not want to be interviewed either,” one of the authors of the study, Gift Trapence, told IPS in an interview.

Even among those who were willing to participate in the study, extremely low levels of disclosure to their immediate family (seven percent) and extended family (13 percent) were recorded.

Trapence is the programmes manager at the Centre for the Development of People (CEDEP) in Blantyre, Malawi, which is human rights organisation that addresses the needs and challenges of minority groups such as gays, lesbians and men who have sex with men.

The other institutions involved in the study were the College of Medicine at the University of Malawi, Zomba; the New York-based Open Society Institute’s sexual health and rights project; and the department for epidemiology and the centre for public health and human rights, both at the Johns Hopkins School of Public Health in Baltimore, U.S.

Trapence told IPS that, “the prevalence of HIV is high among MSM because there is no intervention to specifically address this group. They have a knowledge gap and they are also not able to access condoms.”

This corresponds with research that showed that “the right to health is denied to many same-sex practising Africans on a regular basis-both directly and through a series of related rights deprivations and violations.

“The actions and inactions of governments, health care providers and foreign donors contribute to HIV vulnerability when same-sex practising people face discrimination in obtaining health care, safer-sex supplies, information or treatment…” This is according to Cary Johnson, the head of the International Gay and Lesbian Human Rights Commission in the book “Off the Map”.

Trapence argued that some policy makers are moving towards acknowledging that MSM exist but politicians, religious leaders and the society at large still find such sex “unacceptable”, hence the invisibility of MSM.

Given the negative consequences of official ignorance, CEDEP has a specific approach to address the prejudice among decision-makers. “Politicians don’t understand things. This is a rights issue. We work with them – rather than competing with them – and use the data to make them understand what we are talking about,” Trapence explained.

The study, which was conducted among 200 men, found high-risk behaviour: some 54 percent had a boyfriend while 47 percent were in a relationship with a woman, including marriage.

Almost half of the respondents had never accessed information on how to prevent HIV transmission during sex with a man. Some 18 percent of the respondents were “afraid to seek health services” while 3.5 percent had been denied health care.

During sex with a female partner or wife, about 20 percent always used a condom; 25.5 percent sometimes; 7.5 percent rarely and 5.5 percent never.